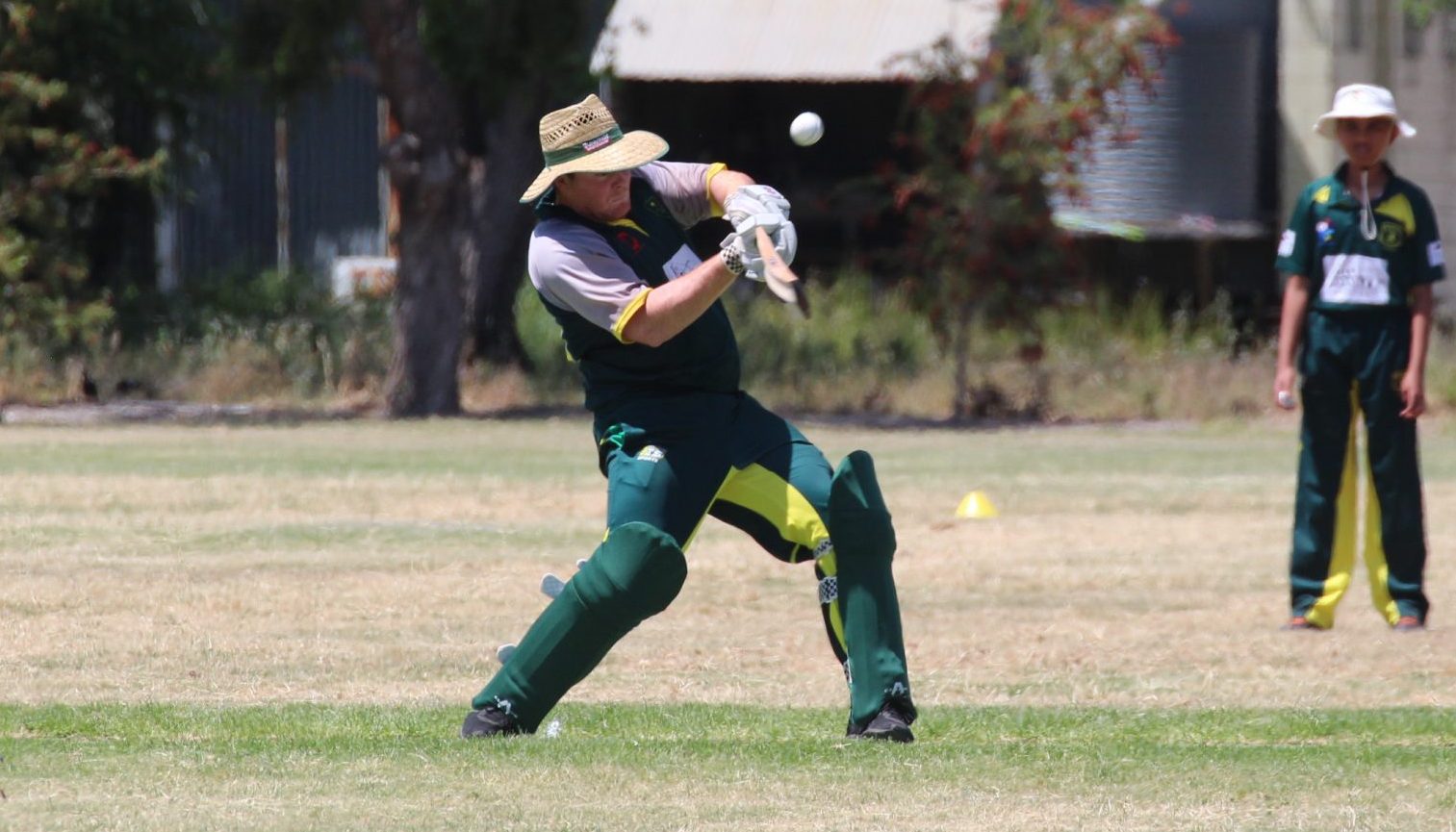 Tatts’ Guy Gleeson smashes a six in his round-high score of 70*.

Tourist Hotel and Western Razorbacks both scored six-wicket wins to start on the front foot.

Tourist Hotel won the toss and fielded first in its game. Opponent Civeo finished on 5-121 after 20 overs, then Tourist Hotel chased that down in 17 overs while losing four wickets.

In the other game, Tatts won its toss and batted first. It lost just three wickets in its 20 overs while scoring 158 runs. The Razorbacks were up to the challenge, chasing that down with just two balls to spare after losing just four wickets.

RSL had the round one bye.

In Tourist Hotel’s win, co-captain Kaleb Mowle opened the bowling and delivered for his side with an economical 1-12 from four overs which restricted Civeo to just 1-34 after nine overs. Mowle claimed the first wicket of the new season in the third over when he bowled Matt Wall (5).

The other four batsmen in Civeo’s top five all reached double figures. Opener Dave McInnes (24) and first drop Mitch Foster (22) both surpassed 20 before number four batsman Sudintha Perera scored a team-best 41. Dumi Weerasinghe then chipped in with 12 from number five.

With the ball, Lucas Hogan (2-32 from four overs) was Tourist Hotel’s only multiple wicket taker in his first match of senior cricket in Narrabri.

Michael Eames (1-23 from three overs), Jarrod Sevil (1-7 from two overs) and Jye Manton (1-8 from one over) were the side’s other wicket takers.

Tourist Hotel lost an early wicket when Mowle (5) was trapped in front by Luke Baker in the third over which made the score 1-14.

That left opener Riley Jenkins at the crease with Lachlan Woolford and the duo combined for a 66-run partnership before Jenkins (40) was bowled by Ayaz Ahmed in the 12th over. That made the score 2-80 and left Tourist Hotel requiring 42 runs to win from eight overs with eight wickets in hand.

In the other match, Tatts’ opening batsman Guy Gleeson steered his side to the big score of 158 with an unbeaten 70 which included nine fours and two sixes.

Gleeson was firing early, scoring 20 runs in the third over to make the score 0-29. He and opening batting partner Ash Watt had Tatts soaring at almost 10 an over after seven overs with the score reading 0-69.

Razorbacks young gun Clay Hoffman was then introduced and had an immediate impact. His first over conceded just one run and he eventually bowled four overs for 0-16 which played an instrumental role in slowing down the Tatts run rate and helping his side set up a reachable total to chase.

Gleeson and Watt’s opening partnership was eventually broken in the 13th over when Watt (47) was run out by Hoffman.

Jakeb Nipperess entered at number three for Tatts and scored 12 runs before the Razorbacks’ co-captains combined to dismiss him. He was caught by Shane Robinson from the bowling of Brandon Couley.

Eben Botha scored 19 runs from number four before being caught by Brendon Smith in the slips from the bowling of Chris Hartnett.

Michael Hewett scored an unbeaten five before the change of innings as Tatts finished with 3-158.

Smith and Angus Galagher opened the batting for the Razorbacks and got the side’s chase off to a perfect start. The score was 0-91 after 10 overs, with the Razorbacks well ahead of the required run rate. Smith and Galagher almost surpassed Gleeson and Watt’s 101-run opening partnership but Galagher was caught by Sanchit Jagadeesan in the Botha-bowled 11th over which made the score 1-95.

That became 2-97 in the 12th when Smith was trapped in front by Nipperess for a team-best 60 runs.

Robinson added eight runs from number three before he was bowled by Botha in the 15th over as the score became 3-113.

With five overs left the Razorbacks needed 46 runs to win with both Hartnett and Couley at the crease. The pair combined for a 36-run partnership which ended in the 19th over when Hartnett (18) was bowled by Dylan Segundo.

At the completion of the 19th over the score was 4-154, which meant that the Razorbacks required five to win off the final six balls. The last over was bowled by Gleeson who conceded four runs before a bye got the Razorbacks to 159.

Couley finished unbeaten on 28 and Harry Pattison chipped in late with an unbeaten two.