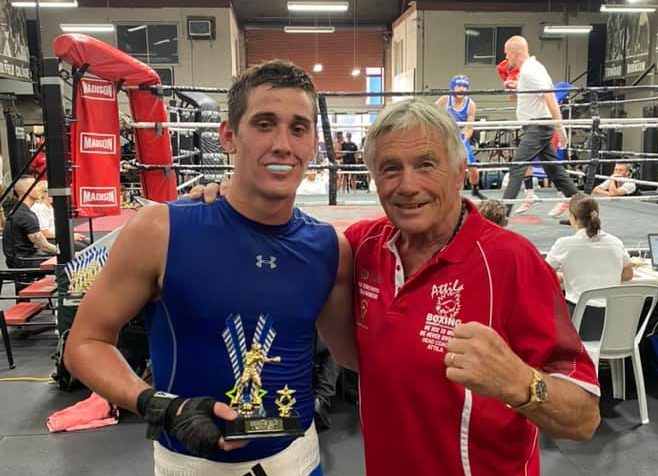 Shannan Davey jumped into the ring on Saturday for the second time in as many weeks, a much shorter turn around between his September 26 bout and his most recent appearance before that which was at the South East Queensland Titles in November last year.

On Saturday, Davey was scheduled to fight Dylan Biggs, an 18-year-old boxer with 83 fights under his belt who is about to turn professional.

However that was rescheduled to Saturday, October 24, so he went head-to-head with 26-year-old Darragh Keogh from Southport Boxing Club who entered his 19th fight with a 16-2 record.

The pair fought a three, three-minute round match at Eastside Boxing Gym in Brisbane.

In Davey’s 29th fight, the former Narrabri boy won by a unanimous points decision to extend his record to 22-7.

Davey dominated the fight and put Keogh down for two eight-counts, one in round two and the other in round three, so it was no surprise at the end of the fight when Davey was announced as the winner.

Davey said that he felt much calmer stepping into the ring on Saturday than he did two weeks earlier following a lengthy lay off.

“I was way calmer after getting the ring rust out two weeks earlier,” Davey told The Courier.

“The nerves are always there, they eat you up a bit but they keep you sharp. If you’re not nervous you’re not human.”

Davey said that he was pleased with his performance.

“I went pretty good,” he said.

“It took me about a minute into the first round to find him out then I really started picking up the pace and landing some good shots.

“I rocked him at the end of the first round and finished strong, that gave me a big confidence boost.

“In the second I boxed well and landed a lot of shots and put the eight-count on him, then did the same in the third.”

Davey’s next fight on October 24 will be on his mum Leeanne’s birthday.

Shannan said that he missed his mum and the rest of his family in Narrabri and added that he hoped the border restrictions amid the COVID-19 pandemic would be lifted soon so his family could travel to watch him fight.

In the meantime though, he said he was in good hands among the crew at Attila Boxing Academy led by coach Attila Kovacs.