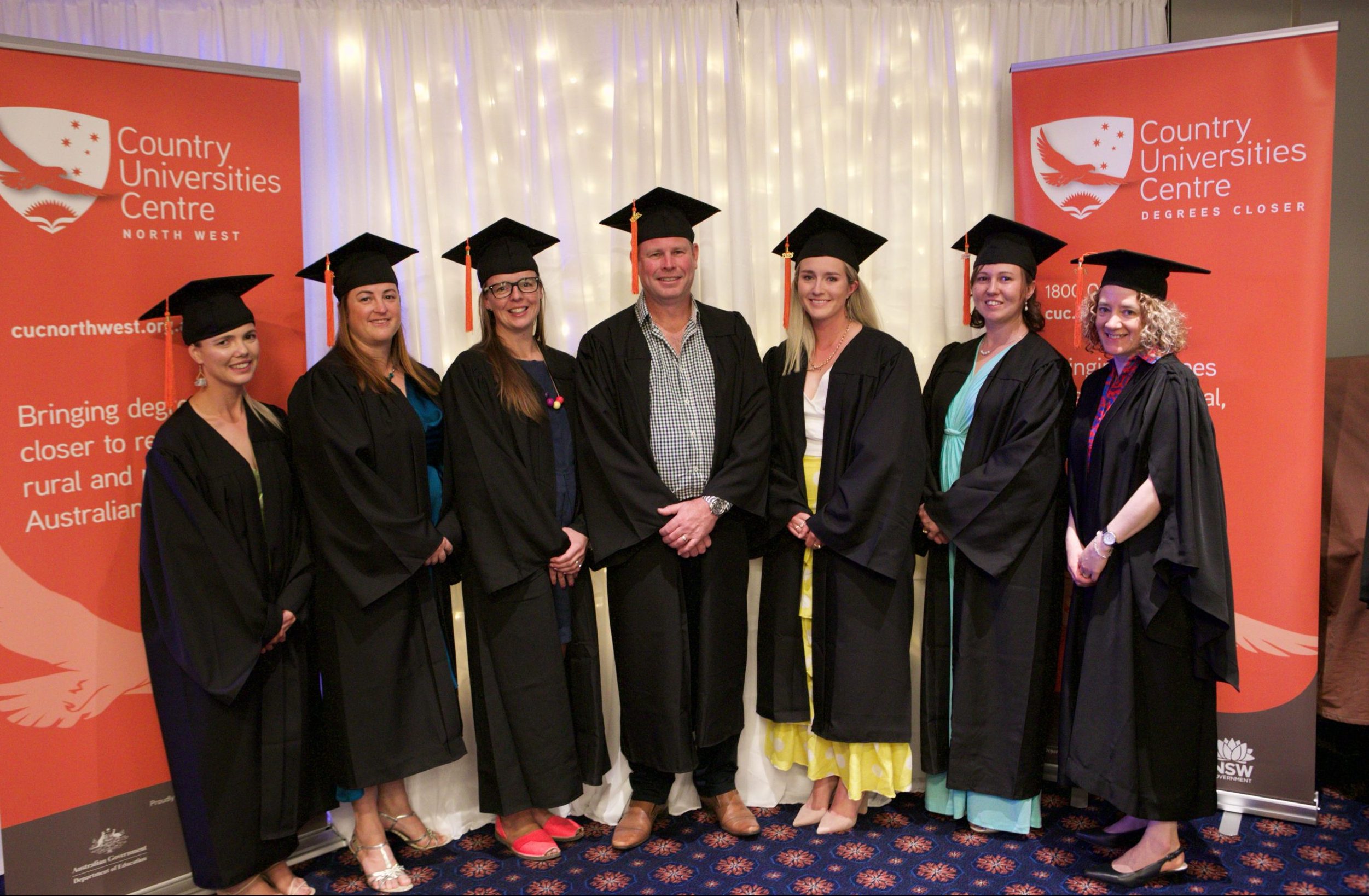 On Saturday, November 28, the Country Universities Centre North West held its inaugural graduation celebration for seven students who had completed their studies this year.

Excitingly, more than 50 participants joined in the celebration, with friends and family members of graduates to reflect on their journey as students.

This year, 18 students registered with the centre completed their degrees at various universities, and six were able to attend the graduation dinner with their families.

At the start of the evening, graduates and families gathered for photos, after which CUC North West Centre manager, Cathy Walters, who was also MC for the event, gave a speech outlining the achievements of CUC North West in its first, full year of operation.

In her speech, Mrs Walters focused on the achievements of the first group of graduates, who had finished their qualifications while juggling career or parenting duties and the demands of employment, further complicated this year by the COVID-19 pandemic.

After the speech, the graduates were presented with a certificate and gift by CUC North West chair, Cathy Redding, and CUC chief executive, Duncan Taylor, who had made the journey from Cooma.

Mr Taylor outlined the history of the network of Country Universities Centres which has been established.

He pointed out that in metropolitan areas between 40 per cent and 60 per cent of residents have a tertiary qualification, but, in regional areas, the number of people with a degree drops to 10 per cent.

Of the students in regional areas who start online study, more than half never finish their degree. The exception is in towns where there is a Country Universities Centre.

In these towns, the completion rate is the same as for on campus students, he said.

She told the room about her disappointment when the campus closed and she was sent home from the University of New England, in Armidale.

Although she was determined to continue studying, she was badly hampered by lack of internet, which meant she could not download her reading or listen to her lectures, she said.

It was then that someone suggested she register with the newly established CUC North West, just next to the library in Narrabri.

For Ms Squire, it was like coming home. All of a sudden, she could study again. She worked hard, caught up with her studies and has never looked back.

Ms Squire has now decided not to return to campus, but to remain in Narrabri and finish her degree externally.

After a toast to the graduates, Bachelor of Commerce graduate Gerri Cruckshank responded with a vote of thanks to the staff at CUC North West, before the cutting of a celebratory cake.

“We are so proud of our graduates. It’s been a difficult year for everybody, but especially students,” said CUC North West Centre manager, Cathy Walters.

“There have been major disruptions to their lives and studies, and our centre has provided them with as much stability and support as possible.

“It is wonderful to help this group of hard-working students celebrate their remarkable achievement, especially since many universities may not be able to host traditional graduation ceremonies this year because of COVID-19.”

The Country Universities Centre North West opened its doors last year to students who are studying online from the Narrabri and Moree districts.

The centre has locations in Narrabri and Moree, and provides students with access to a quiet study space, up-to-date computer technology, fast internet and rooms which can be booked for seminars, group learning activities or exams.

Through the Country Universities Centre North West, students also have access to an experienced tutor, who can help them with their studies, as well as advice on choosing a course and enrolling correctly.