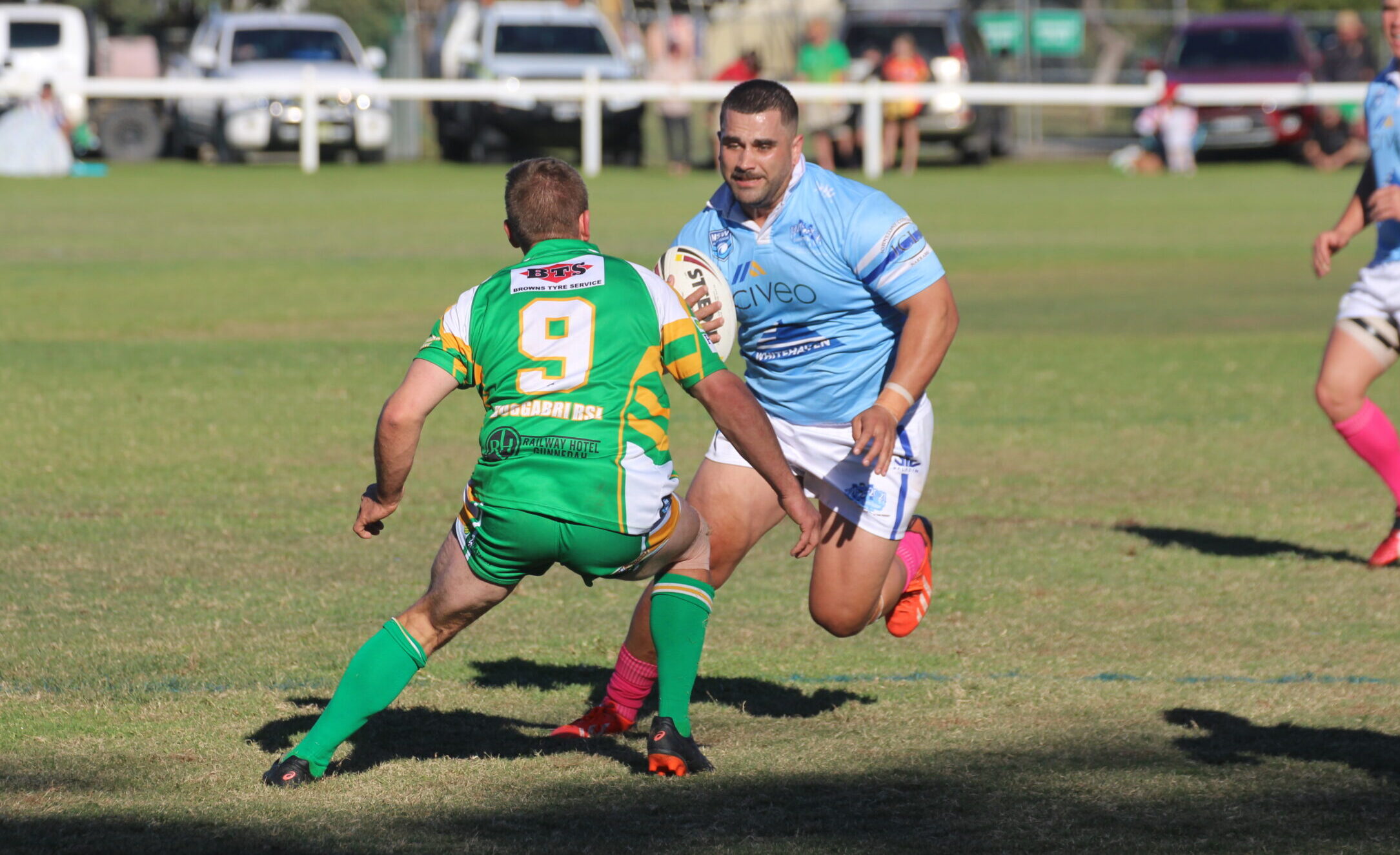 Narrabri Rugby League Football Club front row forward Caleb Binge charges at Boggabri Kangaroos hooker and captain Matt Gilham on his way to his first try for the Blues in 2021 at Collins Park on Sunday.

The Blues outscored the Roos eight tries to four and seven conversions to four in the 22-point rout following 80 minutes of classic, tough country rugby league during which the home side was always in control.

The victory saw the Blues jump to first place on the ladder and finish the weekend as the only undefeated team in the competition after Kootingal-Moonbi Roosters and Gunnedah Bulldogs both lost for the first time this season on Saturday.

The Roosters suffered a 32-8 loss away from home against Moree Boars while Gunnedah went down 26-20 on the road against North Tamworth Bears.

The other round three match was also played on Saturday which saw the Werris Creek Magpies down Dungowan Cowboys 30-24 away from home.

At Collins Park on Sunday, left edge centre Dennis Gordon continued his impressive start for the Blues as he picked up three Group 4 best and fairest points for the second time in three matches.

But it was the home side’s forward pack that dominated the round three fixture as a new signing and a familiar face formed an unstoppable front row partnership.

That duo included Caleb Binge, who scored two tries in his second game for the club and made an abundance of metres, and Daniel Jobson, who scored and assisted a try inside the first five minutes and finished the match with a pair of tries, try assists and Group 4 best and fairest points.

Fellow forward Jacob Nichols produced another top-quality performance which included a try and a try assist as well as a mountain of
defensive work.

Blues captain-coach Jake Rumsby played at lock in his side’s win in place of Jock Small who started at second row in the absence of the injured Sam Sadler.

Rumsby told The Courier that he was pleased with the victory but said his side had a lot more to offer.

“We are starting well but we are still not putting in that 80-minute performance we are looking for,” he said.

“We started giving away the penalties and dropped ball, which I was guilty of again, which let them get a few tries. There were times we were trying a bit too hard.

“But we were always in control of that game.

“I think we are looking good so far and we’re ticking some boxes.

“The forwards were massive today. Bingey (Caleb Binge) was great in his first game of the year and he’s only going to get better which is scary and Jobo again, like I’ve discussed before, he’s so consistent and I love playing with him.

“Brodie (Rumsby) also played his first game and was good off the bench.

“We also have Sammy Sadler and Mitch Dening to come back into the side too which is huge for us.”

Rumsby said that sitting atop of the table was pleasing, but added that the next two weeks would provide a real test for his men.

“Someone told me that if we won this game with the results yesterday (Saturday) we’d be top of the table so we are there now,” he said.

“But it’s still very early and now we need to stay there.

“We’d marked in the calendar our next two games against Kootingal and Gunnedah, they’re the teams to beat apart from Norths.

“A home grand final is what our aim is and we need to finish first to get that major semi at home so these next two games are big for us.”

The Blues take on Kootingal away from home on Sunday in round four before returning home to Collins Park where they will host Gunnedah in round five on Sunday, May 30.

In front of a home crowd on Sunday, Jobson came out firing with a try, a line break and a try assist in the first five minutes of the contest as the Blues established an early 10-0 lead.

The front-rower scored a try between the posts in the third minute then caught the ball off the ensuing kick-off and broke the Boggabri line before passing to Gordon who raced 60 metres up-field to go over for the Blues’ second try.

The hosts scored their third try in the 10th minute when Bell ran onto a Gleeson offload close to the line after the visitors spilled a Bell grubber kick. The five-eighth went over for the try and Hilderson kicked his second conversion to make the score 16-0.

Narrabri extended its lead to 22 unanswered points just after the 20-minute drinks break when Binge charged over from close range, shrugging off four Boggabri defenders to register his first try of the season for the Blues which Hilderson converted.

The Kangaroos hit back seconds later after Narrabri coughed up possession with a wayward offload during the next set. Josh Trindall kicked the loose ball into the in-goal area and won the race to the ball. The former Blues gun grounded for the visitors’ first try which another former Blues player, Rob Doolan, converted to make the score 22-6.

The halfback then turned provider in the 33rd minute when he combined with another former Narrabri man, substitute Rob Condran, who ran onto a Trindall short ball close to the line and shrugged off several defenders to force his way over. Doolan kicked the conversion from five metres inside the right sideline to reduce the deficit to 10 as the score became 22-12.

After conceding two tries and letting the Roos get back into the contest, the Blues fought desperately to swing momentum back in their favour and a 37th-minute penalty did just that.

The hosts kicked for touch which set up an attack deep inside the Boggabri half. Nichols then caught the Kangaroos’ defence napping with a quick dart out of dummy half as he charged through a hole close to the line. The Narrabri hooker went over just outside the left upright and Hilderson converted to make the half-time score 28-12.

The Kangaroos knew they needed to score first in the second stanza and they did just that when skipper Matt Gilham charged over out of dummy half close to the line. Doolan added the extras with his third successful conversion which made the score 28-18.

But once again, the Blues extended their lead to 16 points when Jobson stripped the ball from an opposition player in the in-goal area after chasing down a grubber kick. He took possession and dropped to the ground, planting the ball down for Narrabri’s sixth try. Hilderson kicked the conversion to make the score 34-18.

The game’s scoring continued to see-saw as the Kangaroos claimed their fourth try of the game in the 58th minute when Doolan crossed in the left corner. He kicked the conversion from the sideline as the score became 34-24.

But once again, the Blues responded in style with the game’s next try. Front-rowers Jobson and Binge continued their dominance when they combined for the four-pointer as Jobson threw a short ball out of acting dummy half close to the line to a rampaging Binge who did the rest. Hilderson then kicked his sixth conversion to put the Blues ahead by 16.

The home side put the icing on the cake with six minutes left to play when Gleeson scored an 80-metre runaway try.

Boggabri was attacking the Blues’ line before an offload went to ground and Nichols reacted quickest, diving on the loose ball then getting to his feet and finding Gleeson who was supporting on the inside. The fullback flew up-field and was too quick for the chasing Boggabri defenders as he scored under the crossbar to allow Hilderson to make the score 46-24 with the simplest of conversions.