Tribunal considers recognition for war casualties and their families

Regarding the inquiry into recognition for members and families of members of the Australian Defence force who are injured, wounded or killed in or as a result of service.

The Defence Honours and Awards Appeals Tribunal (the Tribunal) is directed to inquire into the subject under reference.
In particular, the tribunal is to seek and receive submissions and consider whether it is appropriate that members of the Australian defence force who are injured, wounded or killed in or as a result of service, or their families, receive an Australian honour or award, or another form of recognition.

The tribunal is to report, in writing, to the minister for defence personnel on the findings and recommendations that arise from the inquiry.

Submissions to the tribunal closed on March 31.

I sent a comprehensive ten-page submission and was invited to provide my oral submission via teleconferencing on May 12.

The tribunal panel consisted of five members including a retired rear admiral and a retired
major-general.

I pointed out that many Vietnam veterans were ‘medivaced’ (medical evacuation) back to Australia suffering terrible physical and mental injuries and life-threatening diseases.

These were not classified as combat battle injuries and if they failed to serve the qualifying time did receive a foreign campaign medal.

Those who were ‘casavaced’ (causality evacuation) back to Australia because of battle injuries, irrespective of the number of days in Vietnam, were automatically awarded a foreign campaign medal.

In both situations the member was not identified as being wounded, injured etc.

In addition, those seriously wounded or killed in training (before they were deployed) were also not recognised.

Then we need to consider the families of these members.

I also covered the topic of post-traumatic stress disorder and its implications when determining ‘wounds’.

My proposal is not to issue any more certificates that often accidently are destroyed or sit in drawers.

We need something tangible to signify the aspects outlined above. Perhaps something similar to the oak leaf currently used for mention-in-despatches – using different colours to signify killed in action (KIA) and wounded in action (WIA) during deployment and those KIA and WIA whilst in training.

With regard to families (next-of-kin) I suggested a small silver brooch (or something similar akin to those issued during World War II) that could be worn on Anzac, Remembrance and Vietnam Veterans’ Days or whenever.

These days, more and more emphasis is placed on securing service and campaign medals for past family members and these medals tell a story.

With the addition of my suggestion, the story is enhanced to perhaps encourage the younger generations to commence further research.

The results of this inquiry will be posted on the tribunal’s website in due course.

The recent Courier article suggesting it’s time to plant out our main street roundabout and tree plot garden beds with some bright flowering plants has sparked the interest of Narrabri’s gardeners. A reader suggested the only feature remaining to make our main street a ‘showpiece’ was the addition of some vibrant colour from flowering plants. “Inverell is known for its floral displays and it’s time we put the same effort into making our main street the best it can be,” our correspondent said. “It would be a shame to spend all that money on the roadwork and leave bark chips […] 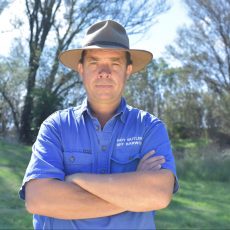 In recent weeks we have seen teachers walk off the job across the electorate and the state. Teachers have felt they had no other option but to stop work to highlight the chronic teacher shortage in our schools. In our high schools our kids are spending multiple periods a day without a teacher missing out on valuable learning opportunities. In recent weeks I have met with the NSW Teachers Federation, who fear this situation is only going to get worse as we come into winter. Sadly, the NSW Department of Education has been asleep at the wheel on this issue. […]

Do you have US civil war ancestors buried in Australia?

My name is James Gray, I am 81 years of age and I am writing to The Courier in the hope that you will help correct a great injustice for prior Australian war veterans. During the American Civil War, 1860 – 1865, a number of Australian citizens served with American Union military regiments and after living out their lives and dying in Australia as recognised war veterans, they were unceremoniously buried in unmarked gravesites. I am working to acquire a “free” upright marble headstone, or a personalised bronze memorial plaque, from the American Veterans Administration for each of those forgotten […]