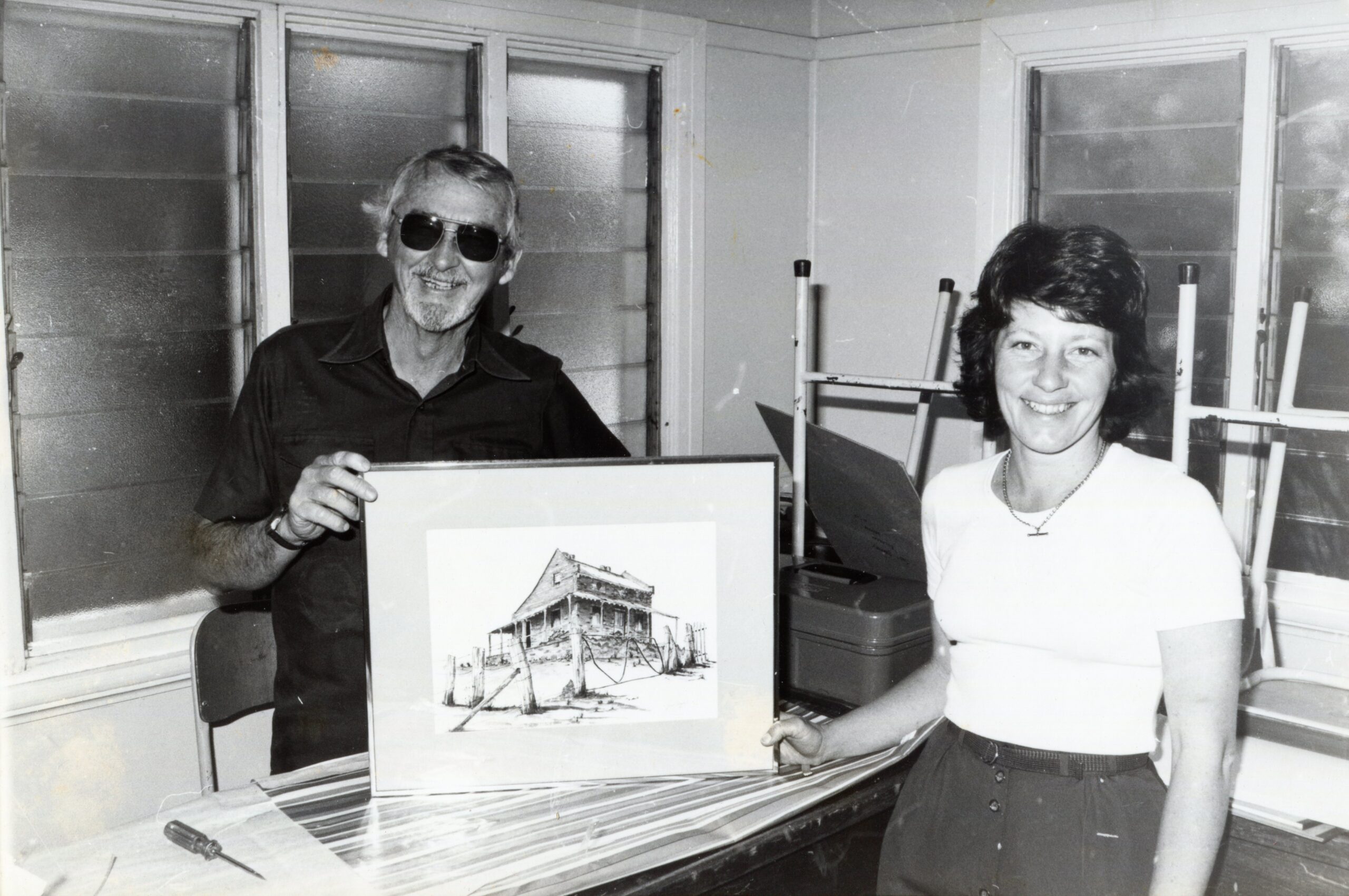 Peter Chapman and Janet Dampney, at TAFE at art classes held by Peter during the 1980s.

In 1866, Edward was born at Yankalilla, a small historic agricultural town situated on the Fleurieu Peninsula, South Australia.

Edward’s parents had migrated from England; his mother Selina, nee Tonkin, migrating with her parents in 1845, and Edward Jeffrey Snr migrating in 1849.

Edward and Selina later moved to Victoria where Edward Junior grew up and eventually married Eliza Collett in the small hamlet of Hinnomunjie in East Gippsland.

When Edward was 25-years-old, he and Eliza moved away from Hinnomunjie to open a general store in Wee Waa.

At this time a railway line was being constructed between Narrabri and Burren Junction, and the population was increasing considerably.

To the young couple, Wee Waa seemed the ideal place to open a store.

They were accompanied by their two young children Hazel, aged two and Roy, only a few months old.

After moving to Wee Waa they had a further four children.

Tragically, their son Cecil, born in 1893, died at three years of age.

They later had Harold, known as Jeff, and his unnamed twin, who sadly died shortly after birth (born in 1897) and their younger daughter, Hilda (born in 1901).

Edward operated the general store in Wee Waa for nearly three decades until it burnt down in a fire in the early 1920s.

In 1904 Edward and Eliza drew a land grant, a block of land at Burren Junction which they named ‘Omeo’ and the family lived here for many years.

Their elder daughter Hazel grew up and married George Gray of ‘Glencoe’.

Their son Harold married Agnes Constable and their daughter Hilda married Milton Constable (a marriage which ended in divorce).

In 1921, Edward and Eliza were struck with tragedy when their oldest son Roy, was thrown from a horse and died at 32 years of age.

My father said he often went out to ‘Omeo’ in later years.

The family held a reunion many years ago and we all went to ‘Omeo’ to visit the old home.

The Simshausers owned it at that time.

By an amazing coincidence, we discovered they had purchased one of my paintings and there it was, hanging in the old Jeffery home, a nostalgic connection to our past.

My father Herbert Jeffery Rynhart (known to all his friends as Herb) was by now an orphan.

Edward made the journey to Melbourne and brought the orphaned Herb back with him to Wee Waa in 1926 to live with Hazel and her husband George.

From that time on, Dad made his home with the Grays – his Uncle George and Aunty Hazel, at ‘Hawthorne’ in Wee Waa.

His childhood was spent with their two children Edward (Ted) and Margaret.

Margaret and Allan made their home at ‘Rayleigh’, Cryon.

Growing up with Ted and Margaret meant the children became more like Dad’s brother and sister than his cousins.

Because of this, when I was born Margaret insisted she was to be called my Aunty, and not a cousin.

So henceforth, all of Dad’s cousins were referred to as aunties and uncles by my family.

The family had already demonstrated a commitment to serve their country.

Edward and Eliza’s sons Roy and Harold had previously served in France in the AIF during the first World War.

And later, when the Second World War came to pass, Harold, Ted, and my father Herb all served in the RAAF.

Herb married my mother, Margaret Elliott on July 3, 1943 and after the Second World War was over, they settled at ‘Tunstall’, Wee Waa.

Mum had grown up in the Newcastle area, had undertaken teacher training at Armidale Teacher’s College, and had started her teaching career in Moree.

When she arrived to live in Wee Waa and start her new job teaching at the Central School, that is how mum and dad first met.

They married and had two daughters, me and my younger sister Susan.

Walter Weaven was another nephew of Edwards who came and settled at neighbouring property ‘Blackburn’.

He was bricklayer by trade and has a history embedded in the town as interestingly he built the memorial clock in Wee Waa’s Rose Street.

My father said Walter also built many brick chimneys installed in houses around the district.

There were no school buses in our primary school days so my mother taught Susan and I at home.

Lessons would arrive packaged up in the mail from Blackfriars Correspondence school.

A school bus started to run when Susan started 4th class, so from that point on she travelled into Wee Waa Central School.

We both went to boarding school at PLC Croydon for our high school years, as there were no school buses at the time into Narrabri High School.

In those days there were no bridges over the Narrabri or Wee Waa creeks.

If the creeks came up, we could not get to town, and added to this, it was also the time of no tar on the Kamilaroi Highway.

I have fond memories of Mum and Dad taking us to ballet classes at the CWA hall in Wee Waa.

We used to attend a girl’s club at the School of Arts hall run by Mrs Brown, and at the time Mrs Brown’s husband Tom owned and printed the Wee Waa newspaper the Namoi Valley Echo.

We also used to go to Sunday School at the old Presbyterian Church so we could mix with the other children.

I enjoyed my days at ‘Tunstall’ and used to love getting about the farm with Dad, often spending my spare time with him, helping with jobs and taking an interest in farm work.

One day, however, we had a mishap that could have been an unmitigated disaster.

I was often with him travelling around the property in an old truck with no doors.

Dad has regaled his horror story of how one day I was looking out at the cows, accidently fell out of the truck, and ended up under the wheels.

I suffered a fractured femur and pelvis and badly damaged knees.

After this I was in plaster from armpits to toes for three months – Dad would tell me how he was so frightened he had killed me.

I was only about four years of age when this happened.

Nowadays, when I hear stories of young children tragically killed in similar farm accidents, I consider myself to have been very lucky indeed.

After I completed my leaving certificate at school in 1965, I applied and was accepted to start my nursing training at Royal North Shore Hospital.

To work and study at RNSH one had to have passed the leaving certificate and be 18 years of age.

As I did not turn 18 till late 1966, I couldn’t start my training until around Christmas time.

To fill in time I stayed with Aunty Bell (Bella Gray) in Narrabri and went to TAFE at the old Gallipoli House building to do a secretarial course. (Dad told me in no uncertain terms I could not stay home and do nothing!)

The years at RNSH passed by quickly and I graduated in mid-1970.

I thought I would like to come home for a while after all the years of being away at boarding school and studying nursing in Sydney.

It was the old hospital, so that was a bit of a culture shock after coming from such a large hospital as RNSH.

But I enjoyed my time there.

At the end of 1970, I started working at Narrabri Hospital, as a vacancy had come up and at the time I just happened to have begun to go out with Peter Dampney.

Peter lived at ‘Billabong’, out on the Gunnedah Road near Narrabri.

I was working at Narrabri Hospital when the 1971 January floods hit the town, and that was an experience I will never forget.

I am sure there are many of my fellow nurses who will remember that time.

Peter and I married in August 1971, settling at ‘Billabong’, and had two children, Tony and Joanne.

I did a lot of casual work at the hospital over the years in between children, until we moved from ‘Billabong’ to ‘Junefield’ at Edgeroi.

Peter was heavily involved with the Narrabri Pony Club and the children loved riding.

I also loved my time helping out with all the pony club activities.

We were both extremely involved in the Narrabri Show over the years.

Peter was a past president, plus held other positions, and I took part in various jobs in the show such as publicity officer and Showgirl organiser, added to many other positions over the years.

I have in later years, thoroughly enjoyed attending TAFE, doing computer courses and art with Peter Chapman and digital photography courses with Denis McNamara and many other teachers.

I used to exhibit a lot of paintings around the North West district.

My preferred media was acrylic, pen and ink and water colours.

Life, as it does for many, gets in the way, and as I always took photos for my art works, when the digital era came in, photography took over as my main artistic outlet.

A few of us have formed a photographic group, called Capturing the North West and we embark on various outings to take photographs.

COVID interrupted that last year, but the group is very much looking forward to enjoying a return to this hobby. 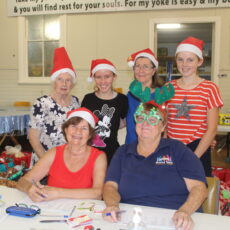 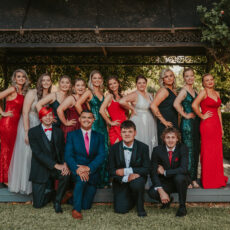