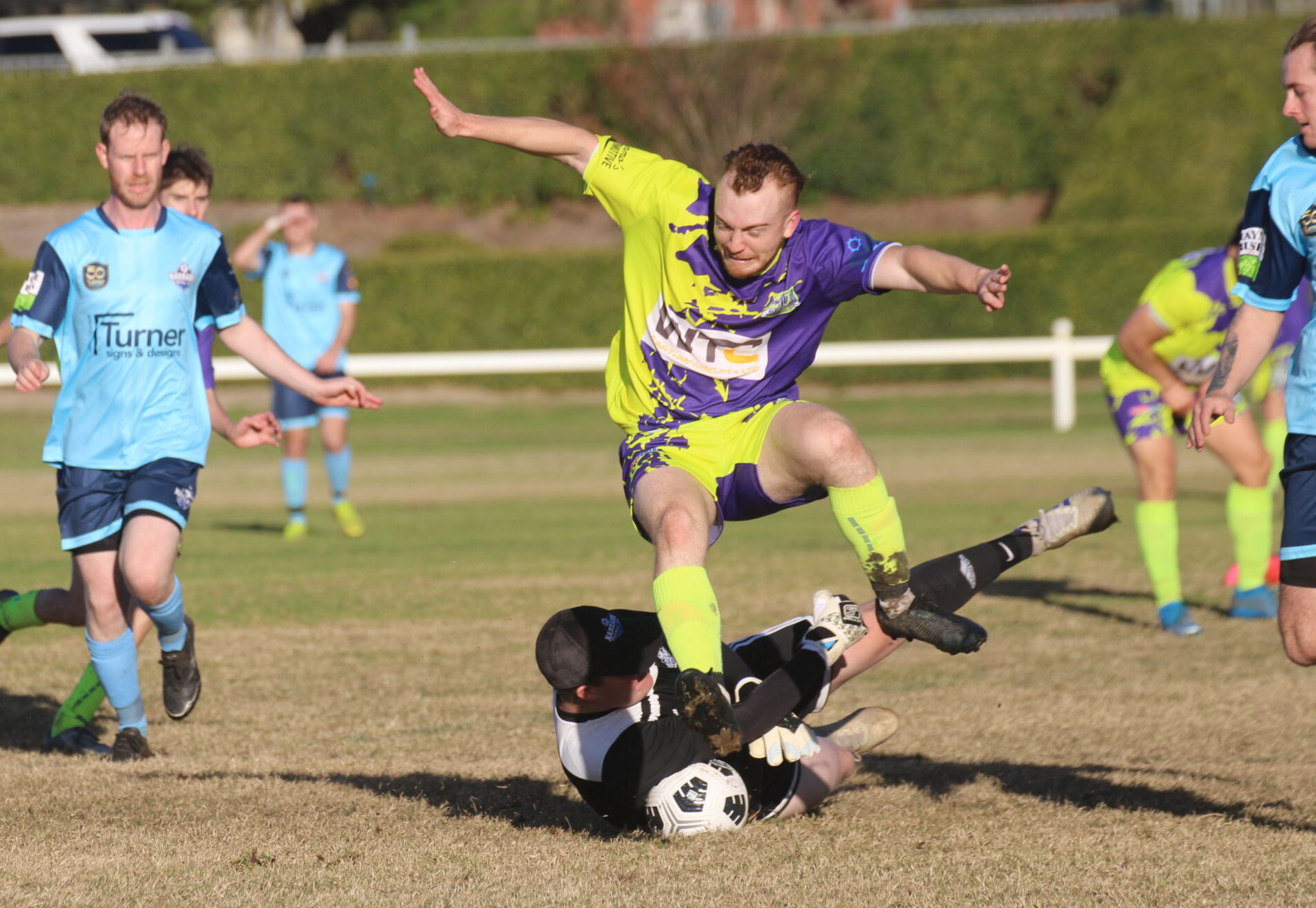 Narrabri FC first grade co-captain and goalkeeper Zaac Brayshaw kept his fourth clean sheet of the season in a 3-0 derby win against Eleven FC at Hogan Oval on Saturday. Brayshaw is pictured above sliding in to deny Elevens winger Bailey Campbell a goal. Photo: Tracey Tomlinson

The ladder leaders have now won all 10 of their games this season, the latest of which was a 3-0 derby victory against local rivals Eleven FC.

That match was played in cold, wet and muddy conditions at Hogan Oval on Saturday.

Neither side was able to break the deadlock in the opening 45 minutes as the score was locked at nil-all at half-time.

Both sides’ defences were up to the challenge presented by their opposing attacks, while goalkeepers Jakeb Nipperess (Eleven FC) and Zaac Brayshaw (Narrabri FC) were at their brilliant best between the sticks.

With 25 minutes to go, the deadlock was finally broken when Narrabri FC skipper Cooper Brayshaw found the back of the net.

His initial shot was saved by Nipperess but the Elevens could not clear the loose ball and it fell to Brayshaw who, while on the ground and facing away from goal, kicked the ball over his shoulder and into the back of the net.

Cooper’s brother Jake Brayshaw netted the goal of the game with a cracking 20-metre strike in the 75th minute before the pair linked up for their side’s third on the 89th minute when Cooper squared up a pass to Jake who scored a one-on-one strike from close range to make the final score 3-0.

Narrabri FC’s coach Neil Brayshaw said that he was pleased with his side’s second-half performance after what he described as one of its worst halves that he could remember in the first.

The other round 11 match was won by Wee Waa United which downed Moree Services FC 2-0 in Moree.

Just like at Hogan Oval, neither side was able to break the deadlock in the opening 45 minutes in that game as the sides went into half-time locked at nil-all.

Matt Hamblin opened the scoring about 15 minutes into the second stanza before Hayden Shearin added the second which secured the travelling team its fourth victory of the season.

That win saw third-placed Wee Waa moved to 12 competition points, just one behind second-placed Moree Services FC although Wee Waa has two games in hand on the higher-ranked side after its round nine and 10 matches were washed out and rescheduled.

Last season’s grand finalists the Elevens are now eight points behind Wee Waa in last place and face a tough task to finish in a top-three spot.

At the top of the table, Narrabri FC cannot be caught by either the Elevens or Moree and it now requires just one point from its final five matches to bring an end to the minor premiership race.

It will have a chance to achieve that this Thursday when it hosts Wee Waa United at Hogan Oval in a rescheduled round 10 match.

Wee Waa struck first in Moree when Jay Hall netted to put the visitors in front, but the hosts equalised late in the first half to make the score 1-all at the break.

Moree then piled on three second-half goals to claim all three points.

Moree is currently first on the ladder in that competition with 30 points, 10 clear of second-placed Narrabri FC.

Wee Waa is third with six points and the Elevens are last on two points.