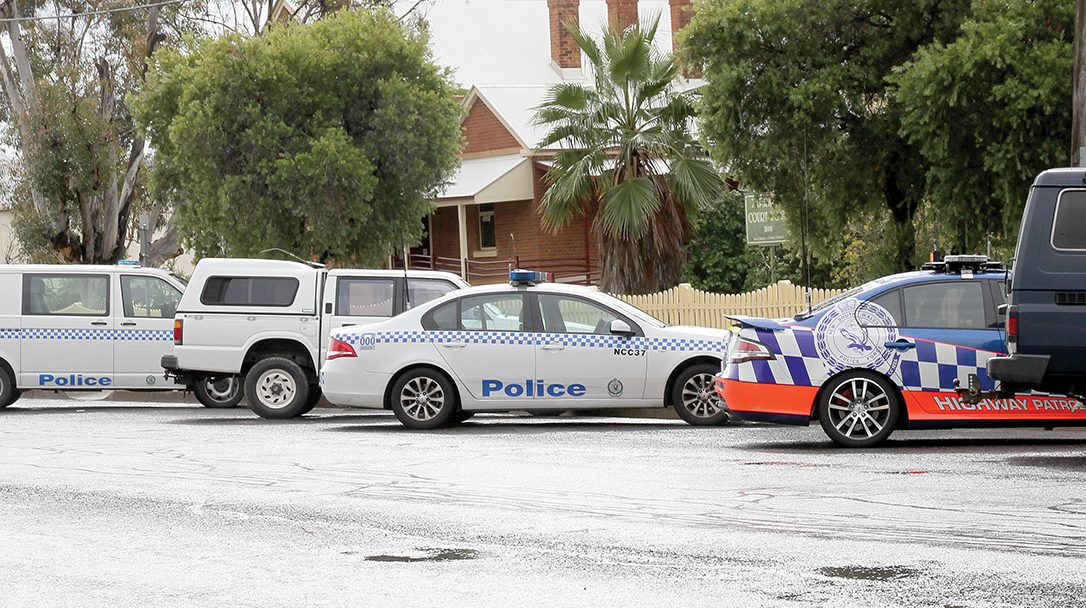 A 50-year-old man has had his licence suspended after a high range drink-driving detection.

Police stopped the man on Barwan Street at 4.30pm on October 11.

The man was subject to breath test analysis and police allege he returned a reading of .249, almost five times the legal limit.

His driver’s licence was suspended and the man will appear in Narrabri Local Court.

Spotlights were stolen from a prime mover vehicle at an industrial business on Cooma Road.

Between 5pm on October 12 and 8am on October 13, spotlights were stolen off one vehicle and thieves attempted to do the same with a second vehicle.

Police have said the theft of spotlights is not uncommon and urged people to consider using self locking nuts in an attempt to stop potential thieves.

Police are investigation alleged breaches of the public health order at a Cooma Road business.

The incident occurred at 1.15pm on October 13 and is believed to have happened as a person attempted to pay for goods.

The person allegedly became agitated and aggressive when asked by staff to check-in to the business using the QR system as well as wear a mask when inside the premises.

Police are investigating the incident.

Signage along Maules Creek Road, at Tarriaro, was reportedly damaged in October.

The road traffic signs were significantly damaged and required replacement.

A break-and-enter was reported at a Taylor Street home in Narrabri.

After waking up in the early hours of the morning, the resident of the home noticed cards and a wallet on a floor.

Police seized items from the home for forensic investigation.

The rear window of a vehicle in Fitzroy Street was smashed in the early hours of October 19.

The victim saw someone in the vehicle and reported the incident to police.

When police arrived, they discovered the rear window had been broken and a vehicle door was open.

A 63-year-old man had his licence suspended after a mid range drink-driving detection.

The man was subject to breath testing after being stopped on Barwan Street at 9.12am on October 21.

The accused man admitted to consuming a quantity of alcohol the night before. He returned a reading of .084.

Police have reminded provisional licence holders that they a required to have no alcohol in their system when operating a vehicle.

It comes after a 20-year-old man had a special range drink-driving detection.

The man was stopped on the Newell Highway near Narrabri at 10.52pm on October 22.

While he returned a reading of .027, he was found to be in breach of his provisional licence conditions which requires a zero blood alcohol reading.

A 35-year-old woman was found to have breached the public health order after being discovered in Narrabri while positive with COVID-19.

Police attended an address on October 22 for an unrelated matter.

Subsequent police inquiries revealed the woman had been a COVID positive patient and as a result was subject to the stay-at-home direction under the public health order.

The woman was issued with an infringement of $1000 for not complying with a noticed direction.

A man is alleged to have returned a positive drug detection after being stopped by police on Mooloobar Street on the morning of October 24.

The man allegedly returned a negative breath test and a positive saliva test.

He was conveyed to Narrabri police station for secondary testing. Police are awaiting the results from further analysis.

A theft from a motor vehicle was reported at a Maitland Street business between 4.25am and 4.50am on October 25.

A thief is alleged to have stolen shearing equipment and paperwork from a vehicle which was located in a car park.

The man is described as being Aboriginal, wearing a navy jumper with a hood and NSW on the front, with a white motif, black track pants and khaki laced boots.

Anyone with information that might assist the police investigation in relation to this matter is asked to contact Narrabri police station on 6792 7199.

Information can also be reported online through the Crimestoppers website.

A break-and-enter was reported at a Maitland Street property in Wee Waa between 6.30pm on October 7 and 11.30am on October 8.

An unknown person, or persons, gained entry to the property through a groundfloor window.

Precious gems are believed to have been stolen from the property.

The incident has been subject to forensic analysis.

A break-and-enter with intent was reported at a rural property at Spring Plains Road, Boolcarrol, between 11am and 11.10am on October 13.

A Holden Commodore and people wearing hoodies were sighted at the property.

Police said it appeared that persons of interest entered the home via a glass sliding door.

No property was stolen as a result of the incident.

A man was stopped by highway patrol on the Newell Highway, at Edgeroi, and is alleged to have returned a positive detection to methamphetamine.

The man was stopped in the early hours of the morning on October 12.

He was subject to secondary testing at Narrabri police station.

Police are awaiting results from further analysis of the sample.