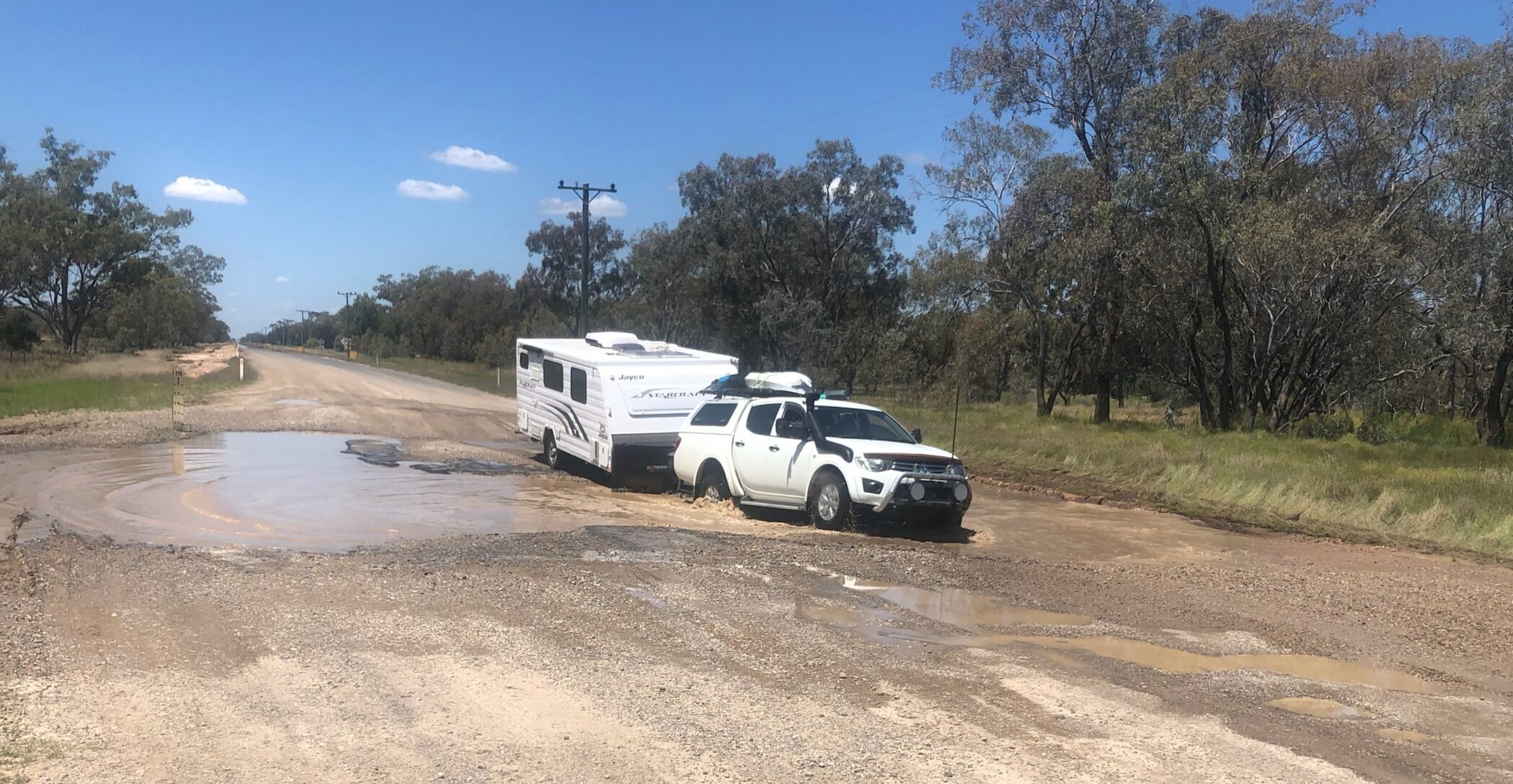 The Courier recently received concerned reports and photographs from readers about the “dangerous” condition of the causeways on the Pilliga Road.

Narrabri Shire Council will receive funding for upgrade works on the road, however, is waiting for a funding deed to start the construction.

Mr Lowder is a former councillor and was also a bus driver for more than 50 years, so he knows the region’s roads like the back of his hands.

“The causeways just shouldn’t be allowed to get to this state,” said Mr Lowder.

He said the council had a “duty of care” to fix the road to prevent a serious accident.

“Emergency works should be undertaken immediately.”

Mr Lowder said the state of the road was particularly worrying for anyone driving a conventional vehicle, and not a four-wheel-drive.

He also raised fears about people travelling at night who were unfamiliar with the state of the causeways.

“The road is not safe to travel on,” Mrs Cruickshank said.

“There are four causeways that require a four-wheel-drive to get through.

“A gentleman was travelling on the road towing a trailer and ended up in a tree due to the trailer getting caught in the mud and fishtailing.

“There have been two instances where cars have become bogged and had to be pulled out.

“There are many residents, including our elderly citizens, who do not have 4WD vehicles, which is what is now needed to be able to drive safely on this road.

“The school bus is also having difficulty, with the back end of the bus getting stuck when going through the ‘waterholes’ that are now in the middle of the road.

“With harvest upon us the road is going to be torn up further with the grain trucks going backwards and forwards. Added to this is now the normal b-double and triples that are travelling up the Coonamble road and going to Wee Waa.

“These truckies do not slow down as they do not know how bad the road is,” said Mrs Cruickshank.

“We are going to see a lot more rain over the next few months, we only need 30 millimetres to fall in the wrong spot and we have rivers crossing the road.

Imagine driving along and going through water where the holes could swallow a small car.

“Thank you and please can we get something done about our road.”

Mrs Cruickshank said the road has been causing problems for some time, which is why she lodged a complaint with council.

Over the last week, she said NSC workers have started to fill the causeways, with ‘large rocks’.

She said the rocks weren’t compacted and were still causing issues, and drivers were concerned about their tyres.

On Monday, November 1, Mrs Cruickshank said dirt had been put over the rocks and the road was looking better.

“I think this is as good as it’s going to get until they properly fix the road.” The Wee Waa News contacted council for comment and was provided with a Pilliga Road update.

“This Pilliga Road is a crucial arterial road for connecting our communities and freight movements across Narrabri Shire,” said mayor Ron Campbell.

“The overall upgrade aims to mitigate a number of issues along a 21.2 kilometre stretch of the road.

“Council has lobbied for and been successful in having the Pilliga Road identified as a road of strategic importance; within the federal government Roads Of Strategic Importance program.

“Council is fully committed to supporting an ever-growing demand for safe, productive freight movement and the proposed upgrades to Pilliga Road align with a number of government priorities and strategies.

“The upgrade works are ‘shovel ready’, with council unable to commence works until receiving authorisation from the funding body responsible for funding the upgrade works.

“Currently, council is awaiting a funding deed, which is required to be signed off by the relevant government department.

“Until this deed is received, council cannot commence the identified upgrade works.

“This places council in ‘maintenance mode’; which involves council undertaking weekly maintenance consisting of tar patching on the worst sections of the road which is acknowledged as a short-term fix.

“Council understands the frustrations of the community who frequently travel Pilliga Road.

“This road is shared by the community, school buses, and is a major freight route.

“Council views this project as a major priority in the shire road network and is ensuring every avenue is being pursued to obtain the funding deed as a matter of urgency so works can commence.

These works have been designed to withstand not only local traffic but frequent freight traffic.

“The Pilliga Road provides a critical arterial road for freight movement for Narrabri Shire, as well as neighbouring shires and is utilised for transport of a range of products including grain, livestock and cotton.”