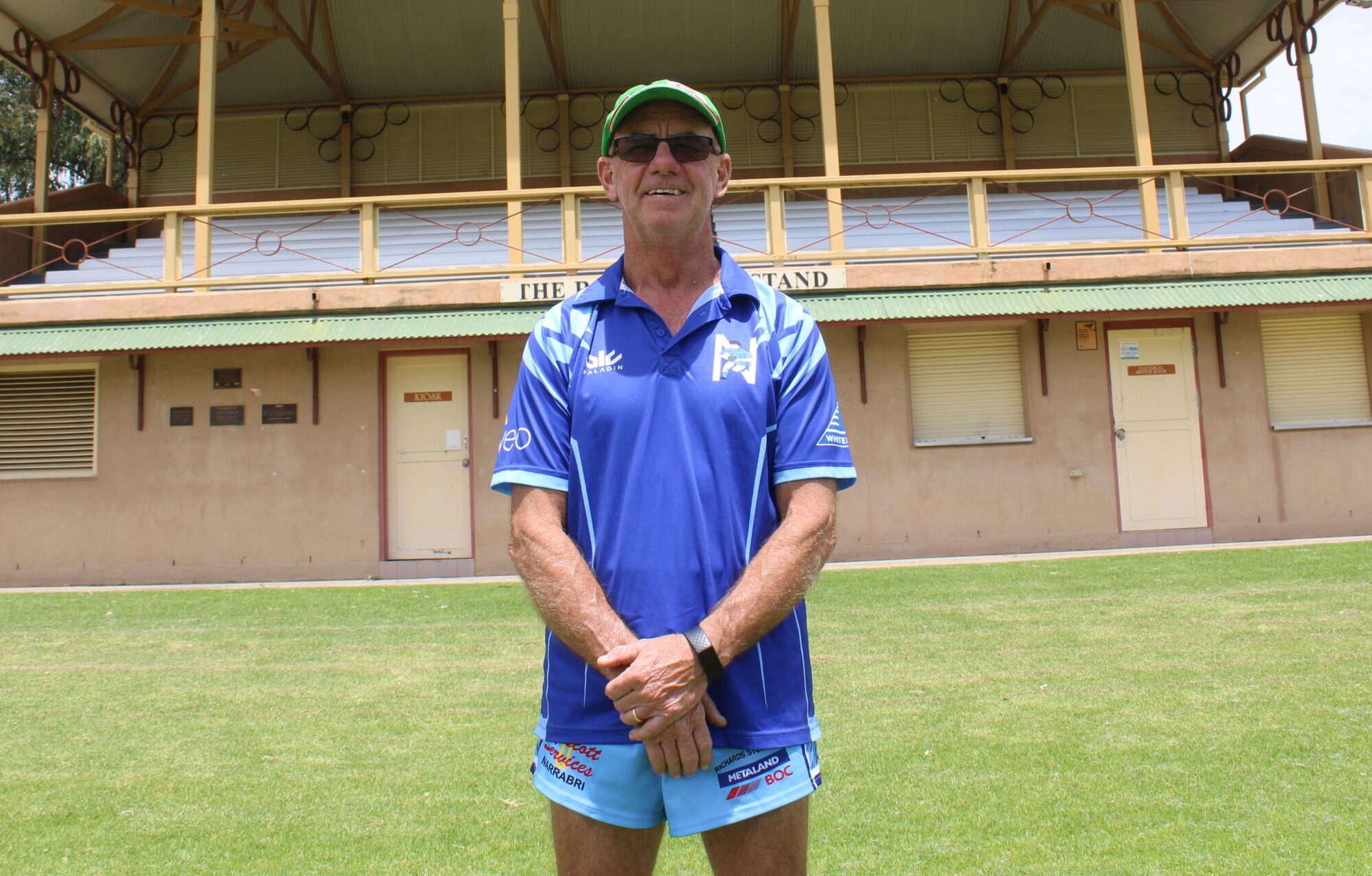 Narrabri Rugby League Football Club trainer, life member and five-time clubman of the year Pat Mowle, pictured at the Blues’ home ground Collins Park, recently announced that his time with the club had come to an end.

Pat Mowle’s response to an interview request with The Courier following his announcement that he was hanging up the boots and would no longer be a Narrabri Blues trainer in 2022 was a true reflection of his many years of service and dedication to the club.

The Narrabri Rugby League Football Club life member is a humble man who does so much for others, both in and out of the rugby league arena, without expecting anything in return.

“I don’t want to make this all about me,” Mowle said.

“I’ve done it because I love the club and the players, not for praise.”

But, following a lot of persuasion from family and friends, the five-time Narrabri Blues clubman of the year hesitantly agreed to chat about his time with the club.

Mowle is an avid Rabbitohs fan who signed up for the Narrabri Blues as a 21-year-old in 1982.

He played 10 enjoyable seasons of senior footy for the club, one of which was in first grade while the rest were in reserve grade.

His final match in a Narrabri Blues jersey was at Collins Park in the 1991 reserve grade preliminary final.

While his team won that day against the Gunnedah Bulldogs to advance to the grand final where it met West Tamworth, he had to watch the Blues lose in the big dance from the sideline after his jaw was broken as a result of a punch thrown by a Gunnedah player during what would be his farewell game.

He remained a part of the club as a committee member for five more years before moving on when his eldest son Kaleb was born.

Sixteen years later, he would rejoin the club when Kaleb played his first year in the senior grades.

Since then, Pat has been known by the Narrabri rugby league community as both a hard-working and dedicated committee member and club trainer.

He told The Courier that he had enjoyed his time at the Narrabri Blues.

“I came back about 10 years ago for Kaleb’s first year, so I would’ve been with the club for about 25 years all up,” Pat said.

“I’d really love to keep doing it, but it’s time to stop. I’m 60-years-old, and I told the wife I was going to give it up this year, and I have.

“It was a really special year this one (being the 100th year of rugby league in Narrabri) and it would’ve been even more special if we’d have got to the grand final, which I believe we would have won.

“It was an amazing year. We had a really good first grade side, and Jake (captain-coach Jake Rumsby) did a great job to get them where he did.

“They had a lot of injuries, but to still be minor premiers is quite a massive achievement.

“Again, we should have gone one step more, but COVID got in the road. That nearly made me change my mind actually, but I thought about it, and I said I was going to stop and I’m a man of my word so I pulled up.

“I’d still love to keep training with them, though, so we’ll see how that goes.

“I’ll be definitely coming down and watching a few games too.”

The hard-working club trainer has been recognised for his ongoing efforts across the years by the club. He received the Narrabri Blues’ greatest annual off-field honour on five occasions when he was named the clubman of the year in 2013, each year from 2015 to 2017, and then again in 2021.

He said that while it was an awesome feeling each time, and it was nice to be voted by his peers for such a special award, winning awards like that one was never why he gave all that he did.

He always did it for the club and the game, for the players, the fans, and the sponsors, and for his sons Kaleb and Jordyn.

One thing that Mowle has always had was the respect of the playing group, and why wouldn’t he? He has always led by example.

When senior player Hayden Bell ran a pre-season boot camp session back in March, a small group of 14 put themselves through the pain to help the club put itself in the best position possible for when the 2021 season finally rolled around.

Of course, one of those 14 was the then-59-year-old Mowle who pushed himself all the way to the end, both for his own benefit but also to help raise the bar and set an example for the next generation of players coming through at the club.

Actions like that, combined with his kindness, his sense of humour and his willingness to chat to anyone and everyone at the club about all things footy and life, are what shaped him as the ultimate clubman who will now be significantly missed as he moves on.

Mowle said that he enjoyed getting involved with the players and that the role of club trainer suited him perfectly.

“I really like mixing with all the players too.

“I’ve been doing all four grades for about six or seven years now, maybe. It’s just something I really like to do.

“It’s good camaraderie and I love to have a beer with the guys after each game.

“The blokes I’ve run the water with and against have been great too. I’ve got on a first-name basis with a heap of them.

“You get to meet a lot of people and even players, it’s great.

“I’ve spent a lot of time on this oval, which I’ve loved, but sometimes it’s just time to move on, and I’m sure someone will step up and do it from next year.

“There are a few young blokes there who can help out.”

While there was never any doubt about the legacy that Mowle would leave behind once he eventually hung up the boots, the Blues made it official in 2017 when he was made a life member.

“That’s one of the greatest achievements of my whole life, to be honest,” Mowle said.

“That was really special.

“Like I said about the other awards (clubman of the year), I don’t do what I’ve done to receive those kinds of things.

“But to be made a life member of the Blues was very special.”