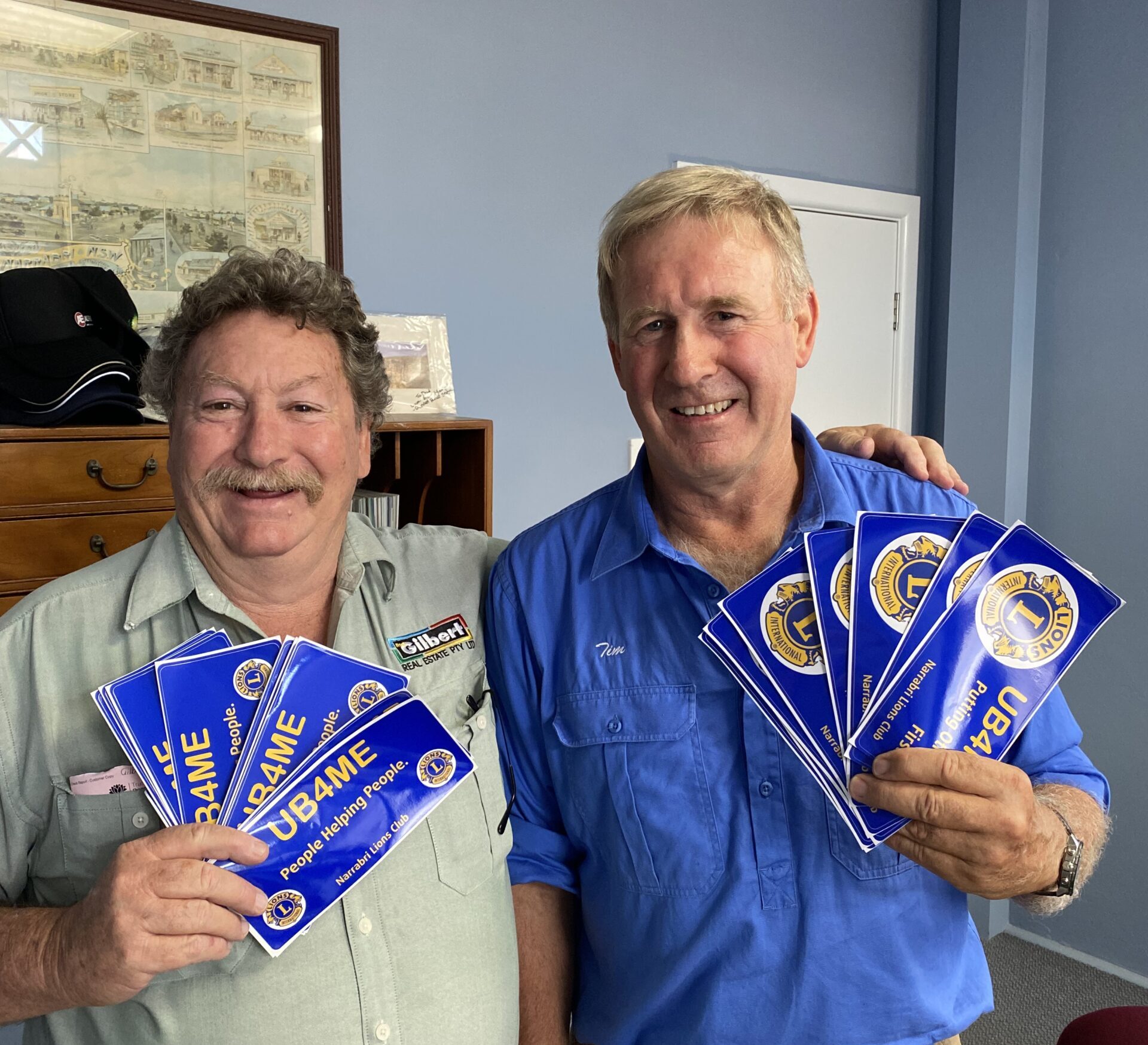 Narrabri Lions Club members Rob Gilbert and Tim Tapscott, and their fellow Lions are encouraging people to ‘slow down and put others ahead of yourself’ with the new campaign ‘UB4ME - ‘you before me’. It’s a special Lions community project to kick-start 2022.

Since 1964, Narrabri Lions Club members have proudly served our community in a variety of ways, but in 2022 they want to ramp up their contribution, try something a little different and spread a little more kindness.

The club is kick-starting the year with a new project named ‘UB4ME’, and its aim is to enhance “common community values” within Narrabri and surrounding areas by encouraging people to “put others before yourself”.

“We just want people to slow down a little bit and take the time to think about others,” said Lions Club member Tim Tapscott.

“It always feels better to give rather than receive.”

“It was actually Wayne Dornbush, who I work with, who came up with the idea after noticing people were becoming a bit more stressed and impatient,” said Lions Club member Mr Tapscott.

“We don’t want to turn into Sydney, we want people to take the time to care about others – it’s about having common manners and common courtesy.

“There are a lot of good people out there.”

And the Lions Club is hoping to inspire a few more with its latest campaign.

Traditionally, the Narrabri Lions Club is well-known for running community barbecues, building projects such as the lawn cemetery, or providing monetary or labour assistance to groups such as Meals on Wheels and the Narrabri Scouts.

However, at a recent meeting, the club chose to approve and commit their time to an alternative endeavour: the UB4ME project.

The project is still consistent with the club’s motto ‘We serve’ and its mission to make our towns ‘a better place to live and play’.

Whether the source of the problem is the grind and challenges of daily life, from drought to COVID and floods, or a function of the new way we communicate through smartphones instead of talking face-to-face – the club hopes the ‘UB4ME’ project is just the antidote the community needs right now.

Narrabri is a progressive and innovative town, but Mr Tapscott believes good old-fashioned manners and kind-hearted people are two of the characteristics that have always made the region such a wonderful place to live. And it’s not something we ever want to lose.

“It’s the people who make this community so great – it’s not about money, it’s about people.”

The Lions Club will have the catchy phrase ‘UB4ME’ printed on bumper stickers for cars, stickers for fridges and customer contact points to remind people to consider others before themselves.

“Even if it’s just saying ‘av-a-good-day to someone who is clearly not.

“If people do one good turn a day for somebody else, it does make the world go around a bit easier for everybody.”

The Lions Club said the campaign was not a fundraiser, and importantly it doesn’t cost anything to improve somebody else’s day.

“It’s about improving our community and the way it works.