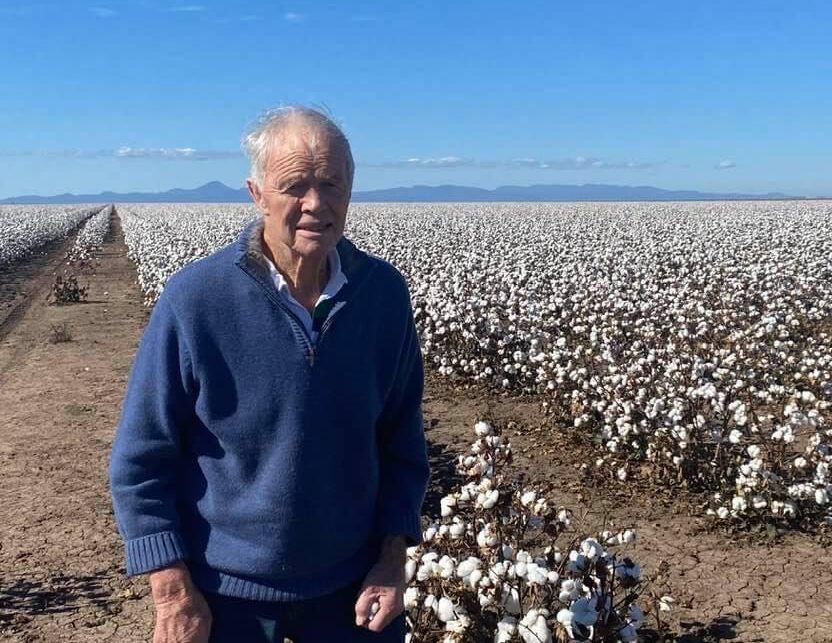 The late Robin Gourley who made the selfless decision to donate his brain to medical research. Mr Gourley died in July 2021.

There is an important area of dementia research of which some of us may be unaware.

The donation of a patient’s brain immediately after dying can herald ground-breaking and conclusive results.

The study of the human brain in science laboratories across Australia allows scientific researchers to better understand causes of dementia, leading the way to the development and improvement of future treatments.

The decision to donate your brain, or that of a loved one, is a very personal matter, and local farmer and Rugby League legend Robin Gourley made this extremely selfless gesture at the time of his passing in July 2021 with the blessing of his family.

The decision has opened up a tidal wave of support and awareness among friends and associates throughout the district.

With Tim running 100 kilometres and Freddy 25km, the family had no idea they would eventually raise funds amounting to $19,441, hugely exceeding their goal of $5000.

In addition to this, daughter Jenny Dean expressed the immense appreciation felt by her mother Nerida and the family towards the Narrabri district for rallying around the cause for dementia research.

“The Narrabri community was amazing. We received donations of $2350 from the Narrabri Rotary Club, $500 from the Parkinson’s Support Group and $170 from the Old Blues Men of League group. We are so grateful for their support”.

Narrabri Rotary Club president Darrell Tiemens spoke on behalf of the club and paid tribute to Robin’s dedication to the community throughout his life.

“Robin was an active Rotarian for many years, serving as president of the club in 1994-95,” said Darrell.

“His generous spirit is illustrated by this inspirational donation to dementia research,” he said.

“It was gratifying for our club to donate funds and take this opportunity to support the cause. Robin was a much loved and respected man in the Narrabri community”.

A person and their family collaborating on this decision to donate a sufferer’s brain for medical research following their death is a massive contribution to our understanding of different forms of dementia.

Due to these donations, many advances have been made in research over the past few decades.

With still no cure for dementia, modern brain imaging techniques, blood tests and genetic markers are all helping to improve the characterisation of brain diseases, but without understanding the changes that occur in the brain, the impact of these advances can be limited.

The brain is a very complex structure. To develop more effective treatments for various dementias, continuing studies are needed to identify specific cellular changes occurring in the brain of people with dementia compared with healthy subjects.

Consequently, donations are not confined to dementia patients alone, with a healthy brain donation being just as valuable to research.

Healthy brain tissue can also be used to study the ageing process of the human brain which is known as ‘control’ tissue.

People unaffected by brain and mind malfunctions are encouraged to consider registering as donors.

It is widely known that the impact of participating in contact sports is an additional cause for concern.

New research shows that a single head injury can lead to dementia later in life.

This risk further increases upon the number of head injuries sustained by an individual.

Consequently, nowadays players are heavily monitored once a head injury has occurred, and sporting organisations need to continually review their policies for best practice concussion diagnosis and management.

However, Mr Gourley’s results showed that whilst there was a definite deterioration of the brain due to head knocks (brain trauma), there were also indications of the presence of Alzheimer’s, and the results remain inconclusive in terms of how much each circumstance contributed to Mr Gourley’s condition.

Jenny spoke on behalf of the family which is immensely gratified by Robin’s brave decision.

“As a family we are so proud of what Dad achieved throughout his life, contributing to the community as well as building a successful farming business.

“He managed to do so much, without asking for anything in return,” Jenny said.

“He was an important role model for all of us, including his grandchildren.

“This final decision of Dad’s to donate his brain to research just completes the picture of the wonderful man he was – we could not be prouder of him”.