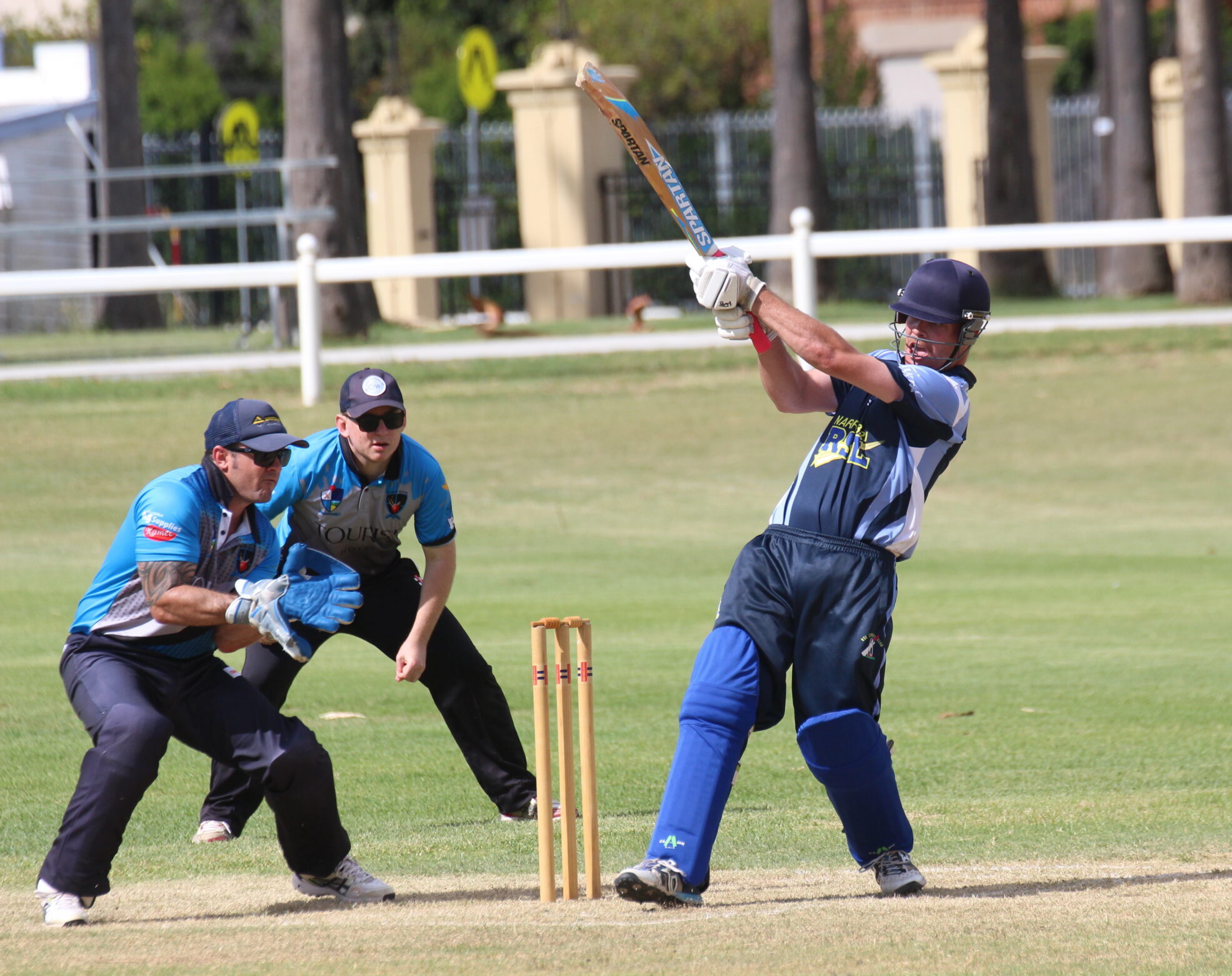 Narrabri RSL Cricket Club’s Cooper Brayshaw smashes a four during his side’s 77-run victory at Collins Park on Saturday as Tourist Hotel players Lachlan Woolford and Mitchell Foster watch on. The other match, scheduled to be played between Western Razorbacks and Tatts at Hogan Oval, did not go ahead after the Razorbacks forfeited the contest.

Narrabri RSL Cricket Club’s first XI scored a dominant 77-run victory against Tourist Hotel at Collins Park on Saturday to get its first top grade one day comp premiership defence in eight seasons off to a winning start.

RSL’s skipper Jarrett Tough won the toss and elected to bat in the day/night match, which began at 3pm, and was pleased with what he saw from start to finish with the exception of some slight signs of rust in the field early in the game’s second innings.

RSL batted out its 45 overs to reach 9-172. The fixture eventually wrapped up under lights just before 9pm after RSL bowled out Tourist Hotel for 95 runs in the 37th over of the second innings.

Tough told The Courier that he was happy to finally get back on the field following eight washed out matches earlier in the 2021-22 campaign and added that he was impressed with his side in its first outing.

He was also full of praise for RSL youngster Bernard O’Connor who starred for the defending champs in just his third match in the NDCA first grade competition.

O’Connor opened the batting for the first time in the top grade on Saturday and spent almost the entire innings at the crease before being dismissed for a game-best 56 in the 42nd over.

The 16-year-old found the boundary just two times in that innings, as he produced a patient and classy knock.

He then backed that up to claim two catches and a run out in the field as his side defended its total.

O’Connor combined for a 38-run first-wicket partnership with Tim Shields (25) to get RSL on the front foot early before his opening batting partner was caught behind by wicketkeeper Lachlan Woolford in the Jordy Mowle-bowled eighth over.

Mowle’s opening bowling partner Jye Manton then claimed the second wicket of the innings in the 12th over when Woolford held onto another catch to dismiss Zaac Brayshaw (1).

That made the score 2-47 and saw Cooper Brayshaw join O’Connor in the middle. The duo spent close to 20 overs together at the crease as they produced a game-best partnership which added 61 runs to RSL’s total.

Brayshaw (34) was eventually run out by Nick Tomlinson in the 32nd over. He attempted to steal a quick single but was denied by a brilliant pick up and throw by Tourist Hotel’s mid-on.

That made the score 3-109, which became 4-112 the following over when Cody Kember was caught behind after charging a flighted Sudi Perera delivery.

Brayshaw lost O’Connor (56) and Tough (3) during his time in the middle before he was the last wicket to fall, bowled by Mowle for 22 in the last over of the innings.

Woolford was exceptional behind the stumps for the fielding side as the wicketkeeper claimed four dismissals and did not concede any byes.

The chasing side’s innings got off to a slow start but, importantly, it was a wicketless one.

Tourist Hotel entered the 15-over drinks break on 0-41, having scored at less than three an over, but openers Nick Tomlinson and Hamish Duncan were still at the crease and looked solid during the opening session.

The floodgates opened in the second session as RSL claimed seven wickets in 14.2 overs to put the chasing side on the ropes.

After a frustrating start for his side, Cody Kember destroyed the Tourist Hotel top order. He got the ball rolling in the 17th over when he bowled Duncan (10) before claiming two more scalps in the 19th when he bowled Tomlinson for a team-best 27 before trapping Mitchell Foster in front for a duck.

That made the score 3-47, which became 4-52 when another wicket fell in the Kember-bowled 21st over. However, that came via an O’Connor runout which saw Matt Conroy (0) sent packing.

Kember took the ball for his ninth and final over in the 25th of the innings and delivered another wicket for his side when he trapped Woolford (9) in front to make the score 5-64.

After RSL’s quicks did the early damage, Tough turned to slow bowling to bring the game home. He and Brayshaw removed Perera (8) and Mowle (7) to make the score 7-77 after 29.2 overs when the second drinks break was taken.

Tourist Hotel skipper Luke Meppem and fellow experienced batsman Tim Hayne spent almost seven overs at the crease together after drinks before their 15-run partnership was broken by a bullet throw from mid-off fielder Trindall, which ran out Hayne (7) and made the score 8-92 in the 37th over.

Tough then dismissed Page and Callum Mallows for ducks later that over to bring the innings to a close.

The skipper finished with 3-3 from his two overs after Kember took a game-best 4-20 from nine overs. Jake Brayshaw (1-26 from nine overs) was the only other bowler to take a wicket, and while opening bowler Nathan Trindall went wicketless, his 0-9 from seven overs helped the side create crucial early pressure.

RSL and Tourist Hotel now turn their attention to their respective round four matches against two teams that are yet to play more than an hour of cricket this season after the Western Razorbacks forfeited their round three match against Tatts on Saturday.

RSL will challenge the Razorbacks at Collins Park, the same venue where the two sides met on November 20 last year when 60 minutes of play went ahead before the match was washed out and declared a draw, while Tourist Hotel will meet Tatts at Hogan Oval.