Kangaroos take down the Blues at Jubilee Oval in season opener 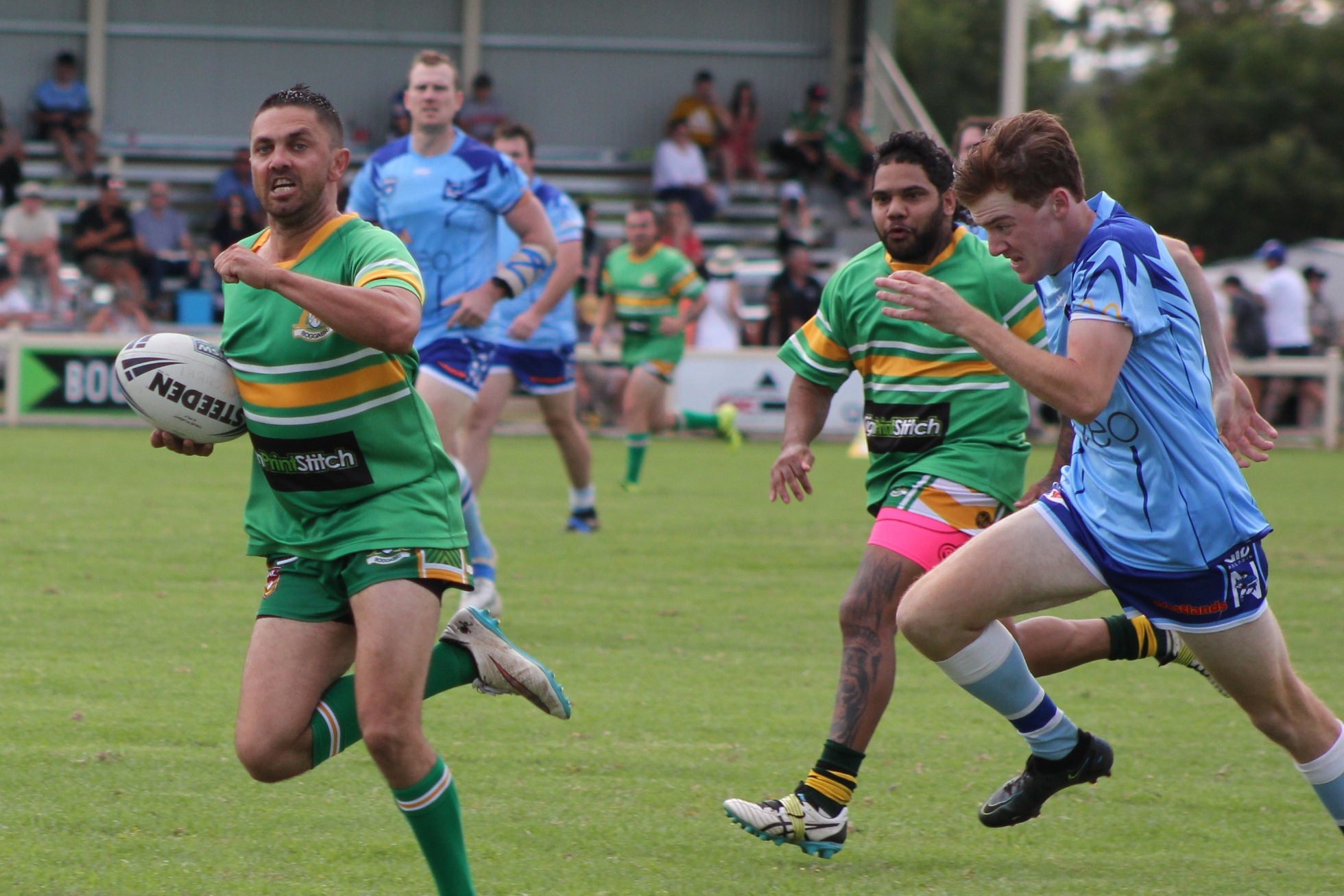 Boggabri Kangaroos halfback Josh Trindall races away for his side’s first try of the 2022 Group 4 Rugby League season in a 40-22 victory against the Narrabri Blues at Jubilee Oval on Saturday. Chasing (right) are Boggabri’s Isaiah Adams and Narrabri’s Harry Pattison. Photo: Tracey Tomlinson

Group 4 Rugby League’s 2022 season began with a bang at the weekend with four entertaining, high-scoring round one first grade contests.

There were 67 points scored on average in the four fixtures as the eight teams that were in action combined for 268 points.

Sixty-two of those were scored at Jubilee Oval as Boggabri and District Rugby League Football Club claimed its first win of the year in dominant fashion.

The Kangaroos outscored Narrabri Blues 40-22 to get their season off to a flying start, much to the delight of coach Shane Rampling.

“Any coach going into a new season would like to claim the two points to get the season off the ground,” he said.

“For me personally, though, I was really encouraged with the way we played, especially in the first half.

“We minimised our mistakes and we played to our game plan. Everyone played for each other.

“We were energetic and showed a lot of enthusiasm out there, and we really rifled Narrabri early on, which showed in the scoreline at half-time, 30-4.

“In the second half, we dropped off the intensity and we made a couple of silly mistakes and gave a few penalties away, which allowed Narrabri to get back in the game.

“They are such a good side, and if you give them opportunities they will take them, and they did.

“They put us under pressure, but we steadied the ship with about 20 to go, and we just got back to what we were doing well.

“Then we scored two late tries to put them away.”

Around the grounds, the Dungowan Cowboys, Gunnedah Bulldogs and North Tamworth Bears also kicked off their 2022 campaigns in style in round one with dominant victories.

On Saturday, the Cowboys downed the Kootingal-Moonbi Roosters 52-22 away from home while the Bulldogs scored a 48-16 home ground victory against Werris Creek.

The Bears then beat Manilla Tigers 54-14 the following day on home soil.

The Moree Boars sat out after they were dealt the round one bye.

At Jubilee Oval on Saturday, Josh Trindall made a successful return for the Kangaroos following an injury-plagued 2021 campaign.

He scored the first try of the contest to give the Kangaroos an early lead and controlled the match with his kicking game as Boggabri earned its first win at home against Narrabri since June 29 in 2019.

Trindall’s halves partner Kaylyn Murray picked up right where he left off last season with yet another eye-catching performance in round one.

The five-eighth scored two tries in the 18-point victory, while teammates Rhyce Kliendienst, Bailey Lennox, Nic Millar and Jack Gillham combined for the other four tries.

Former Narrabri Blues gun Rob Doolan was outstanding at centre for Boggabri. He added 12 points off the boot after slotting six goals and also picked up the three Group 4 best and fairest points.

The Blues only managed one try in the first half through winger Lachlan Trindall, but they came out firing in the second stanza as Jock Small, Sam Sadler and Daniel Jobson all crossed the stripe and Todd Nichols slotted all three conversions.

That reduced Narrabri’s deficit to just eight points on the hour-mark after it trailed by 26 at the break.

However, the Kangaroos regrouped and were able to take advantage of errors that crept back into Narrabri’s game in the final 20 minutes of the contest. They piled on two late tries to secure an 18-point victory and earn the two competition points.

Both clubs were victorious at Jubilee Oval prior to the first grade game on Saturday.

Boggabri kick-started the day with a 28-10 ladies’ league tag win against the Narrabri Bluebirds before the Blues edged out the Kangaroos 20-16 in the reserve grade match.

The Group 4 Rugby League season will break this weekend for Easter and will return with round two matches on Saturday and Sunday, April 23 and 24.

The Boggabri Kangaroos will run out in front of a home crowd again on the Saturday when they take on the Dungowan Cowboys in first grade, reserve grade and ladies’ league tag at Jubilee Oval.

The Narrabri Blues will play on home soil for the first time in 2022 the following day when they welcome the Gunnedah Bulldogs to Collins Park in first grade, reserve grade, under-18s and ladies’ league tag.