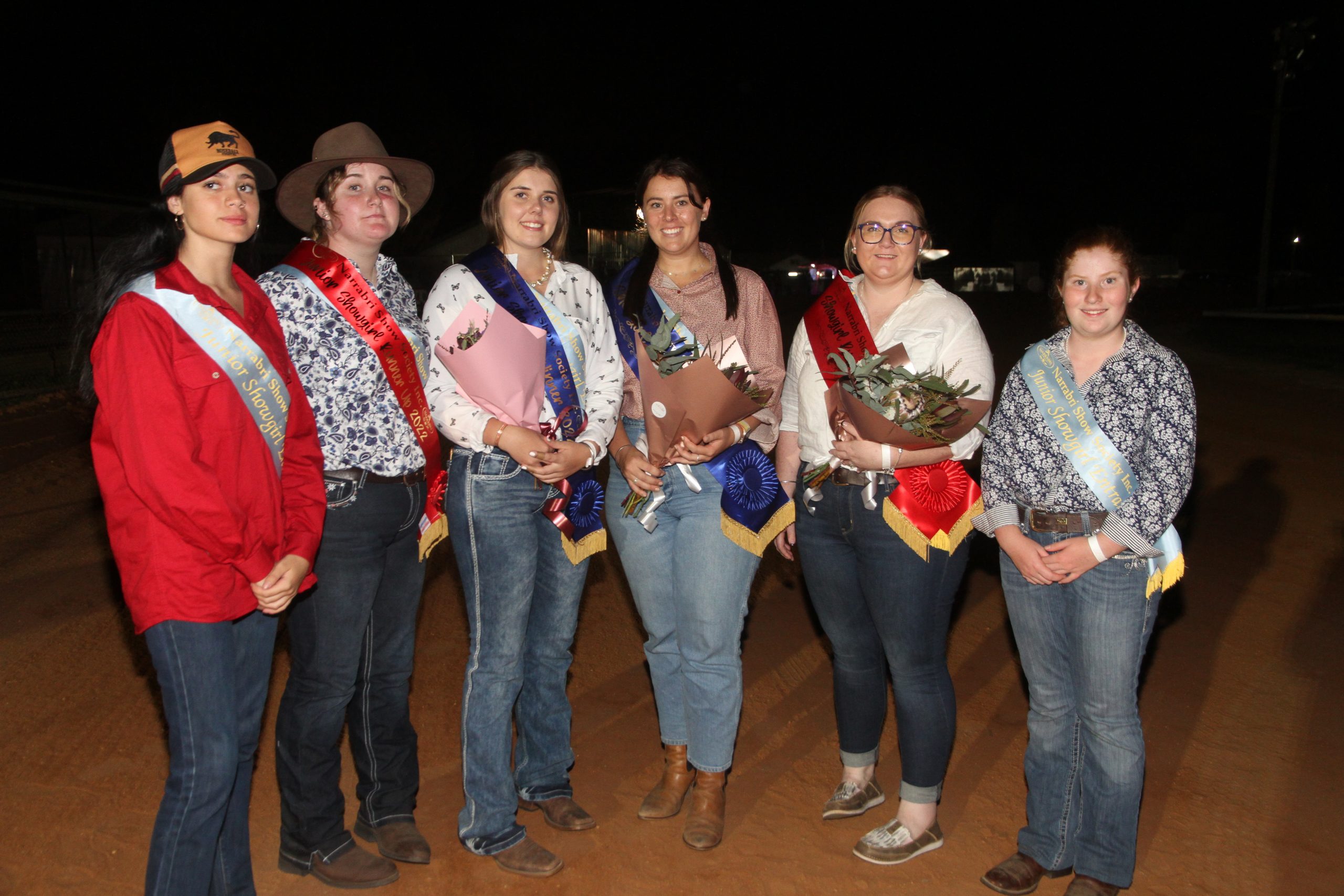 Anna-Rose Smith, Grace Hardy, Denae Seymour, Samantha Coppin, Phoebe Schwager and Jessie Simpson were the entrants in this year’s Showgirl competition. Samantha and Phoebe were the winner and runner-up in the Senior section while Denae and Grace were the winner and runner-up in the Junior section. The winners were announced on stage by guest-of-honour, Shanna Whan, of Maules Creek, who is the 2022 Australian Local Hero of the Year.

The 2022 Senior and Junior Narrabri Showgirl winners were announced at the official opening of the show on Friday night.

A large crowd gathered around the rodeo ring for the announcement by guest-of-honour Shanna Whan who officially opened the event.

The crowd cheered the entrants as they gathered on stage with dignitaries and show officials.

The entrants showed poise and maturity and their community spirit was evident from their speeches throughout the competition.

Show secretary and Showgirl head steward Bec Cope was thanked for her efforts in organising the competition.

Ms Cope praised the entrants who were kept busy across the show weekend.

The entrants also rolled up their sleeves and got to work in various parts of the show.

Last year’s Showgirl winner, Gemma Ferguson, was also on hand to assist with various components of the show.

The announcement of the Showgirl winners on Friday night was a moment of pride for Narrabri High School.

Senior winner, Samantha, is an English teacher at the school while the Junior winner, Denae, is a Year 11 student.

At last Wednesday night’s cocktail evening function, Samantha told the gathering of her love for English during school as well as an interest in poetry which developed over time.

In the Junior competition, Denae was asked about her attraction to agriculture.

She told the crowd she enjoyed being outdoors and had a love for farming as well as caring for animals.

Runner-up, fellow Narrabri High student Grace Hardy was asked about her experience in hospitality and her dream of owning her own coffee shop.

She said she wanted to learn about food technology as well as bush tucker which she would like to use in her cafe.

Junior entrant Jessie Simpson told the crowd of her passion for community, and explained her involvements with the Narrabri Amateur Fishing Club as well as various involvements in Eulah Creek.

Anna-Rose Smith was asked about her intention to study psychology at university.

At the cocktail function, Ms Cope interviewed the entrants individually on stage while the judges watched on.

The judges previously conducted one-on-one interviews with the entrants at the Tourist Hotel.

This component of the competition forms the largest portion of the scoring.

The on-stage interviews at the cocktail function, however, serves as good training for public speaking.