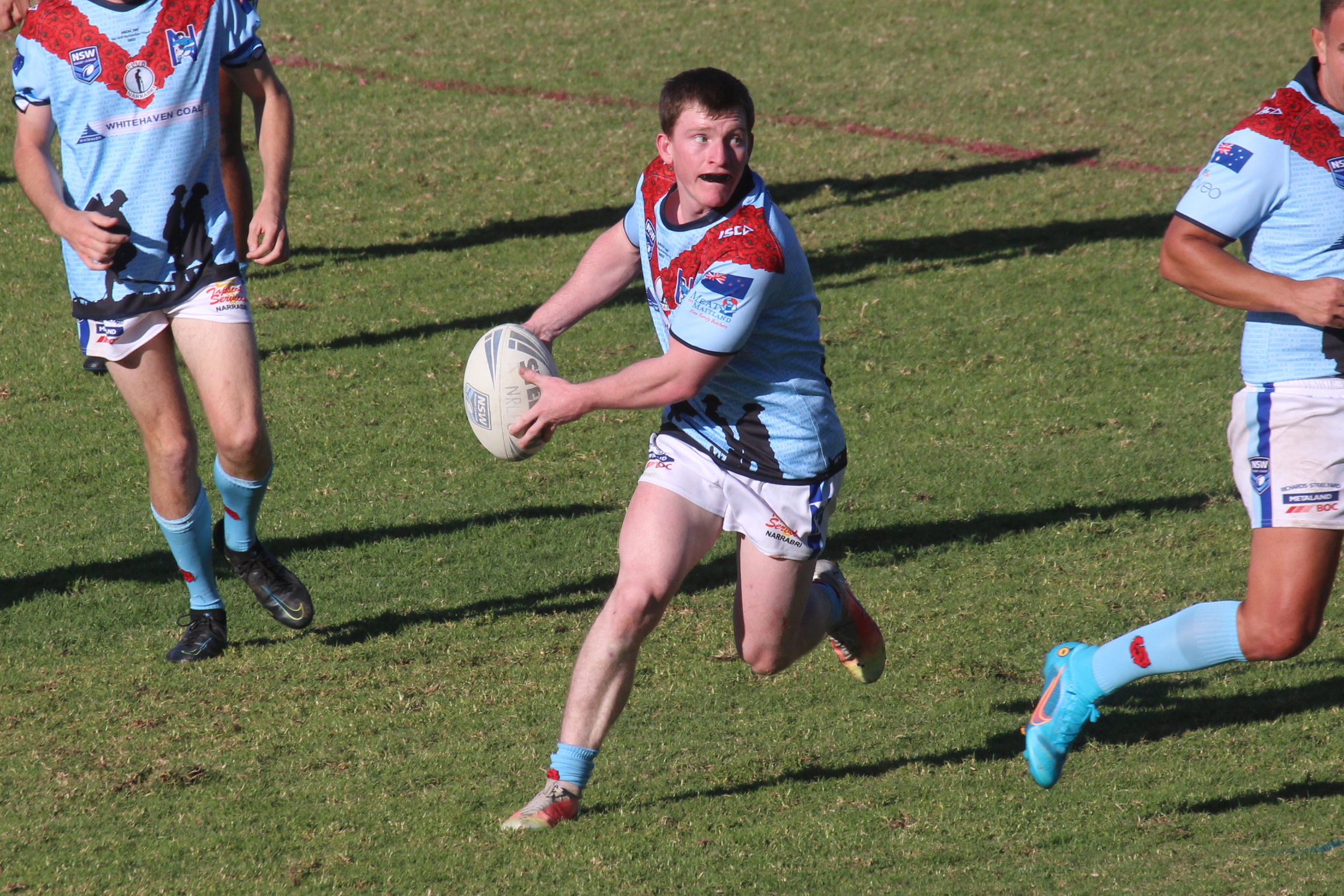 Narrabri Blues fullback Damon Gleeson set up a try and scored one himself on Sunday at Collins Park against Moree Boars.

Narrabri Blues and Moree Boars went head-to-head at Collins Park in the fourth round of the Group 4 Rugby League campaign on Sunday, where the two first grade heavyweights put on an entertaining spectacle.

It was Moree that claimed the two competition points when 80 minutes of tough, end-to-end footy came to a conclusion as it edged out the Blues 26-24.

Kicking three goals to the Blues’ two eventually got the Boars over the line after both sides crossed for five tries each in their first meeting of the year.

Damon Gleeson, Lachlan Trindall, Daniel Howe, Sam Sadler and Jake Rumsby all crossed for the home side, and Todd Nichols kicked both of the team’s two successful conversions.

The in-form half-back Nichols also polled Group 4 best and fairest points for a fourth consecutive match. While Moree back-rower Joe Wade picked up the three points for an exceptional performance, Nichols claimed two as he remained on top of the first grade tally with 10 of a possible 12 points.

The Blues played some quality footy during Sunday’s match but made several mistakes that allowed Moree to either stay in the game or find the tryline.

The 10 minutes before half-time was a game-changer for the home side.

Moree was a man down after Holt Cubis was sin-binned, however, the Blues were penalised for an incorrect play-the-ball almost immediately after Cubis sat down on the sideline, and they would not touch the ball again until the 37th minute when they won a penalty deep in their territory after surviving a Moree onslaught.

But the Blues’ kick for touch did not find the sideline, and Moree made them pay with a try right on half-time, which made the score 16-10.

That came back to haunt the Blues after they fell two points short, despite outscoring the Boars 14 points to 10 in the second stanza.

“We made a few blues at critical times,” Rumsby told Group 4 Media after the game.

“Would have been a real good game to watch because it was a real good, quick game to play in.

“Moree were the better side today and deserved their win.”

Gun five-eighth Adrian Smith went over for two tries for the Boars and also kicked two conversions, while teammate Michael Watton registered one of each and Joe Wade and Jamie Sampson crossed for a try each.

Moree’s victory was one of three on the day after it won the ladies’ league tag match 44-0 to begin proceedings and then beat Narrabri 44-6 in reserve grade.

Moree was one of four visiting sides that was victorious in round four of the first grade competition across the weekend as the Boggabri Kangaroos, the Kootingal-Moonbi Roosters and the Dungowan Cowboys all earned two points on the road.

Boggabri took on Manilla Tigers at that same venue the following day and scored a 56-24 win, while the Cowboys took on Gunnedah Bulldogs at Kitchener Park on Sunday and won 32-18.

Werris Creek Magpies had the round four bye.

Those results saw Moree finish the round as the stand-alone leader on eight points.

Boggabri is third on six points and only trails the second-placed Bears by for and against difference. Kootingal, also on six points, rounds out the top four.

Narrabri dropped out of the top four and finished the round in sixth place on four points. It trails Dungowan and leads Werris Creek on for and against difference.

Gunnedah is ranked eighth on two points, while the last-placed Tigers are anchored at the foot of the table on no points.

Manilla will go in search of its first win of the season in round five on Sunday when it takes on the Blues at home.

The other three first grade contests will all be played on Saturday when Dungowan hosts North Tamworth, Werris Creek hosts Kootingal, and Gunnedah travels to Moree.

Boggabri has the bye in round five, meaning it will remain in third place unless the Roosters beat the Magpies by 51 points.