Narrabri FC bounces back with a big win against Moree 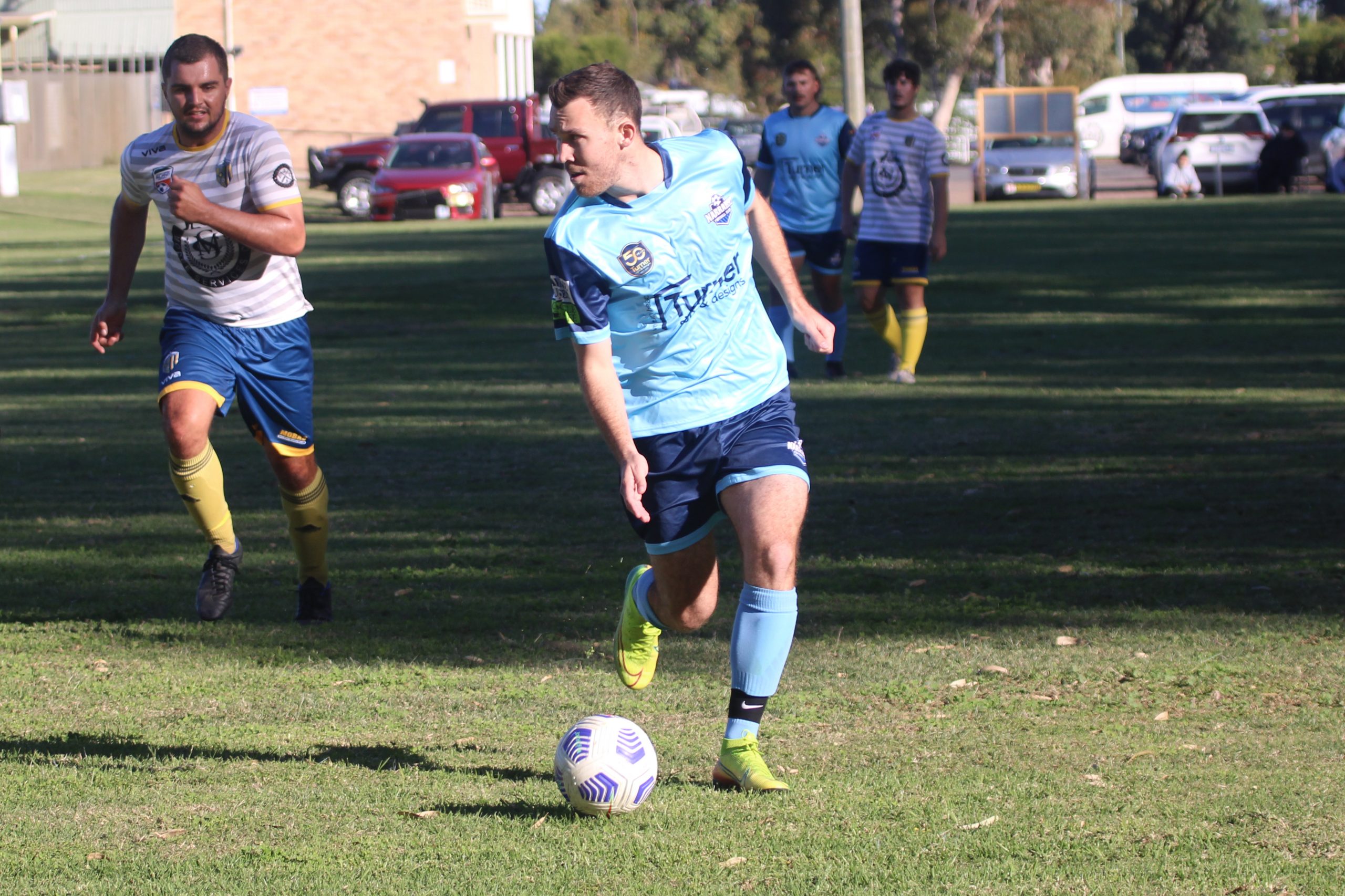 Narrabri FC first grade striker Jake Brayshaw in action in Moree, where he scored four goals in a 7-3 win against Moree Services FC in the second round of the 2022 Namoi Soccer League season on Saturday.

Narrabri FC returned to winning ways on Saturday as it prevailed 7-3 away from home against Moree Services FC in the second round of the Namoi Soccer League first grade campaign.

The visiting team converted a 3-1 half-time lead into the four-goal win to earn its first points of the year.

The 2020 champions went through the 2021 season undefeated as they scored 15 wins from as many games to claim the minor premiership, and they were determined to defend the premiership before COVID-19 ended the season prematurely.

Their impressive winning run came to an end last month when the side went down 3-1 in its season opener against Wee Waa United as it suffered its first Namoi Soccer League defeat since August 2020.

But Neil Brayshaw’s men responded the way that the coach expected them to on Saturday.

“I wasn’t too concerned after that Wee Waa loss because, as I said to the boys, they played reasonably good for about half an hour in that game,” he told The Courier.

“We really just went away from what was working.

“As I said to the boys, Moree is a new game and a new week, and I wanted them to concentrate on what we do best, which is our passing game, and they did that.

“It was almost the same start for us as the week before. Moree held us out well early, but we didn’t drop our structure this week. We kept playing, and we eventually chipped away and got three goals in the first half.

“We then had a couple of lapses in defence to concede, which was pretty much just a lack in communication more than anything.

“But I was happy with the way we finished and got the job done.”

Meanwhile, Inverell FC established itself as the early front runner in the second round of the 2022 campaign on Saturday when it became the only team to claim a maximum six points to start the season by scoring a 9-0 win on home soil against Narrabri Eleven FC.

The Elevens went into the half-time break trailing 7-0 in that game and showed impressive defensive resolve in the second stanza as they only let in two more goals against one of the two newest Namoi Soccer League clubs.

Last season’s second-placed side Wee Waa United hosted the other of the competition’s fellow newcomers, Gunnedah FC, at Cook Oval in the other round two match.

The two teams were forced to settle for a point each after contesting an entertaining 3-all draw.

They went into the half-time break locked at one apiece after Ray Nixon netted for the hosts and Gunnedah FC’s player-coach Andy Cygan scored for his side.

Alex Boulus fired Gunnedah to a 3-1 lead with a brace after half-time, but the home side equalised as Nixon completed a brace and player-coach David Avery netted his first goal of the campaign.

In Moree, Jake Brayshaw found the form that saw him claim last season’s golden boot with four goals in the win against Moree Services FC. He also provided two assists as he dominated the opposition in the front third.

The striker opened the scoring in the 22nd minute and then provided an assist for the second goal, which was scored by midfielder Tom Holland who found the top right corner with a powerful strike from just outside the 18-yard box.

Brayshaw netted again in the 33rd minute to make the score 3-0, but Moree hit back through Joe Coleman in the 37th as the visitors went into half-time with a 3-1 lead.

Narrabri FC came out firing in the second stanza and scored after just four minutes of play when Brayshaw completed his hat-trick.

Moree cut the visiting side’s lead to two in the 59th minute when Coleman found the back of the net again to make the score 4-2.

That became 4-3 in the 73rd minute when the ball deflected off Danny Laws and into his own net, but Narrabri FC hit back in the 74th when Vincent Labronde scored his first goal for the club to make the score 5-3.

Colby Williams netted his first goal of the season three minutes later as the visitors established another three-goal buffer, and Brayshaw added their seventh and final goal in the 89th minute.

The reserve grade games were won by the three home sides in round two. Inverell beat the Elevens 12-1, and in two closer games, Moree downed Narrabri FC 2-1 and Wee Waa edged out Gunnedah FC 2-1.

Noah Smith scored his second goal of the year for the Elevens in their loss in Inverell, and Andrea Brown netted her first senior goal in Narrabri FC’s loss in Moree.

At Cook Oval, Kallum Marchant scored Wee Waa’s first goal of the year and the home side went into the half-time break locked at 1-all against Moree.

Wee Waa player-coach Chris Johnson scored the only goal of the second half as the hosts claimed a 2-1 win.

The two Narrabri clubs will both return home this Saturday for their respective round three matches when they host the first of four double headers at Hogan Oval in 2022.

Narrabri FC will take on the in-form Inverell in the first two games of the day, and then Narrabri Eleven FC will meet Gunnedah FC.

Wee Waa United will also play at home for the second time at Cook Oval in as many weeks, where it will welcome Moree in both grades.