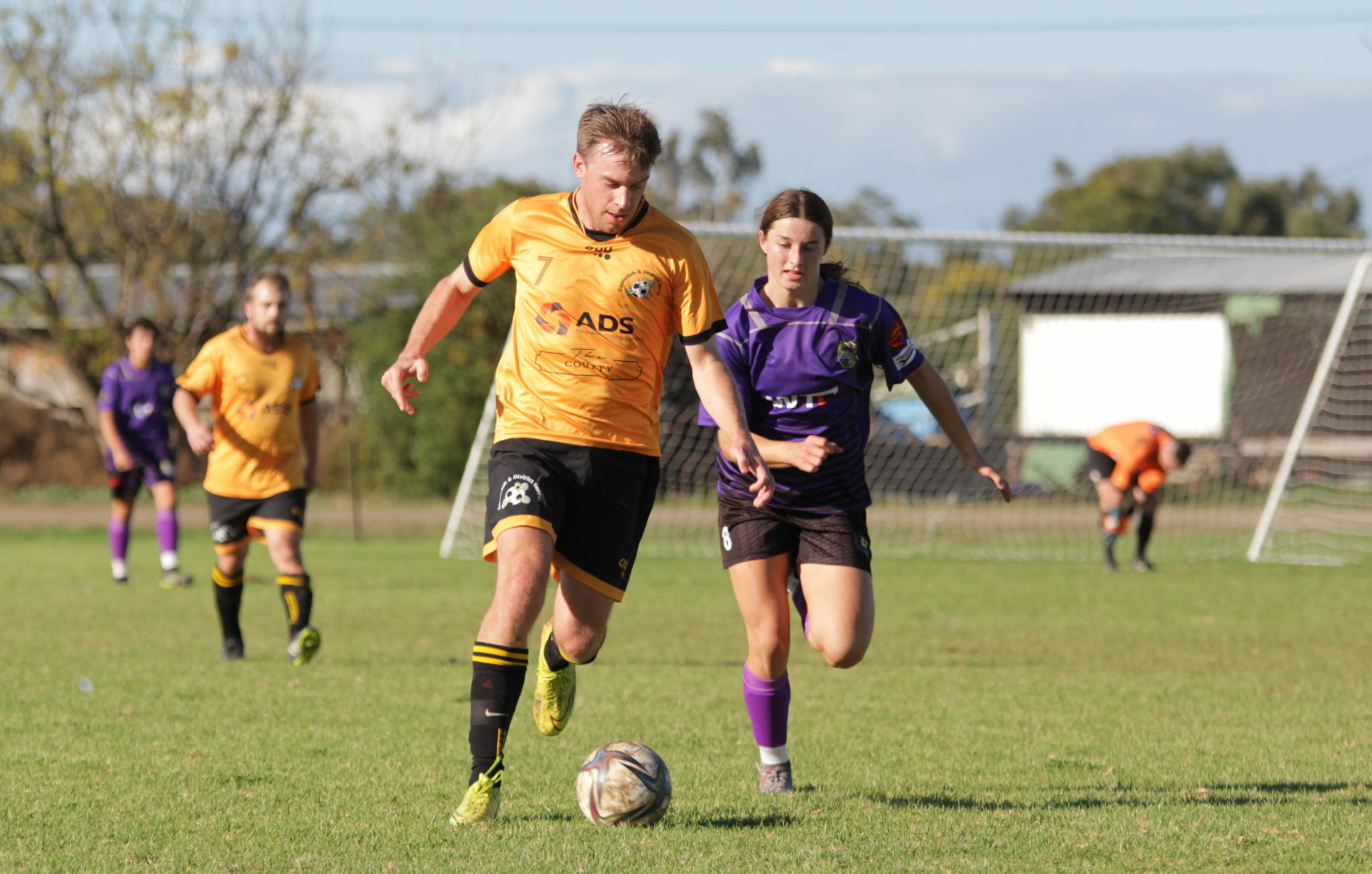 Gunnedah FC’s Matt Williams is chased down by Narrabri Eleven FC’s Holly Ford in their sides’ round three contest in Gunnedah on Saturday.

Namoi Soccer League’s 2022 season was affected by rain for the first time this season on Saturday when four of the six clubs were unable to play their respective round three matches.

Wee Waa United FC was scheduled to host Moree Services FC, but Cook Oval was closed due to the excessive amount of rain Wee Waa received late last week and the games were washed out and will now be rescheduled.

Narrabri FC’s games against Inverell were to be contested at Hogan Oval on Saturday, but those games were also washed out. Those fixtures will now be played at a later date.

Narrabri Eleven FC was scheduled to play against Gunnedah FC at home at Hogan Oval on Saturday following the completion of Narrabri FC’s two matches.

The two clubs agreed to play the matches in Gunnedah, where the field was still open and playable, to avoid having to play a catch-up game.

Gunnedah FC scored its first wins of the 2022 campaign in both grades as it defeated the Elevens 7-0 in reserve grade and 8-1 in first grade.

In the main game, the Elevens hit the lead early when Bailey Campbell netted his third goal of the season to make the score 1-0.

However, Gunnedah regrouped and went into half-time ahead 4-1.

The home side’s player-coach Andy Cygan scored two of those goals, and teammates Matt Williams and Casey Target also found the back of the net.

Cygan bagged two more goals in the second stanza, Williams added one to his tally, and Zac Crowhurst also got on the scoresheet for Gunnedah as their side ran away with a dominant 8-1 victory.

The in-form Cygan is now the Namoi Soccer League’s leading goal-scorer in first grade after hitting the back of the net six times in three games.

The Elevens will return home to Hogan Oval this Saturday when they challenge Wee Waa United in round four. The Narrabri side will be without Jakeb Nipperess and Noah Smith for that clash after both received red cards in Gunnedah.

The other round four matches will see Gunnedah FC host Narrabri FC at the Geoff Morgan Fields and Moree Services FC travel to take on Inverell FC.