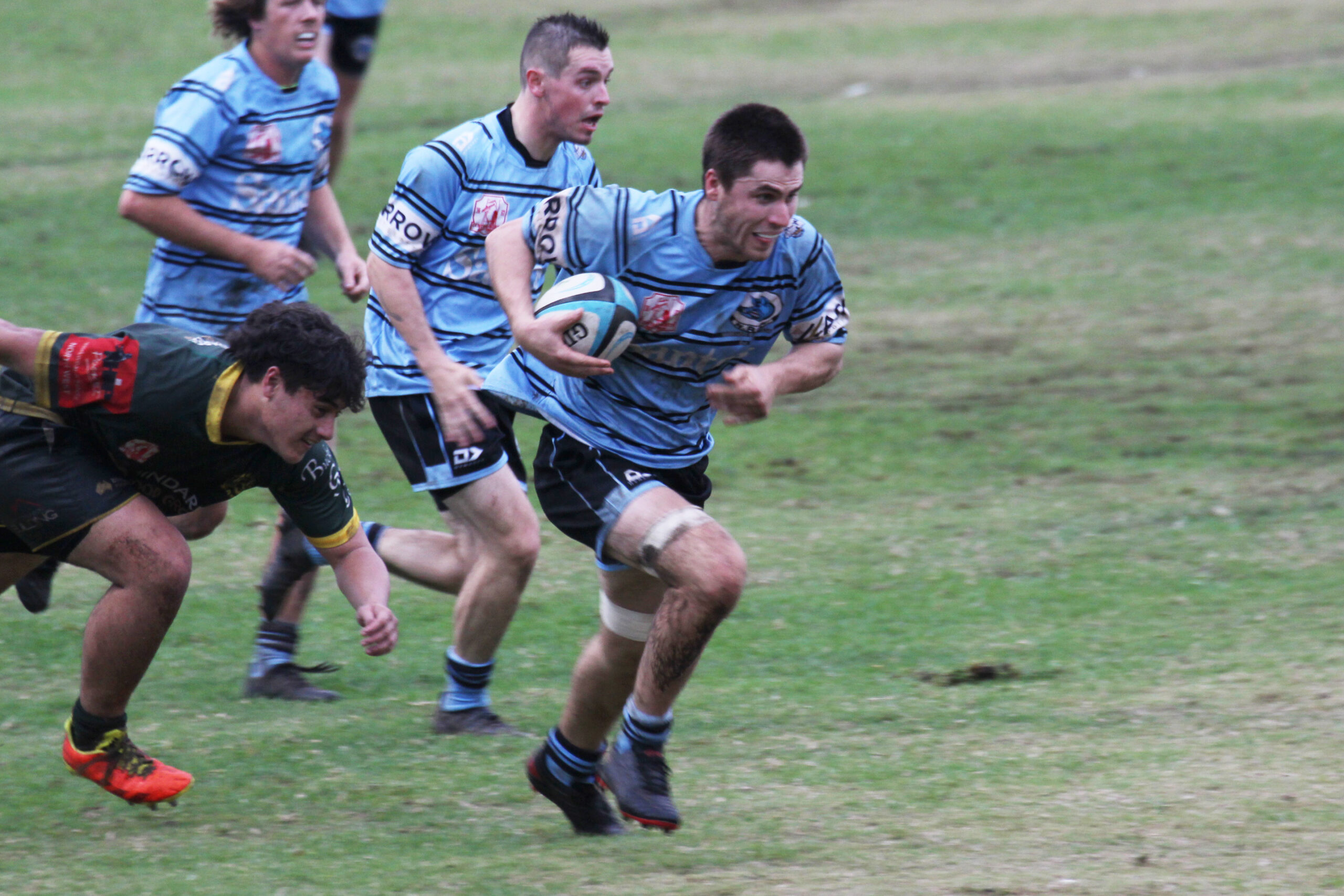 Narrabri Rugby Club gun Sam Knight charges upfield after powering past an Inverell defender in his side's 43-21 victory at Dangar Park on Saturday.

Narrabri Rugby Club’s first grade side continued its undefeated start to the Central North Rugby Union campaign on Saturday when it scored its fourth consecutive win to remain on top of the table.

In the fifth round of the season, the Blue Boars took on the Inverell Highlanders and converted a 19-7 half-time lead into a 43-21 victory in front of a home crowd at Dangar Park.

Narrabri was in control of the game from start to finish and never looked like losing at any stage in the contest.

A pleased Jake Packer gave his side’s performance a big tick of approval, with the Narrabri Rugby Club first grade coach telling The Courier that he was happy with his team’s drive to keep on winning.

“It’s always good to get that win and keep the ball rolling,” he said.

“I was very pleased (with the way the Blue Boars played).

“There were a few things we had to fix up from our first half that we did in the second half.

“In that second half, we didn’t always kick when we thought we had to kick.

“We looked to run and be positive getting out of our own end, and that caused a lot of trouble for Inverell because they weren’t expecting that.”

“It was really good to see that game awareness and the guys’ ability to fix things mid-game.

“In the second half, though, we did have a few lapses in concentration that allowed two tries in, but that was purely on us.”

The Blue Boars have been scoring from all areas of the park this season, and that continued on Saturday, with a try in the corner, two out of the back rucks, two forwards crashing over from close range and two other tries coming from the outside centre and five-eighth combining sharply to cut Inverell apart down the middle.

“We can score from anywhere at the moment, which is really good,” Packer said.

“You’re a dangerous side when you can score from anywhere, whether it’s out the back or through the forwards pick and driving.

“You’ve really got to have different dimensions to your game. Otherwise, it’s easy to defend.

“For us to be able to score tries from wherever is good.

“It’s showing the boys are confident and they are positive in the way they are attacking, and it’s only going to get better and better.

“We didn’t train on Thursday (due to the weather), and we’ve had guys away and guys sick.”

Packer labelled his players’ ability to adapt to challenging situations during Saturday’s game and their dominance in the ruck and at the breakdown as what impressed him most during the round five win.

The Blue Boars picked up not only their fourth consecutive win but also their fourth four-try bonus point of the year on Saturday.

That saw them finish the round in first place with a maximum 25 points after five rounds, during which they also had a bye.

The home side ran in seven tries at Dangar Park on Saturday to Inverell’s three and kicked four conversions to the Highlanders’ three.

Narrabri winger James Baker got the ball rolling with a sixth-minute try in the right corner before Tom Nolan added to the scoreline in the 17th.

The halfback capitalised on some tough runs made by his forwards with a diving try after scooping up the ball out of the ruck close to the line. Jacob Nichols converted that Nolan try to make the score 12-0, which then became 12-7 in the 23rd minute when the visitors scored a converted try.

Nichols then kicked the Blue Boars back into a 12-point lead when he converted a 27th-minute Will Turner try after the hooker charged through the Inverell defence close to the line.

That made the score 19-7, which was the way it remained at half-time.

The Narrabri men came out firing in the second stanza and extended their lead to 31-7 after just 13 minutes of second half action.

Nolan scored his second of the day in the 46th minute when he raced 40 metres after taking the ball out of the ruck and breaking the line.

Nichols converted the goal, and then Daniel Kahl went over for his third try of the season in the 56th minute to put Narrabri ahead by 24 points.

Both sides ran in two more tries after the hour-mark as the hosts ran away with a 43-21 win.

The Blue Boars’ final two tries were both scored by Will McDonnell and were superbly assisted by his fellow co-captain Nichols.

The Red Devils scored a 57-7 home ground win against Moree Bulls to finish the round with a maximum 25 competition points.

The Gunnedah men remained in the second spot on the table, with the Blue Boars on top due to them having earned four wins compared to the Red Devils’ three.

Gunnedah also held on to the 2022 Kookaburra Challenge Cup as a result of its win.

Pirates are third on 19 points after they earned their third win of the year when they scored a 59-5 away victory against Walcha.
Quirindi and Scone both had byes in round five.

There will be three games contested in round six this Saturday. Narrabri will travel to Tamworth to challenge the Pirates, the Red Devils will defend the Kookaburra Challenge Cup away from home against Inverell, and Quirindi will host Scone.

Moree and Walcha will both sit out with byes.

Packer said he was excited for the test of an away game against the Pirates.

“Pirates are Pirates,” he said.

“It’s always a tough game, no matter how good you’re going or how they’re going.

“Looking at how they’re playing in the lead-up, you don’t really take that into account.

“Their experience in big games – and Narrabri at Pirates is a big game – they seem to go to another level.

“I expect a hard-fought between the two teams.

“I know our boys are definitely up for it, especially our forwards on the back of how good our scrums have been.”