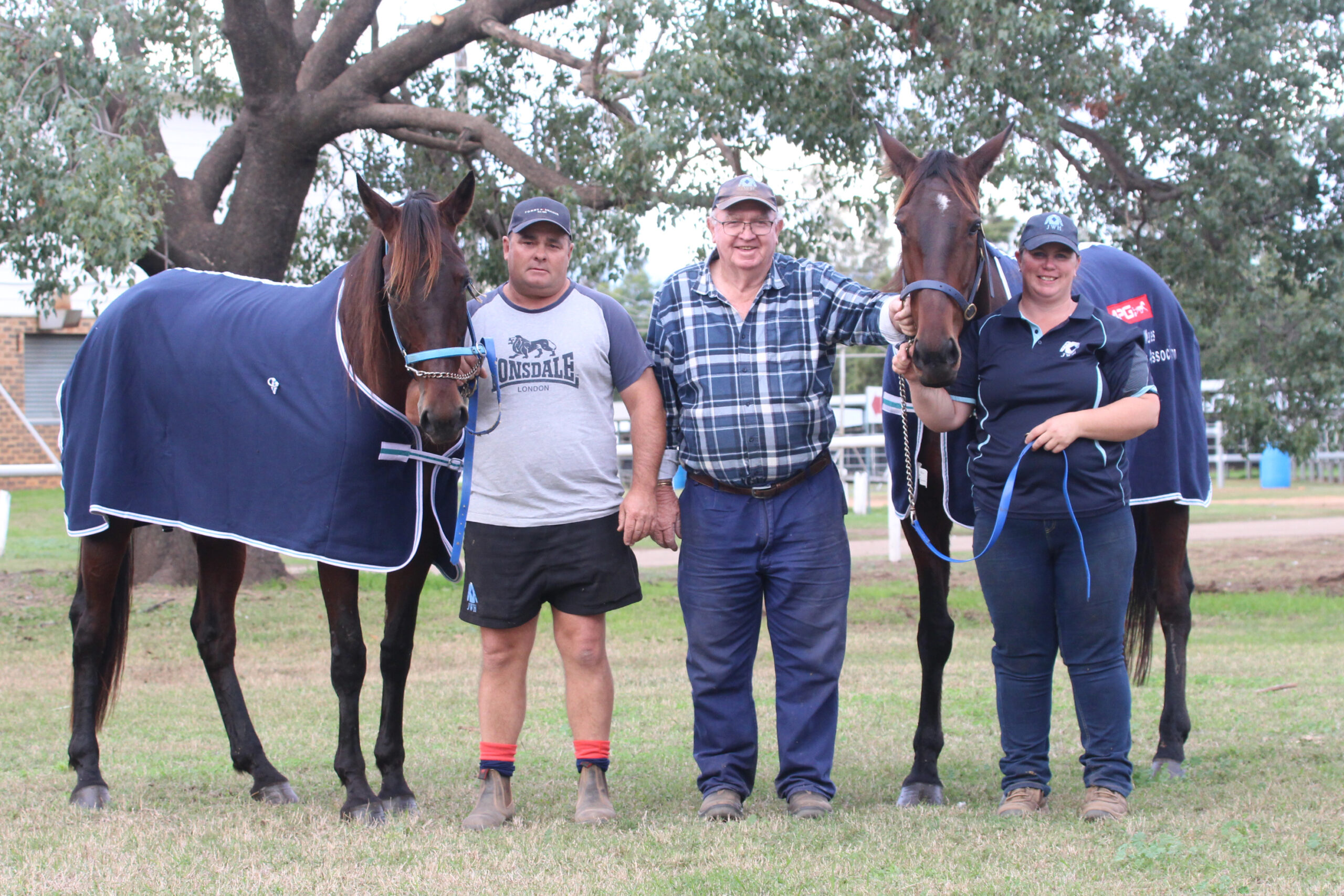 Jarred Hetherington trained pacers SomethingaboutLexy and Always Bopping raced to a quinella finish at the Tamworth Paceway on Wednesday in the 1609-metre TAB App Club Menangle Country Series Heat, with both qualifying for the May Series final to be held at Club Menangle on Saturday, June 4. The two pacers are pictured above flanking Hetherington, his father Wayne and JWH Racing stable hand Jess Freeman at Narrabri Showground today.

The 45-year-old trainer will travel to Sydney early next month, where two of his pacers will line up in the Club Menangle May Country Series final on Saturday, June 4, after the duo raced to a memorable quinella at the Tamworth Paceway on Wednesday.

That brought up win number 100 for the Narrabri man, who has enjoyed seven years in the sport.

That race was the eighth of the day and began at 4.52pm as nine pacers aged four-years-old and older and with a maximum National Rating of 52 lined up for a chance to qualify for the two elusive final spots in this month’s series final.

SomethingaboutLexy started that race from the seven barrier on the second row, behind pole position, and Always Bopping started on the front row next to pole position. They were driven by Newcastle reinsman Brad Elder and Tamworth reinsman Tom Ison, respectively.

Elder settled SomethingaboutLexy in behind the Anthony Missen-trained, Blake Hughes-driven favourite and pole position starter Rambunctious early in the race. They stayed in that position, running third to Rambunctious and Always Bopping for most of the race before they took off and charged between the two pacesetters with 450 metres left to run.

SomethingaboutLexy overtook her stablemate with ease at the three-quarter mark but trailed Rambunctious by three metres going into the final turn.

However, she and Elder entered the final straight in the lead and kicked away to charge home to a memorable 11-metre win.

Always Bopping also managed to hit the finish line before Rambunctious to place second as Hetherington was able to celebrate his 100th victory as a trainer with a quinella.

The Narrabri man told The Courier he was quite pleased with that result, as well as SomethingaboutLexy’s and Always Bopping’s runs.

“It was a good result,” Hetherington said.

“It was the feature race for the day, so it’s always good to win one of them and to run second too, we’re very lucky, and we take that in our stride.

“Always Bopping was a huge run. To do all the work and sit parked and still be there at the finish to run second was impressive.

“SomethingaboutLexy got the break and showed a really good turn of foot and pretty much won the race as she liked easing down on the line.

“She got fresh air and exploded.

“Barrier draws are crucial, and both horses were driven well, and it was nice to get the result.

“Brad (Elder) has driven 30 or 40 winners for me previously, but that’s the first horse he’s driven for me for two or three years now.

“He was calm. He has a good head on him, and he balances horses well.”

Among the field of nine in that race was fellow Hetherington-trained four-year-old mare Miss Maravu, which was driven by Anthony Varga.

Hetherington said he thought that Miss Maravu was the best chance of producing a win out of the trio.

“Miss Maravu is probably the better horse of the three, but she put paid to her chances by galloping early,” he said.

The win was SomethingaboutLexy’s fifth in 31 starts and her third since joining the Hetherington stable late last year.

It was actually her third win in 30 days after she raced to back-to-back victories on her home track at the Narrabri Showground last month at Narrabri Harness Racing Club’s two TAB meetings.

“Her first run was good for us, but her second run wasn’t all that good,” Hetherington said.

“We’ve played with her the whole time, and she hasn’t had a break or a spell.

“It took a long time to get her right. She’s not the healthiest of mares. So it’s a good feat in itself to get her back to the races and winning races.

“She has a lot of ability, but through sickness and illness, no one will ever see her full potential.

“Her owner’s a gentleman. He’s a lovely bloke from Forbes – Lex Crosby.

“We used to have her half brother here too, Lexycanwait.

“He was a tremendous horse for us and still holds the track record at Tamworth.

“It’s a very nice bloodline, and we are really happy with her.”

As far as the Narrabri trainer’s 100th win is concerned, Hetherington said he was more focused on the next one.

“It’s another winner. I guess it’s an achievement, but we are focussed on the 101 now,” he said.

“Lex has been a great supporter of ours, so it’s good it was with one of his horses. The only way it would have been better really is if it was a family-owned horse.”