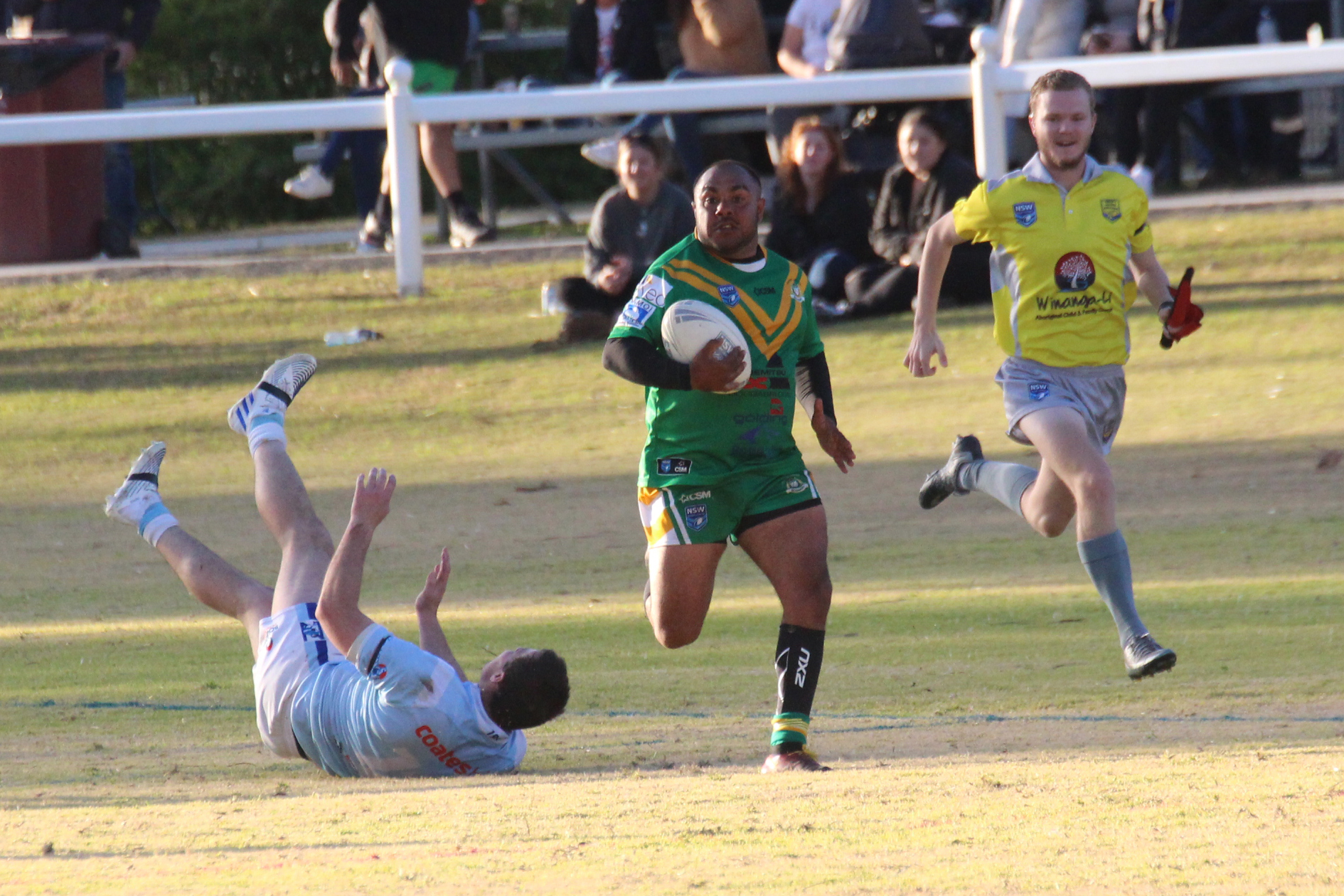 Boggabri Kangaroos five-eighth Kaylan Murray races away to score his third try of the day during a 22-16 first grade victory against the Narrabri Blues at Collins Park on Sunday. The hat-trick hero earned three Group 4 Rugby League best and fairest points following a man-of-the-match performance.

Boggabri and District Rugby League Football Club’s first grade side scored one of the gutsiest wins that its proud coach Shane Rampling said he had ever seen in his coaching career when the Kangaroos beat the Narrabri Blues 22-16 at Collins Park on Sunday.

The Boggabri men remained on the heels of the top four sides despite a chunk of their engine room being unavailable through work commitments and injury.

On top of that, they lost one of the form players of the competition in the first half in Rob Doolan, who was playing fullback in that match and scored the side’s first try, as well as winger Jarrad Adams. That left the visiting side with two substitutes, which later became one.

They also were playing with 11 men at one stage in the first half when two players were sitting down in the bin.

However, the Kangaroos managed to produce a phenomenal win as they downed Narrabri for the second time this season.

The visitors outscored the Blues 10 points to six in the second stanza after leading 12-10 at the break, much to the delight of Rampling, who told The Courier that he was proud of his men.

“Like I said to the boys after the game, it’s the most gutsiest effort I’ve ever seen since I’ve been at this club and probably in my coaching career,” he said.

“Seven out, one left on the bench, it was just guts, and they just defended like their lives depended on it. I really couldn’t be more proud of the boys, to be honest.

“We held them up over the line four times in the last 10 minutes.”

“There were a few times we gave away stupid penalties and dropped the ball, but we were lucky they did the same thing.”

Narrabri started the game on the front foot and threatened early when Daniel Howe broke the line deep in his own half and charged into enemy territory before offloading to his front row partner Daniel Jobson, who was eventually tackled.

The Blues lost the ball during that set, but when they had possession next, they made the visitors pay with a fifth-minute try as their left winger Thomas Bruce opened the scoring. Jock Small slotted the conversion to make the score 6-0.

However, that lead was short-lived as Boggabri equalised two minutes later. Former Blues duo Isaiah Adams and Rob Doolan did the damage as Adams broke the line on halfway and charged 30 metres down the left edge before passing inside to Doolan who went over for his 11th four-pointer of the season and then converted his own try from right in front.

The home side regained the lead in the ninth minute when its fullback Damon Gleeson made a sweeping run around the ruck down the right edge and ran into the defensive line before passing to centre Sam Sadler, who charged his way over in the
corner to put the Blues ahead 10-6.

Boggabri’s halves partners Trindall and Murray combined to put their side in front for the first time in the 36th minute when Trindall kicked from centre field, close to the tryline, to the left edge where the visitors had the Blues outnumbered. Murray caught the ball and dived over to score before Trindall kicked the conversion to make the score 12-10.

Boggabri went into half-time with that two-point lead and then brought the large crowd to its feet early in the second stanza when Trindall cleverly kicked from the right edge inside to Murray, who caught the ball and ran over untouched.

However, he was ruled to have been offside and the score remained 12-10.

On the half-hour mark though, the five-eighth would not be denied when he ran onto a short ball close to the line and went through a hole to score. Trindall added the extras to put his side ahead 18-10.

That became 22-10 with 18 minutes left to play when Murray struck again. This time he scooped up a loose ball 10 metres out from his own line after he reacted quickest to a Narrabri error and then ran 90 metres to go over in the left corner.

In an error-riddle contest, Narrabri finally controlled the ball in the 75th minute and turned some good field possession into points when Sam Sadler scored his second try of the day. Jock Small slotted the conversion from the right sideline to make it a one-possession game at 22-16 with four minutes left to play.

Narrabri then knocked the ball on from the kick-off, but Boggabri coughed up possession during its next set before Narrabri was marched upfield by two penalties.

The hosts had one final set on the Boggabri line to score a try, which would have seen them kicking to equalise, however, Boggabri held strong and kept the Blues out to hold on and secure a six-point win.

Trindall captained the Kangaroos for the first time in that win against his former club and like Rampling, was proud of the side’s fighting spirit.

“It was good, an honour to captain a proud little club,” he said.

“I enjoyed having a crack at it.

“It was a scrappy game, and we had to fight for everything we got. I’m very proud of the boys.

“We knew it’d be tough and Narrabri has an unreal forward pack.”

Trindall said that while it was a full team effort, Murray and White were impressive in the spine.

“Kaylo is a huge asset to us and he played well today again,” the halfback said.

“Ash White was good too, he’s only a little guy and played 80 minutes at hooker.”

The win was one that saw Boggabri remain in fifth place behind the North Tamworth Bears and the Dungowan Cowboys, which are first and second on 16 points, and also third-placed Kootingal-Moonbi Roosters and the fourth-placed Moree Boars, which are both on 14 points.

Boggabri is also on 14 points but trails the two sides directly in front of it on for and against difference.

“It’s massive,” Rampling said of the importance of Sunday’s win.

“To beat Narrabri at home is a big thing in itself, but they were two points behind us, and they’re four behind us now.

“It’s a massive win that keeps us in touch with the top four too.

“We’ve got to move on to a massive game next week, the Boyde Campbell Cup against Gunnedah at home.

“We can’t leave this one here and not build on it. We’ve got to take that effort into next week.

“Every game is hard and you’ve got to turn up to play every week.”

Rampling said he expected Doolan to be fit to play when the Kangaroos meet the Bulldogs at Jubilee Oval in round 11 on Saturday, and added that skipper Matt Gillham and fellow key players Nic Millar, Nick Lyons, Matt Avendano and Selesitino Penisoni would return to the lineup.

The other three first grade games in round 10 were all played on Saturday. Top two sides North Tamworth and Dungowan were both winners as the Bears scored a 70-10 victory away from home against the last-placed Manilla Tigers and the Cowboys beat the Roosters 34-16 on home soil. The other match was won by seventh-placed Werris Creek Magpies, which beat eighth-placed Gunnedah Bulldogs 38-6 at home, while the Boars had the round 10 bye.

While Boggabri will go in search of a second consecutive win on Saturday in round 11 when it hosts the Boyde Campbell Cup match, the Blues will look to snap their three-game losing streak when they travel to take on North Tamworth on Sunday.

Meanwhile, the Narrabri Blues had success in the lower grades as the club celebrated its first ladies league tag win of the season to kick off the day in style when the Bluebirds outscored the Boggi Roos 16-8. Narrabri then secured its fifth win of the reserve grade season when it beat Boggabri 54-8 to finish the round in fourth place (more to come on those games).

A minute’s silence was held prior to all three games played at Collins Park on Sunday to remember under-18s player Brock Mallows, who tragically died in a car accident last week.