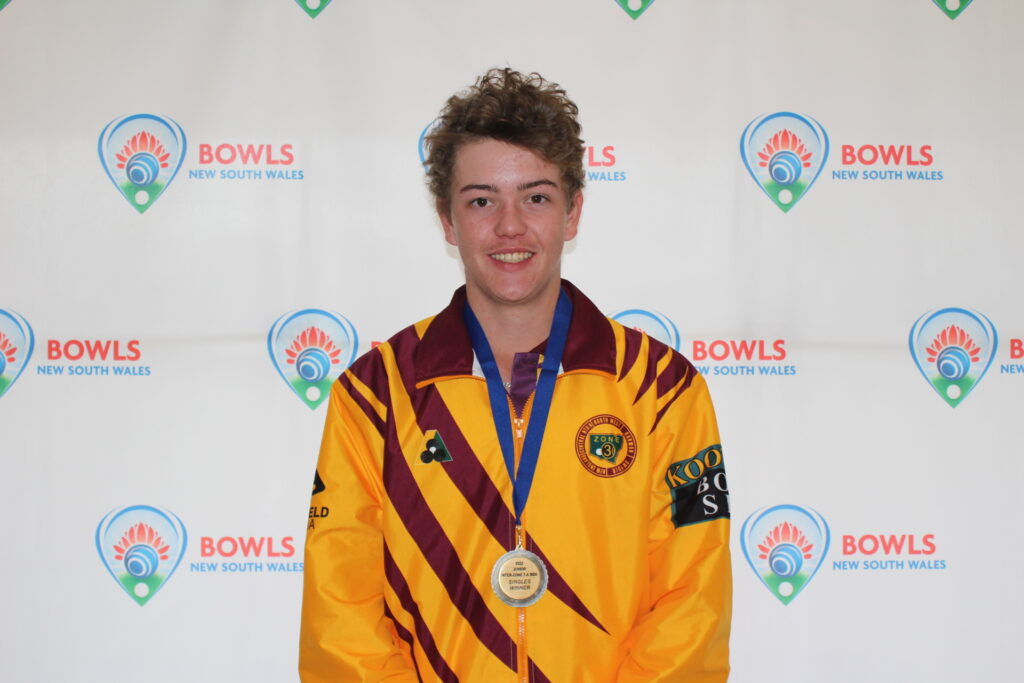 Dustyn, who is the son of Peter and Melissa Allen, represented Zone 3 at the under-18 event, which was hosted by Club Dubbo on Tuesday, July 12, and Wednesday, July 13.

Zone 3’s pairs side placed sixth and its fours side finished seventh, which combined with Dustyn’s gold medal finish saw the team rank third overall behind the winners Zone 4 Grey and runners-up Zone 16.

There were 14 bowlers in action in the singles division at the 2022-23 state Junior Inter-Zone Seven-A-Side Championships. They were all spread across four sections, two of which consisted of four bowlers and two of which included three bowlers.

Dustyn was placed into section three alongside the bowlers from Zone 4 Green (Dubbo Macquarie’s Lincoln Clark) and Zone 8 (Wagga Rules’ Harrison Conroy) and prevailed 21-4 and 21-6 to top the section and progress to the semi-final playoff stage alongside the other three sectional winners.

Dustyn beat Tom 21-18 to advance to the final, where he met Ryan, who had won 21-19 in the other semi-final against Daniel.

Dustyn was victorious in that final as he outscored Ryan 21-15 after 24 ends of play to be crowned the 2022-23 event’s singles champion.

The Wee Waa boy got off to a flying start in the decider with three shots on the first end before Ryan tied the score at 3-all after three ends of play.

Dustyn regained the lead with two shots on the fourth to go ahead 5-3 and then scored two more on the fifth and another on the sixth to lead 8-3.

Dustyn and Ryan scored a shot each across the next two ends before the Wee Waa bowler extended his lead to eight shots with a three on the ninth end to make the score 12-4.

Ryan reduced that deficit to four shots with a one on the 10th and 11th ends and then a two on the 12th end, but Dustyn ended Ryan’s run with a three on the 13th end to go ahead 15 shots to eight.

That became 17-8 at the completion of the 15th end as Dustyn scored two shots to none across two ends, which meant that he required just four shots to be crowned champion.

Ryan fought back with a two on the 16th end, but Dustyn edged closer to victory when he scored a one on the 17th and 18th ends to go ahead 19-10.

The Cabramatta boy was certainly not going down without a fight and he scored five shots to nothing across the next five ends of play to make the score 19-15.

However, it was all over on the 24th end as Dustyn scored the two shots he needed for victory as he claimed the singles gold medal with a 21-15 win during his last day as a 16-year-old.

Wee Waa Bowling Club’s Brett Pillar was the coach of the Zone 3 team. He told The Courier that he was impressed with the way Dustyn kept his cool in all of his matches across the two days and said that the Wee Waa youngster played brilliant draw shots on both days.

There was added pressure during the decider as it was live-streamed on Bowls NSW’s Facebook page (the match with commentary can still be watched online) and was also marked by former gun Australian bowler Brett Duprez.