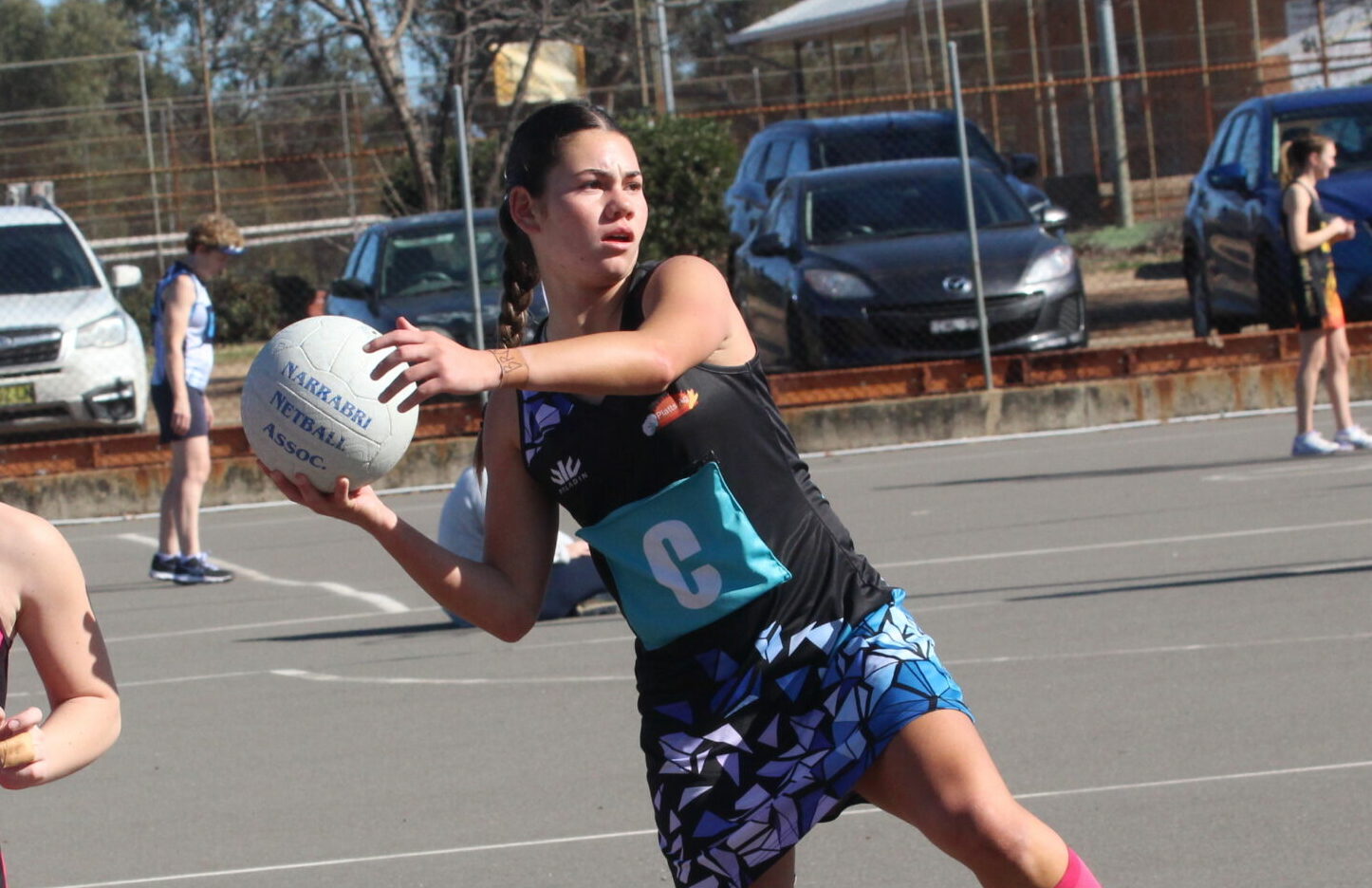 Not Fast But Furious’ Miranda Hamilton in action at the Bev Burrows Courts on Saturday during her side’s one-point A-grade win against Pharmacy Flamingos.

Narrabri Netball Association’s 2022 season resumed at the Bev Burrows Courts on Saturday but top-ranked A-grade side Fever was forced to wait yet another week to get back on court.

Fever had not played since round five back on Saturday, June 4, after it received a round six forfeit and then sat out with the bye in round seven before the competition paused for a four-week holiday break.

The ladder leaders were scheduled to play against Vicious Delicious in round eight on Saturday, however, that game did not go ahead as Fever’s opponents forfeited.

That result saw Fever finish the weekend in first place on 12 points, a win clear of the second-placed Wee Waa Flames. The undefeated Flames sat out on Saturday with the round eight bye and remained on 10 points.

Third-placed Not Fast But Furious and fourth-placed Tourist Tornadoes were victorious in the two A-grade matches that went ahead at the Bev Burrows Courts. Those two sides finished the day locked on nine competition points after Not Fast But Furious edged out fifth-placed Pharmacy Flamingos 33-32 in a nail-biting contest, and the Tornadoes accounted for last-placed Golfie Grubs 63-28.

Meanwhile, only two of the four scheduled matches were played in the B-grade competition on Saturday as two teams forfeited.

Win Or Booze forfeited against Hot Shots, and Pretty Poison forfeited against Win Diesel, and now all four of those teams will have to wait until round nine this weekend to play their first matches after the holiday break.

All Nets reclaimed top spot on the B-grade ladder with a 38-9 victory against the fourth-placed Blue Rebels. All Nets went into round nine locked on 12 points with The Goats but were ranked second when the goals for and against percentage was calculated.

The Goats managed to outscore the last-placed Wilga Warriors 42-16 on Saturday. However, The Goats’ points were taken off them after they fielded two ineligible players in the match.

Narrabri Netball Association told The Courier that although it was an honest mistake, the two players used by The Goats breached competition rules, and therefore, Wilga Warriors were awarded the win.

Earlier in the day, all three under-11/12 matches were played and all three were close contests. Swifts earned their first point of the season as the last-placed side held ladder leaders Namoi Cotton Thunderbirds to a 7-all draw, while second-placed Magpies edged out fourth-placed Lightning 14-13 and third-placed C and W Firebirds overcame fifth-placed Giants 9-5.

In the under-9/10 competition, the Valley Vixens forfeited their two games, and The Roses downed The Diamonds 7-0. Those results saw The Roses move within two wins of the top-ranked Valley Vixens.