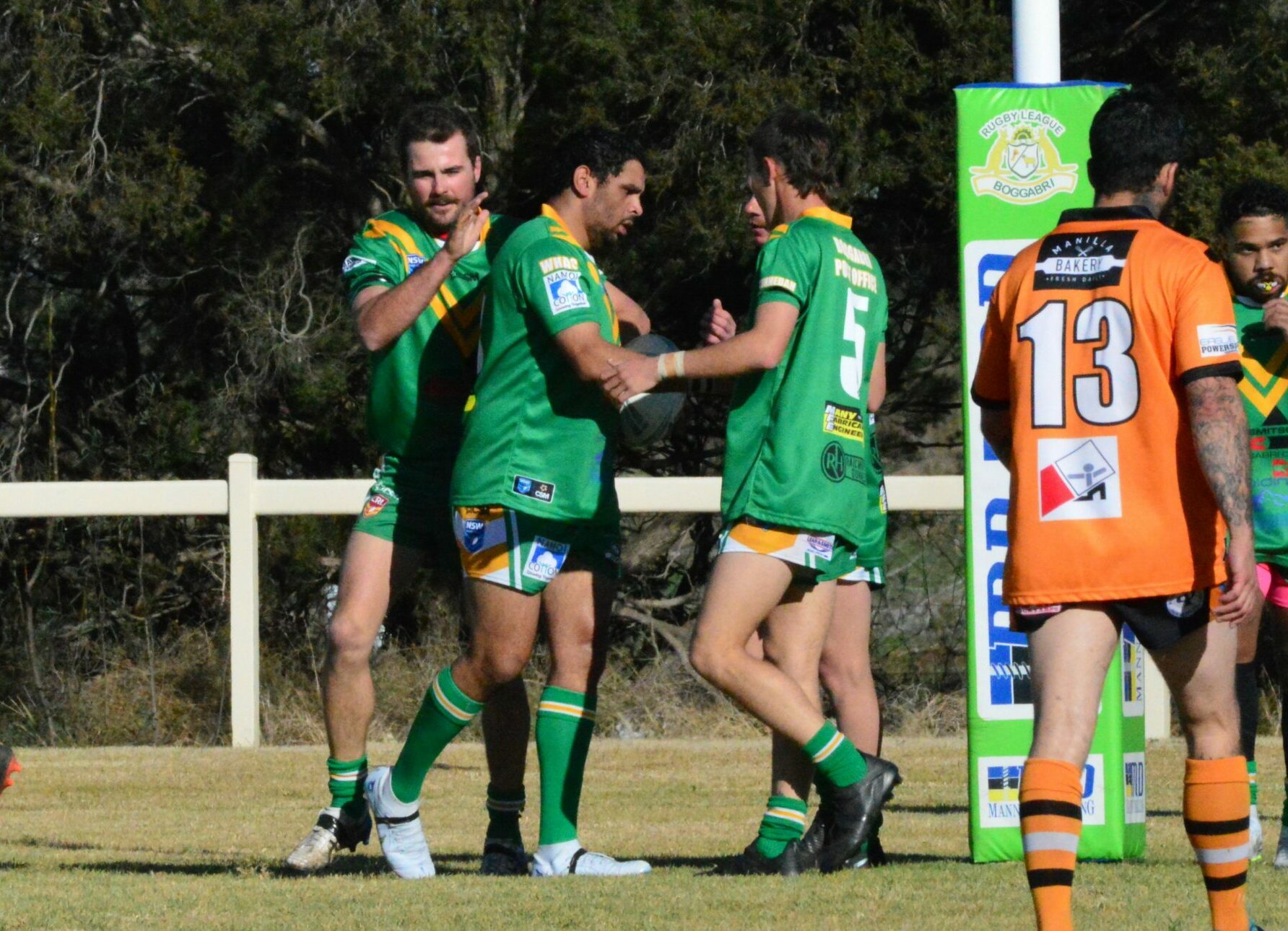 Boggabri and District Rugby League Football Club first grade centre Rob Doolan celebrates one of his three tries with teammates at Jubilee Oval on Saturday during the Kangaroos’ 54-28 win against the Manilla Tigers. Photo: Sue Haire

Rob Doolan is back and so is Boggabri and District Rugby League Football Club’s winning ways as the Kangaroos secured a vital two points following a 54-28 first grade victory in the 14th round of the Group 4 Rugby League season on Saturday.

Boggabri hosted the winless Manilla Tigers at Jubilee Oval, where a loud home crowd cheered the hosts to the victory on what was the club’s annual sponsors’ day.

The Kangaroos crossed for 10 tries to five and kicked seven goals to four in the 26-point win and Doolan had his fingerprints all over the victory.

The gun centre crossed for three tries and kicked seven conversions to finish the match with 26 points in his first game since limping off as his team scored an away win at Narrabri in round 10 on June 19.

The Boggabri men had suffered three consecutive losses since then, and their coach Shane Rampling was thrilled to finally snap that streak on Saturday.

He told Group 4 Media that while the Kangaroos switched off several times throughout the match, he was happy with his players’ efforts as they did enough to earn the two points.

He was also particularly impressed with his opponents.

The Tigers arrived at Jubilee Oval short in the ladies’ game and with just 17 players in the men’s squad, 15 of whom backed up to play in the first grade game following a 52-22 reserve grade victory.

The fact that they powered through that player shortage to ensure the Kangaroos were able to host three games on their sponsors’ day earned the praise of many from the Boggabri club.

“Full credit to Manilla. They had a few boys backing up from reserve grade and didn’t forfeit,” Rampling told Group 4 Media.

“They are struggling, but we’ve been there too. Hopefully they will stick the season out.”

Dominant front row forward Nick Millar arrived at the ground late and played off the bench to produce yet another brilliant performance that saw him earn three Group 4 best and fairest points, while Doolan picked up one.

Earlier in the day, Boggabri won its first game in the ladies’ league tag competition since round one as it outscored the Manilla ladies 12-6.

Mia Stewart, Isabelle Byrne and Clare Mead all crossed for a try for the hosts in that match, while Ashlee Haire received three Group 4 best and fairest points and Molly Kemp earned one.

Boggabri’s’ first grade side remains just one win outside the top four at the completion of round 14 following the Moree Boars’ 38-26 win against Narrabri Blues.

The Boars moved to 18 points and the Kangaroos remained hot on their heels as they jumped to 16 points.

Former Boggabri Kangaroo Rob Condran scored four tries for the Blues at Boughton Oval on Sunday against Moree, but the 2021 minor premiers suffered a seventh straight loss and are now officially out of the top four race. That leaves the Boars, Boggabri and Werris Creek all battling it out for the fourth finals spot.

Werris Creek’s charge towards the top four continued at the weekend as it picked up two points by sitting out with the bye after it scored its fourth win in six matches on July 9.

The sixth-placed Magpies are now on 14 competition points, four clear of seventh-placed Narrabri.

Other round 14 results saw the top two teams score crucial wins as the battle for the 2022 minor premiership rages on. North Tamworth Bears travelled to Kootingal on Saturday, where they downed the third-placed Kootingal-Moonbi Roosters 28-16 to remain on top of the table, while the Dungowan Cowboys hosted Gunnedah Bulldogs on Sunday and scored a 30-16 victory to stay in second.

The Bears and Cowboys are locked on 24 points but the North Tamworth men have a 40-point superior for and against difference.

Those two sides meet this Saturday in a blockbuster match that headlines round 15. The winner of that game at Jack Woolaston Oval will finish the weekend in outright first place.

The Cowboys enter the match on a 10-match winning streak, while the Bears go into it having won their past eight consecutive games.

Kootingal-Moonbi will host Werris Creek in the other Saturday game this weekend, then the Narrabri Blues will welcome the Manilla Tigers to Collins Park on Sunday while the Bulldogs host Moree.

Boggabri will use this weekend’s round 15 bye as a chance to regroup and get some players back on deck.

Rampling challenged his men to be better after the break when they host Kootingal in round 16.

“We’ve got to be better than that when we play Kootingal,” Rampling told Group 4 Media on Saturday.

“We have to enjoy today’s win but then regroup and prepare for Kooty.

“Hopefully, we’ll get a few more players back for that.

“We have to try and win every game from here on and keep the pressure on Moree.”