Narrabri FC does the double against Wee Waa United 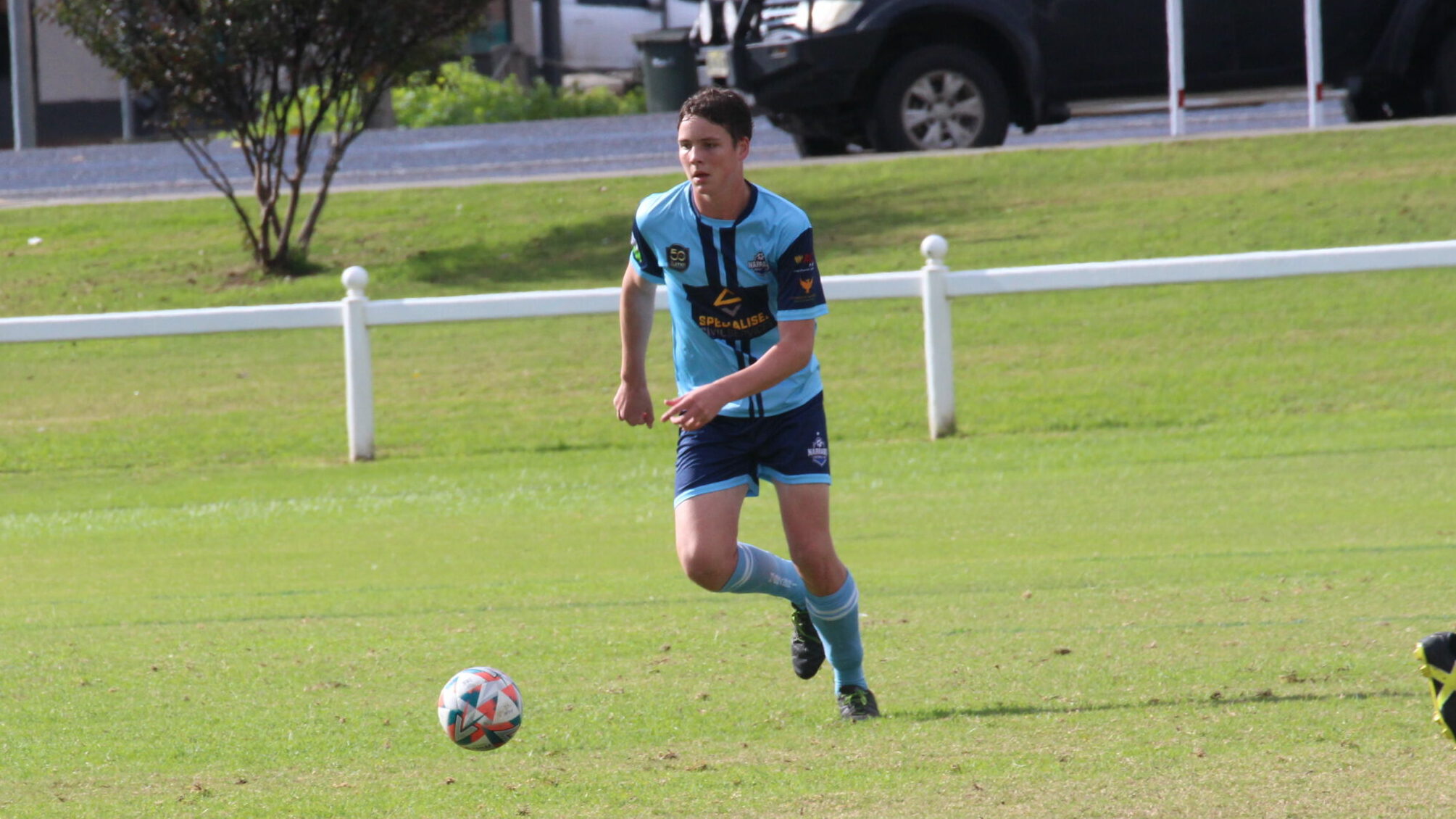 Callum Wales in action at Hogan Oval, where he scored a second-last-minute winner for Narrabri FC in its 2-1 reserve grade win against Wee Waa United FC on Saturday.

Narrabri FC completed a season first on Saturday when it downed rivals Wee Waa United FC in both grades at Hogan Oval.

The Narrabri club’s first and reserve grade sides were unable to claim three points against Wee Waa United on home soil in round one or away from home in round six, but both got the job done under lights in their Namoi Soccer League round 11 matches.

The hosts won the reserve grade game 2-1 and they prevailed 4-1 in the first grade game, which saw both teams keep pace with respective ladder leaders Inverell FC.

Inverell is first in both competitions and was victorious in both grades in Gunnedah as its sides beat Gunnedah FC 2-1 in first grade and 5-0 in reserve grade.

Like Narrabri FC and Inverell FC, Moree Services FC also completed a round 11 double as it beat Narrabri Eleven FC 3-1 in first grade and 11-0 in reserve grade.

Wee Waa is still on 20 points as it fell more than two wins back in the minor premiership race. However, the Wee Waa side is still four points clear of the fourth-placed Gunnedah FC.

Moree’s win saw it finish the day on nine points as it moved within seven of Gunnedah FC, while the Elevens remained on no points.

In reserve grade, undefeated leaders Inverell FC extended its win streak to 11 games to move to a maximum 33 points while remaining 11 clear of Moree Services FC, which is now on 22 points following its win.

Narrabri FC is third on 14 points as it leapfrogged Wee Waa United, which remained on 13 points following its loss against the Narrabri side.
Gunnedah is fifth on 11 points, and the Elevens are last on one point.

At Hogan Oval on Saturday night, Wee Waa was the stronger team in the first half of the first grade game and established a 1-0 lead when a Nick Gorton cross flew over Narrabri FC goalkeeper Zaac Brayshaw and crept inside the right post.

Wee Waa went into half-time with that 1-0 lead, however, Narrabri FC equalised 10 minutes into the second stanza when Blake Jarrett scored a header from six yards out after getting onto the end of a Cooper Brayshaw free kick.

The hosts then took the lead in the 68th minute when another Brayshaw set piece led to a goal. The midfielder whipped in a corner, and centre-back Vincent Labonte rose highest and headed the ball towards goal. It cannoned out off the crossbar and Colby Williams reacted quickest and drove the ball into the bottom left corner to make the score 2-1.

That became 3-1 two minutes later when Brayshaw scored the goal of the game with a strike from 20 metres out that flew over the head of Wee Waa goalkeeper Steve Phelps and dipped just under the crossbar and into the top right corner.

Jake Brayshaw became Narrabri FC’s fourth goal-scorer of the game in the 78th minute as he finished a one-on-one chance with a powerful strike from a tight angle across Phelps into the bottom right corner after Brenton Cochrane guided the ball into his path with a superb contested header.

That was the final goal of the game as the hosts ran away with a 4-1 win.

In the reserve grade match between those two clubs, Narrabri FC took a 1-0 lead with two minutes remaining in the first half when Matt Edmonds found the bottom right corner with a cracking strike from just outside the 18-yard box.

Alisha Conomos equalised for Wee Waa midway through the second half, but Callum Wales ensured his side would earn the three points as he scored his first Namoi Soccer League goal with two minutes left to play.

That made the final score 2-1 after the hosts defended desperately in the final 100 or so seconds to deny Wee Waa an equaliser.

Round 12 games this Saturday will see Wee Waa United return to Cook Oval for home games against Gunnedah FC, while the two Narrabri sides will both travel.

The Elevens will take on Inverell, and Narrabri FC will challenge Moree Services FC.