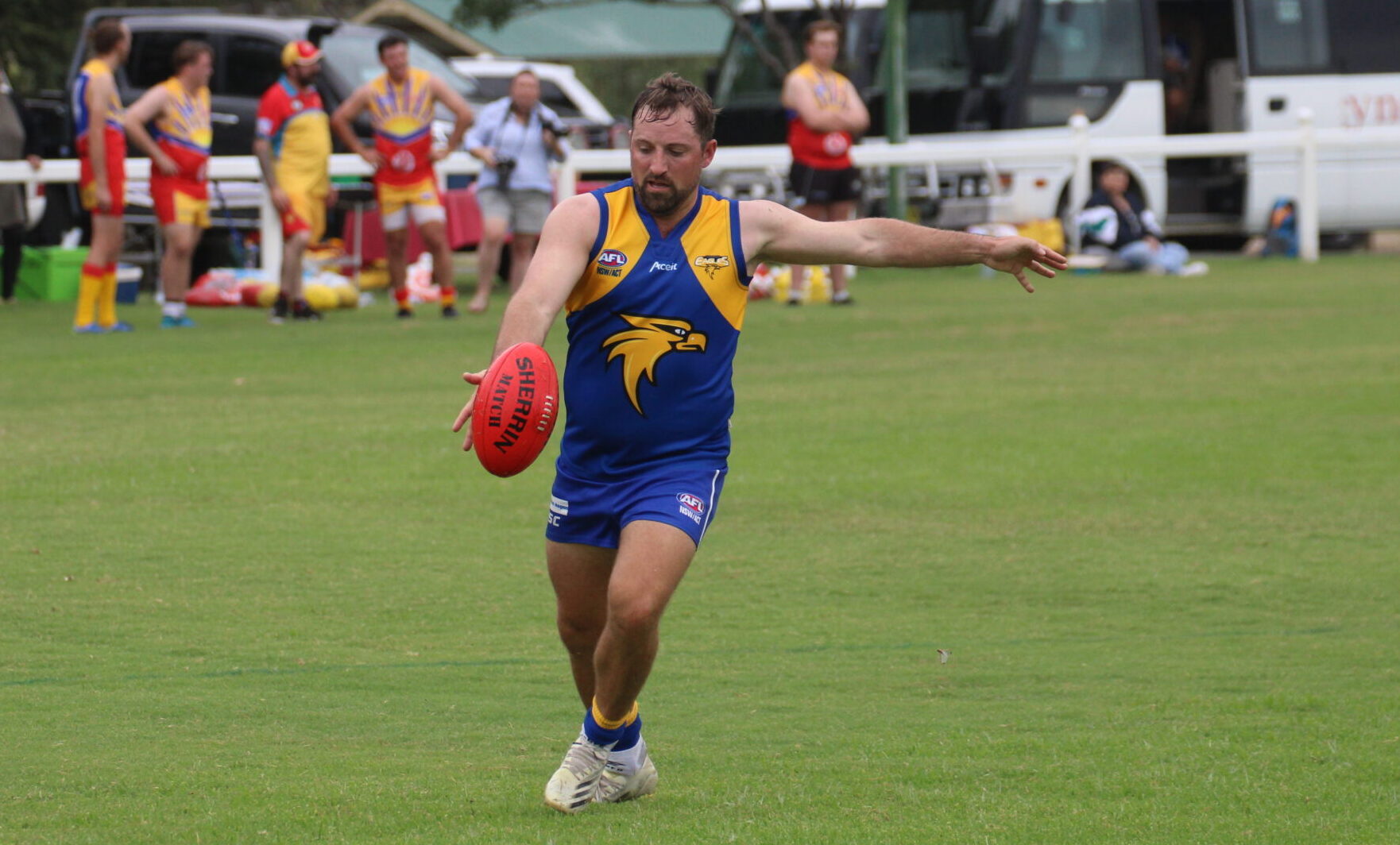 Narrabri's Ray Nixon, pictured above in action at the 2021 Crossroads Cup last month, will play his first game of the AFLNW season for Narrabri Eagles Moree Suns on Saturday afternoon at Leitch Oval.

The Narrabri Eagles Moree Suns joint venture team began its 2021 AFLNW campaign with a 14.9 (93) to 12.14 (86) victory against New England Nomads in round one on Saturday, April 17, but has since been beaten convincingly in its round two and three matches.

In round two on Saturday, April 24, defending champions Gunnedah rediscovered their 2020 form with a 136-point demolition of the Eagles-Suns.

The Bulldogs outscored the joint venture side 26.10 (166) to 4.6 (30) as they bounced back from a 33-point loss at home against Tamworth Kangaroos in round one.

Eagles-Suns then travelled to Inverell to take on the Saints on Saturday where they suffered another heavy loss.

That was the Saints’ second consecutive win after they were big winners in round two, bouncing back from a 63-point round one loss against Tamworth Swans with a 15.11 (101) to 8.7 (55) victory against the Kangaroos.

In round three, New England Nomads scored their first win of the campaign, demolishing defending champions Gunnedah 24.20 (164) to 2.6 (18) at Bellevue Oval in Armidale.

The Eagles-Suns will play their second home game of the season this Saturday when they welcome the Tamworth Kangaroos to Leitch Oval for the sides’ round four clash.

It will be the joint venture side’s first match in Narrabri after its season opener was played in Moree on April 17.

NEMS will be without player-coach Dan Nixon who suffered an injury in last weekend’s loss against Inverell, however, it will welcome back Ray Nixon who plays his first game of the 2021 season after leaving the field with an injury at last month’s Crossroads Cup pre-season tournament.

Dan Nixon told The Courier that the Narrabri players were pumped to be playing at the ‘Eagles’ Nest’ Leitch Oval in front of a Narrabri crowd on Saturday.

Nixon said the side was still searching for new players and that anyone keen on having a kick for NEMS was welcome to come along to training or get in touch with the Narrabri Eagles via Facebook.

In other round four games this weekend, round three winners New England and Inverell will go head-to-head in Armidale while round three losers Tamworth Swans and Gunnedah Bulldogs meet at Tamworth’s Number One Oval.