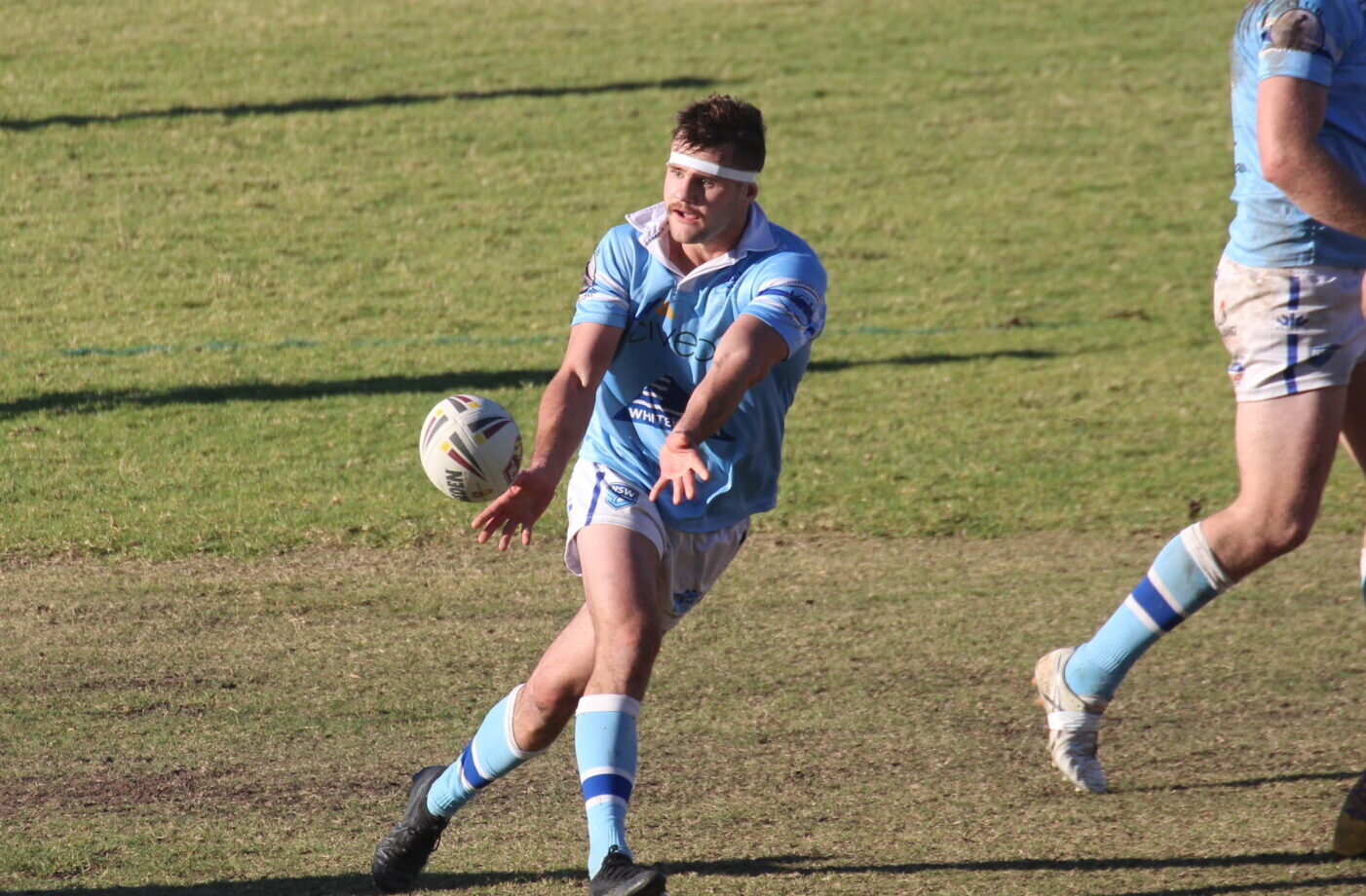 It wasn’t pretty but it certainly got the job done – the Narrabri Whitehaven Blues escaped with the two points when they scored a 16-12 golden point win against the Dungowan Cowboys in round six of the 2021 Group 4 Rugby League season at Collins Park on Saturday.

Remarkably, the hosts never led during 80 minutes of regulation time but they managed to get the job done in overtime when Jacob Nichols made a quick dart out of dummy half, catching the Cowboys’ defence off guard as they were preparing for what they predicted would be a Todd Nichols field goal attempt.

The hooker threw a dummy, found a gap and raced over to score off the back of a quick Sam Sadler play-the-ball which brought the Collins Park crowd alive as they cheered on their side to its fifth victory of the season.

It was Nichols’ sixth try in as many games this season and it was his most important one yet. He is currently the Blues’ leading try-scorer and is second on the Group 4 Rugby League tally behind North Tamworth’s Tevita Peceli who has 10.

Narrabri and Dungowan were locked 12-all when the full-time bell sounded on Saturday despite the visitors scoring three tries to Narrabri’s two.

Dungowan missed all three of their conversions while returning Blues halfback Todd Nichols kicked both of his side’s, one of which was from the sideline to tie the game up late in the contest.

That was after winger Lachlan Trindall went over in the left corner for his side’s second try of the day. The first was scored by captain-coach Jake Rumsby whose try made the score 8-6 in the second stanza after the Cowboys led 8-0 at the break.

Rumsby led from the front yet again and earned one Group 4 Rugby League best and fairest point to take his season tally to four while teammate Toby Howarth earned the three points.

The captain-coach told The Courier that the long weekend break had come at the right time for his team which will travel to Tamworth for a huge clash with the North Tamworth Bears in round seven on June 20.

“That first half we were terrible,” Rumsby said of Saturday’s match.

“I don’t know what changed, we stayed in the sheds pretty much.

“We said a few truths at half-time and started better in the second half and rolled on from there.

“We no way deserved to win that game.

“But the positive out of it, we still turned up for each other right until the death.

“We go back to the drawing board now, we can’t start like that against North Tamworth in two weeks’ time.

“We came into today’s game off the back of two hard games against Kootingal and Gunnedah, a lot of us have been looking forward to the week off.

“The break has really come at the right time for us.

“We’ll recharge the batteries now and we should be back at full strength for the game at North Tamworth.”

The Bears went into round six ranked first on the ladder, leading second-placed Kootingal and third-placed Narrabri by for and against difference.

All three of those sides had accumulated eight points but only two of them finished round six with 10 points after North Tamworth went down and Kootingal was victorious.

The Roosters beat Boggabri Kangaroos 44-24 at home on Saturday, then the Bears lost 32-24 against Werris Creek at David Taylor Park on Sunday.

Moree Boars won the other round six match when they beat Gunnedah Bulldogs 30-27 at Kitchener Park on Sunday.