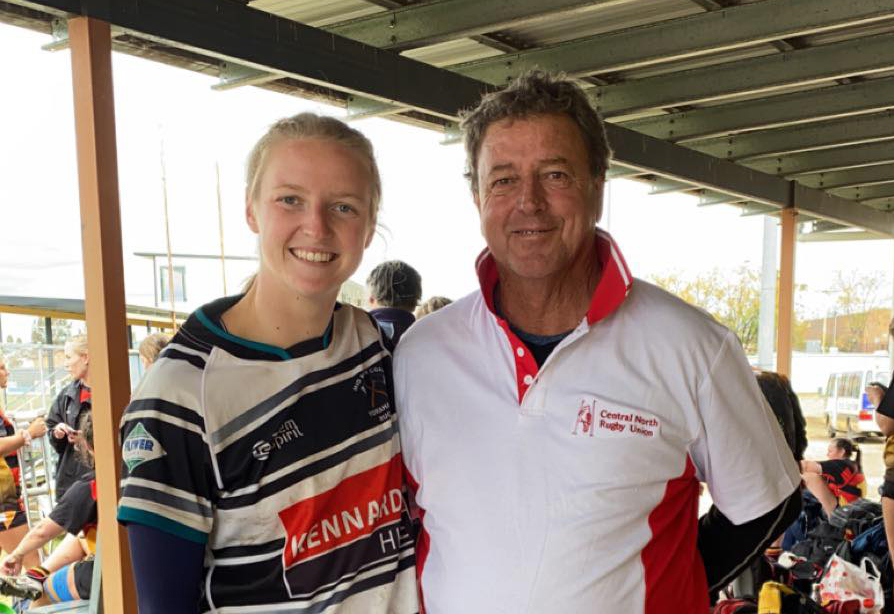 Following a devastating knee injury in 2019 which kept her out of the game for almost two years, Lauren Nott has not only made a successful return to rugby – she’s absolutely blown it out of the water.

Lauren is the daughter of Narrabri’s Wayne and Kim Nott.

Earlier this week she was selected into the NSW Country Corellas squad to play at the Senior National XVs Championships in Adelaide in September, a prestigious honour and an opportunity she looks forward to grabbing with both hands.

Nott recently captained the Mid North Coast zone at the 2021 NSW Country Champs tournament which was held in Tamworth on Saturday and Sunday, June 12 and 13.

She was a standout at that event, courageously playing 240 minutes of rugby in two days for her side which won two of its four matches and placed fourth.

The NSW Country team was then named on Monday which featured five Mid North Coast players including Nott.

The gun number eight told The Courier that she was excited to finally get the chance to represent NSW Country following the knee injury in 2019 which denied her what should have been her debut that year.

“I’m so excited, I’ve waited two years to be able to put that Country jersey on,” she said.

“It’s my second NSW Country selection but I tore my ACL when I got picked in 2019. I did it in Armidale a few weeks out from when I was supposed to play for Country.

“This year, we are doing a week-long tour in Adelaide at the end of September to play in the Australian Rugby Championships so that’s everything now.

“I’ll be fortunate enough to play with some of the girls at my club and some other girls in my zone and there’s even a couple of girls there from my old Central North zone which is good.

“It will be good to finally put that jersey on.”

Nott enjoyed the 2021 NSW Country Championships campaign. She said it was great to be back on the park, having only played briefly for a day in February this year since her injury.

“I played in a sevens tournament in February and my knee decided to have a moment and blow up so I gave it more time,” she said.

“My first game back was at Country Championships.

“Honestly, by the last game I didn’t have 30 seconds left in me, I spent everything I had on that field.

“It was a big weekend, a lot of minutes to play rugby union, I don’t know if anyone’s ever played 240 minutes in two days.

“But it was really good, all of our girls put in a really good effort, especially towards the end.”

Making the occasion more special for the former Narrabri girl was having the chance to call upon her own personally strapper – her father Wayne.

Wayne Nott is the well-known and highly-respected Narrabri Rugby Club strapper, a role which he also performs for the Central North zone.

While dedicated to his duties and his zone, he couldn’t help but cheer on his daughter even while she played against Central North.

“Dad couldn’t help himself when I asked him to strap for me, but nor would I get anyone else to do it for me,” Lauren said.

“It was really good.

“Dad would come across and sit on the bench and watch me play and even when we played Central North he was still yelling out and supporting me, even though we were playing his zone.

“It was nice to hear him on the sideline, you can always hear his voice from a mile away.”

The Country Championships tournament was Nott’s first outing for her new zone since relocating to Port Macquarie where she work as a registered nurse in the cardiac catheter lab at Port Macquarie Base Hospital.

She last played at the NSW Country Champs for Central North when she captained the zone in 2019.

At club level, Nott is currently the coach at the Wauchope Thunder Rugby Club in the lower Mid North Coast competition and will play her first game for the Thunder’s undefeated women’s 10s team on Saturday.

Meanwhile, Nott is also currently enjoying a different role in the representative rugby union arena in 2021.

She is currently the manager of the Central North zone’s junior under-16s girls’ side which includes Narrabri Holly Ford.