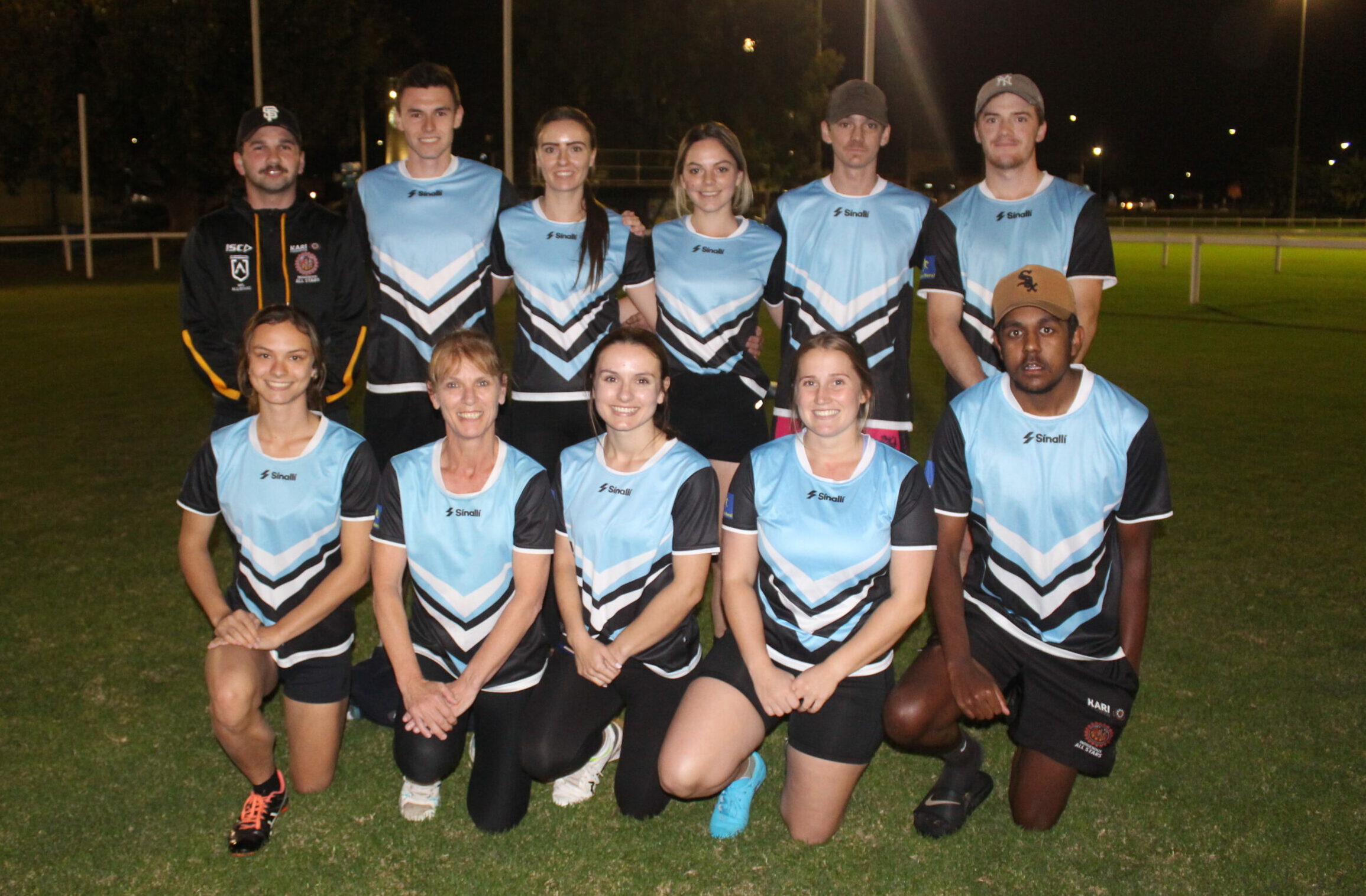 Agies finished the 2022 Narrabri Touch mixed competition regular season on top of the table with 13 wins from as many matches, after defeating Kerrigans 18-0 on Monday night in round 13. The side now has its sights set on the A-grade championship, with the finals series starting on Monday. Pictured are Agies team members - back, Lachlan Trindall, Alex Lucero, Bree Kennedy, Bella and Domonic Cruickshank, Harry Pattison, front, Alisha, Cathy and Teagan Conomos, Alice Woodhill and Clifford Toomey Jr.

Narrabri Touch’s 2022 mixed competition regular season wrapped up on Monday with round 13 games, and all teams have now been graded ahead of the four-round finals series that will begin this Monday, May 23.

In round 13, competition heavyweights Agies continued their undefeated run with an 18-0 victory against last-placed Kerrigans to finish the regular season campaign with 13 wins from as many rounds.

They won four of those matches via forfeit and were victorious in the nine games they played by a combined 85-28, and their official for and against when the forfeits were factored in was 105 and 28. That saw them finish with a competition-best difference of 77.

Agies won its round 13 game by the largest winning margin so far this year as the side broke the record it set itself back in round six on Monday, March 14, when it defeated Cougars 17-1.

Agies’ closest rivals, the Sprayerbarn Spinouts, finished the regular season in second place on the ladder after they scored their 11th win of the year on Monday by defeating Hounddogs 8-3.

There was movement in the top five, with Hammer Time falling from third place down to fifth after losing its final-round match 6-4 against Lumberjacks (and Jills).

That allowed Tapscott Pumpers to leapfrog Hammer Time into third and Tradies and Ladies to rise up the table to fourth after those sides both ended the regular season with wins.

The three teams ranked from third to fifth all finished the season on 33 points after they won 10 matches and lost three. Points difference totals determined their final ladder positions.

Win Or Booze capitalised on TRTW’s loss to jump from seventh to sixth as it scored a 13-4 victory against the Witty Wizards in round 13, which was the side’s seventh of the season.

Who’s Shout entered Monday’s final round in ninth place, which was the position it finished in despite scoring its fifth victory of the year when it beat RSL Guys and Gals 6-0.

The teams ranked in the bottom five from 10th to 14th were Hounddogs, Cougars, Witty Wizards, RSL Guys and Gals, and Kerrigans.

Narrabri Touch held a committee meeting on Wednesday night where the 14 teams were split into three grades.

A-grade will consist of the top five, which includes Agies, Sprayerbarn Spinouts, Tapscott Pumpers, Tradies and Ladies and Hammer Time.

The next four teams, TRTW, Win Or Booze, Lumberjacks (and Jills) and Who’s Shout, make up B-grade, and then Hounddogs, Cougars, Witty Wizards, RSL Guys and Gals, and Kerrigans are the five C-grade teams.

All teams will be in action on Monday, May 23, but not all will compete in finals games.

The A-grade and C-grade finals series will both begin on Monday, but the B-grade teams will not play finals games until Monday, May 30.

In the second week of the finals on Monday, May 30, all three divisions will play major and minor semi-finals, which will be followed by preliminary finals on June 6 and then the grand final night at Dangar Park, the home of Narrabri Rugby Club, under lights on Friday, June 17.

The losers of the minor semi-finals in week two will be eliminated.

Although the top-ranked teams in A-grade and C-grade and all four B-grade teams will not play finals matches in week one of the series on Monday, they will still be in action in social matches.

The full draw and referee appointments for Monday, May 23, are as follows: