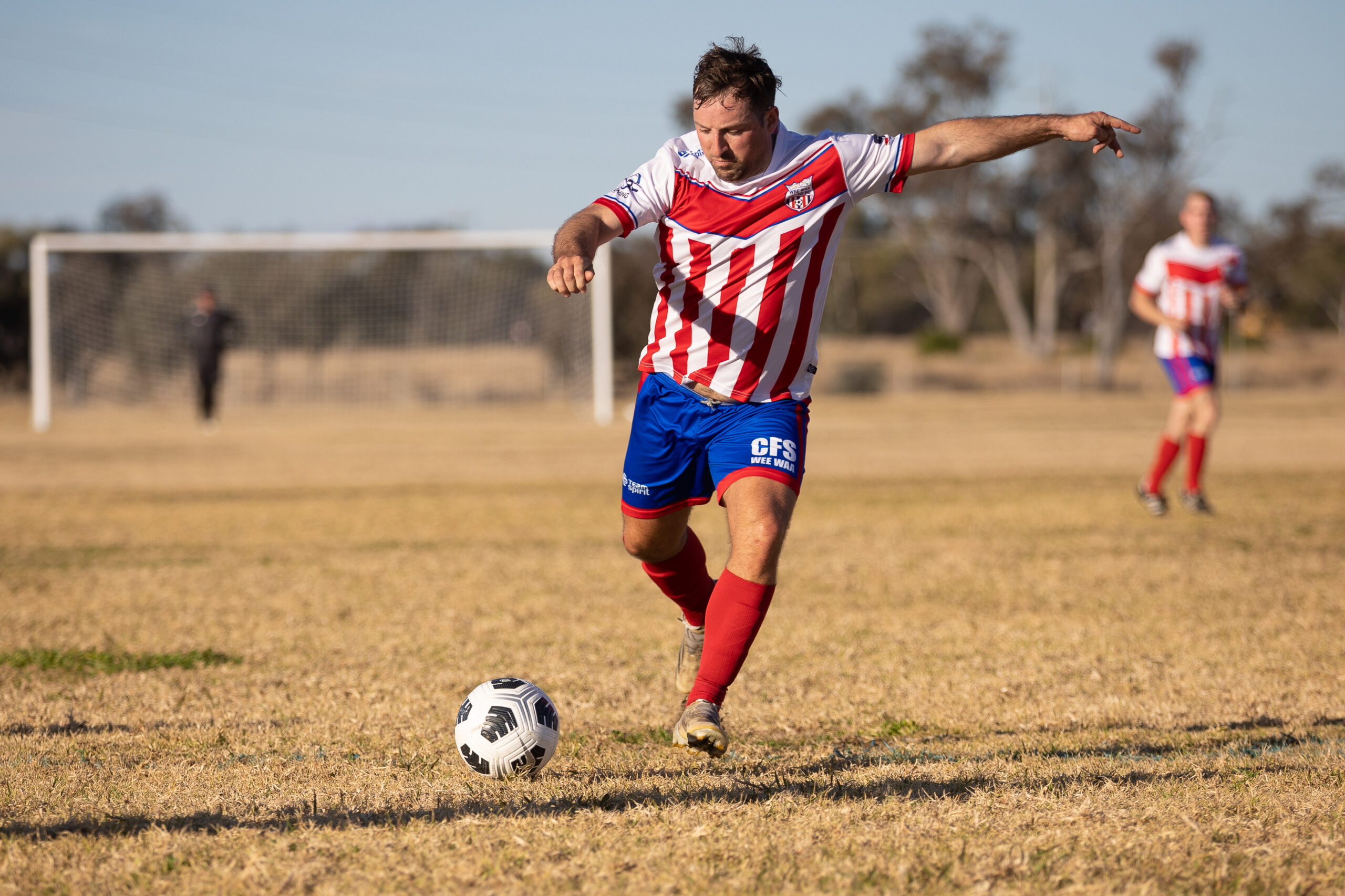 The Namoi Soccer League first grade minor premiership race has started to heat up after victorious trio Narrabri FC, Wee Waa United FC and Gunnedah FC all made ground on first-placed Inverell FC in round eight on Saturday.

The ladder leaders went into their match on home soil against Narrabri FC four points clear of second-placed Wee Waa and five points clear of their round eight opponents.

However, Inverell’s lead at the top now hangs on by a thread after the side suffered its second loss of the campaign when Colby Williams netted a hat-trick in Narrabri FC’s 3-0 victory at the Inverell Sporting Complex.

That saw the five-time defending minor premiers reduce the gap between themselves and Inverell to two points.

A point ahead of Narrabri FC is Wee Waa United, which won two games in three days to finish the eighth round of the season just one point behind Inverell.

Wee Waa travelled to Moree on Thursday where it downed Moree Services FC 3-0 in a round three catch-up match to overtake Narrabri FC on the ladder and finish the night in second place.

Nathan Hamblin and Ben Cooper both scored late in the first half to give their side a 2-0 lead at the break, then Hamblin scored the only goal of the second stanza late in the contest as the visitors secured the three points with a 3-0 win.

The return fixture on Saturday was a far more one-sided affair as Wee Waa earned a 14-0 victory against Moree at Cook Oval.

Wee Waa’s leading goal-scorer Ray Nixon made the score 1-0 in the fourth minute and scored two more in the opening half, while teammates David Avery and Alex Lucero also netted as the hosts entered the break leading 5-0.

Wee Waa then piled on nine more goals in the second half and kept a clean sheet to secure a 14-0 win.

Avery scored four of those nine goals to finish the match with five, while Nixon and Lucero both added one more each and Nick Gorton, Matt Hamblin and Jacob Hopman all netted once each.

Avery, who is the side’s coach, told The Courier that he was happy with where his side is sitting on the ladder at the start of the run home towards the finals.

“We’re very happy with where we’re sitting at the minute,” Avery said.

“We’ve got a couple of good games coming up in the next few weeks with Inverell and Narrabri FC. We really need to get a win over Inverell next time we play them. Hopefully, we can get the job done and get on top. That’s our goal this year.

“We’re happy where we are now though. We pretty much have a new team after picking up a fair few new players this year and as I said we’re really starting to click.”

At Hogan Oval in the other round eight game, Gunnedah FC closed the gap between itself and Inverell to just five points after scoring a 3-0 win against Narrabri Elevens FC.

Player-coach Andy Cygan scored his 11th goal in eight games when he converted from the penalty spot to finish the round at the top of the golden boot tally alongside Inverell’s Andrew Saru.

That goal made the score 1-0 at half-time, which was the way it remained until the final 10 minutes when Zac Crowhurst and Liam Benthem scored a goal each for Gunnedah as the visitors returned home with a 3-0 win.

In Inverell, Narrabri FC produced what coach Neil Brayshaw described as his side’s most complete performance this season as it managed to beat Inverell for the second time in as many games following a 5-4 round three victory earlier in the season.

Williams opened the scoring late in the first half to make the score 1-0 at the break, and then added his second about 20 minutes after play restarted.

He then ran onto a Cooper Brayshaw pass 13 minutes later, which the midfielder played in behind the defence and into the path of Williams, and the striker make no mistake with the one-on-one chance as he extended Narrabri FC’s lead to three.

“Our performance was very good across the whole park,” Neil Brayshaw said.

“I’ve been asking the guys for a few games now to put in a 90-minute performance and I think they nearly did that. They dropped off for about 10 minutes, but it was the most complete performance so far this season.

“They really backed one another. There was a lot of desire from everyone and our intensity was right up there.

“We had to match Inverell’s intensity too. They came out strong and we responded to that and we just kept it going for the entire game.

“It was our best game of the season.”

Brayshaw commended Williams for his clinical finishing in front of goal but was most impressed with his side’s performance at the other end of the field as Narrabri FC kept its third clean sheet of the season.

“It was a top defensive effort right across the backline, but particularly both centre backs, both Nathan (Trindall) and Adam (Pryor). I thought that was their best game of the year together,” Brayshaw said.

“They had confidence in the young fellas outside them in Ollie Stait and Matt Edmonds who both stepped up really well.

“There was a lot of communication out there which was great.

“Zaac (Brayshaw) in goals had a good game too. He made two brilliant saves.”

In reserve grade, Inverell extended its undefeated winning streak to eight games to finish the round on a maximum 24 points after Matt Rose scored from the penalty spot in a 1-0 win against Narrabri FC.

Second-placed Moree and third-placed Wee Waa lost ground on the ladder leaders after playing out a 1-all draw at Cook Oval after Moree won the round three catch-up game 1-0 on home soil two days earlier. Moree now has 16 points and Wee Waa has 12.

Narrabri FC (seven points) and the Elevens (no points) make up the bottom two.