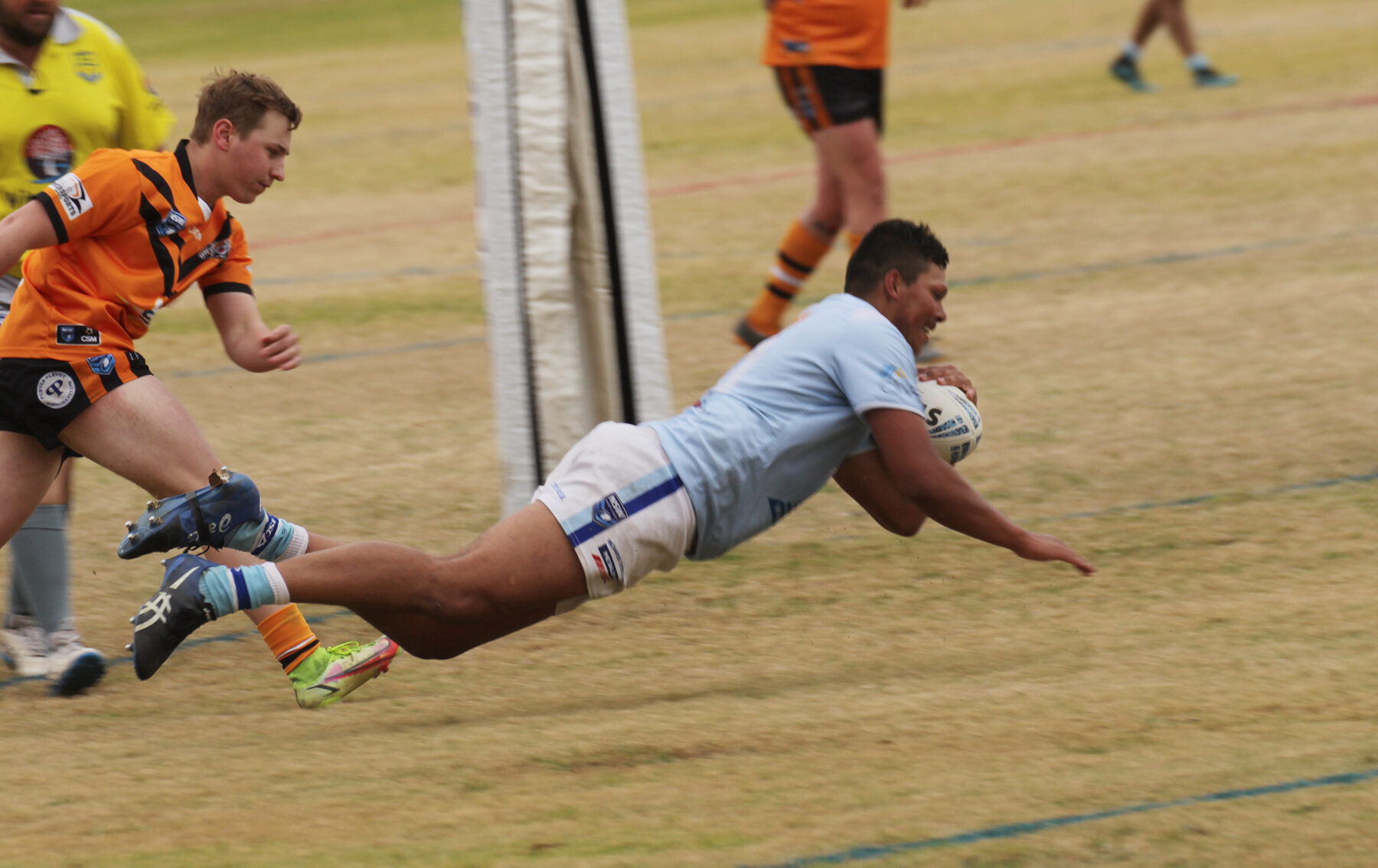 Narrabri Rugby League Football Club first grade back-rower Jeffrey Harvey dives over to score one of his two tries at Collins Park on Sunday during the Blues’ 62-16 victory against the Manilla Tigers. The 19-year-old was awarded the three Group 4 Rugby League best and fairest points following a dominant 80-minute performance during that win.

They might be battered and bruised following what has so far been a ‘season from hell’ according to coach Jake Rumsby, but the Narrabri Rugby League Football Club first grade side was all smiles on Sunday as it snapped a seven-game losing streak in front of a home crowd at Collins Park.

The Blues went into the 15th round of the 2022 Group 4 Rugby League season searching for their first win since round eight back in May, and they found it in style as they knocked off the Manilla Tigers.

The hosts led 34-6 at the half-time break and eventually went on to outscore the Manilla men 11 tries to three and nine conversions to two across 80 minutes of fairly one-sided football as they ran away with a dominant 62-16 win.

The game was a memorable one for Blues youngster Jeffrey Harvey who is enjoying a breakout season for the club. The talented back-rower produced a sensational 80-minute performance, during which the 19-year-old crossed for two tries, made an abundance of metres and tackles, and earned the three Group 4 best and fairest points.

Blues teammates Daniel Howe and Daniel Jobson both played through injuries on the day and lined up on opposite centres instead of in their usual forward positions, and they combined for five tries as Howe went over for a hat-trick and Jobson bagged a double in his 100th game for the club.

The home side’s other four tries were shared between Rumsby, who once again led by example at lock, fullback Tom Bruce and wingers Rob Condran and Tim Shields.

Rumsby told Group 4 Media after the game that although the Narrabri men cannot make the top four and play finals in 2022, he was still looking for a strong finish from his side in the final two games of the season after the round 16 bye this weekend and a full competition bye the next weekend.

“We had 11 fit players and had to call on a few reggies again today,” Rumsby said on Sunday.

“Had to play Daniel Howe and Daniel Jobson in the centres.

“They were nowhere near fit but played injured for me and were way underdone.

“We’ve just had so many injuries this year. I know I’ve said it before, but it has been a year from hell.

“Just good to have some players back, and we will get a few more back after we have the next two weeks off.

“We’re hoping to finish the year off strong too for the club.”

The other match played on Sunday saw a former Blues captain-coach star as Brenton Cochrane made a highly-anticipated return from suspension to help Moree remain in outright fourth position with a 58-12 win.

Cochrane scored the final try in that match, had a hand in several others and earned three Group 4 best and fairest points as the Boars remained two points clear of fifth-placed side Boggabri.

The Kangaroos had the round 15 bye and moved to 18 competition points, but Moree’s win saw the Boars move to 20.

The third-placed Kootingal-Moonbi Roosters also won in round 15 when they scored a nail-biting 44-42 home ground victory against Werris Creek on Saturday.

That saw them move within two points of second-placed Dungowan after the Cowboys lost a top-of-the-table clash against North Tamworth Bears 20-12.

North Tamworth is now outright first on 26 points, leading Dungowan by two and Kootingal by four.

Meanwhile, the Narrabri Blues won their second grade match 26-24 on Sunday against the Tigers. It was a remarkable comeback win after the hosts trailed 24-4 at the half-time break.

The Blues are now one point behind fourth-placed Dungowan Cowboys on the ladder following their 26-all draw against North Tamworth in round 15 on Saturday.

In the ladies league tag competition on Sunday, Narrabri went down 28-10 against Manilla.

Demi Winter scored both of the Bluebirds’ tries and was also awarded two Group 4 best and fairest points. Kristie Toomey kicked one goal in that game.

Narrabri Rugby League Football Club has the bye this weekend. Its four sides will all return to the field on Sunday, August 21, when they travel to take on Kootingal-Moonbi in round 17 at Kootingal Sportsground.

Boggabri Kangaroos play their round 16 game on Saturday when they host the Roosters in three grades at Jubilee Oval.