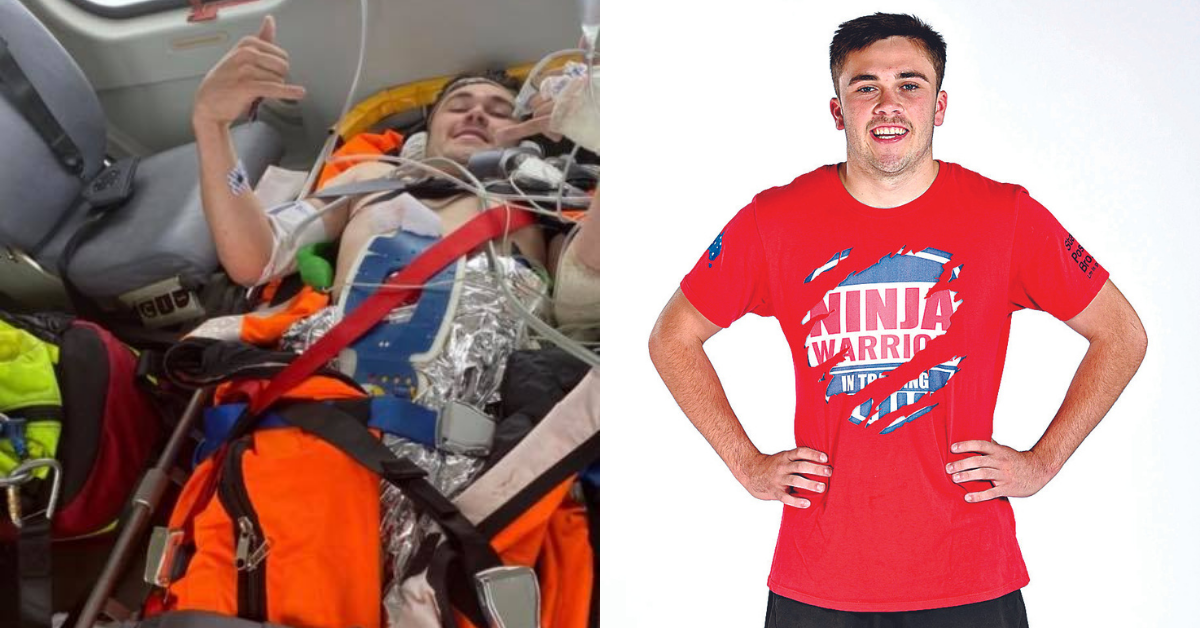 Australian Ninja Warrior's Cruze Morley in the rescue helicopter after being retrieved from Gins Leap.

During a routine training session recently, Cruze Morley, aka the Boggy Ninja, was injured in an accident, one that he really doesn’t want to experience again.

“For the past three weeks I have been walking up ‘Gins Leap’ every day to build my cardio and leg strength. I felt very comfortable going on my own and always have my phone with me,” Cruze said.

“On Tuesday, it started to rain and as I was coming down, the rocks were a bit slippery with some green stuff and next thing I flipped forward.

“I must have passed out and when I woke up I couldn’t feel my legs and reached for my phone but couldn’t get it to work so I said, Siri call 000.

“After a while I tried the phone again to call mum to let her know what had happened,” he said.

“I don’t remember very much except there were a lot of people.”

The first people Cruze remembers seeing were the paramedics from the NSW Ambulance service and his friends Jeremy Smith closely followed by Pete Brien.

The rescue wasn’t easy with wind and rain hampering movements and Cruze said he remembers being very cold.

Due to his injuries, he was placed in a neck brace and on a spinal board prior to being winched off the mountain, into the helicopter and taken to Royal North Shore Hospital.

The drama didn’t end there.

“I woke up while having investigations done and didn’t know where I was and I started trying to get out of the machine,” Cruze said.

“The staff had to call security and give me more drugs to calm me down before the staff could finish the investigations”.

Good news arrived two days later when he could feel his legs again.

“The staff came in and was poking my leg and I said, I can feel that,” Cruze said.

After two days in hospital, Cruze was discharged and had a few days with his uncle prior to coming home to Boggabri.

He does have some nerve damage and is resting up at home under the guidance of his doctor and physiotherapist.

Cruze said it is amazing how much support he has had.

He was without his phone for five days and when he got his phone back there were hundreds of messages from family and friends.

A lot of the ninjas like Ben Polson, the production manager, his publicist and others associated with Australian Ninja Warrior had sent messages.

The Boggabri Public School students wrote letters and made cards for him.

Season six of Australia Ninja Warrior is not very far away and Cruze is hoping to get back into training within a few weeks.

See more from the Boggy Ninja: