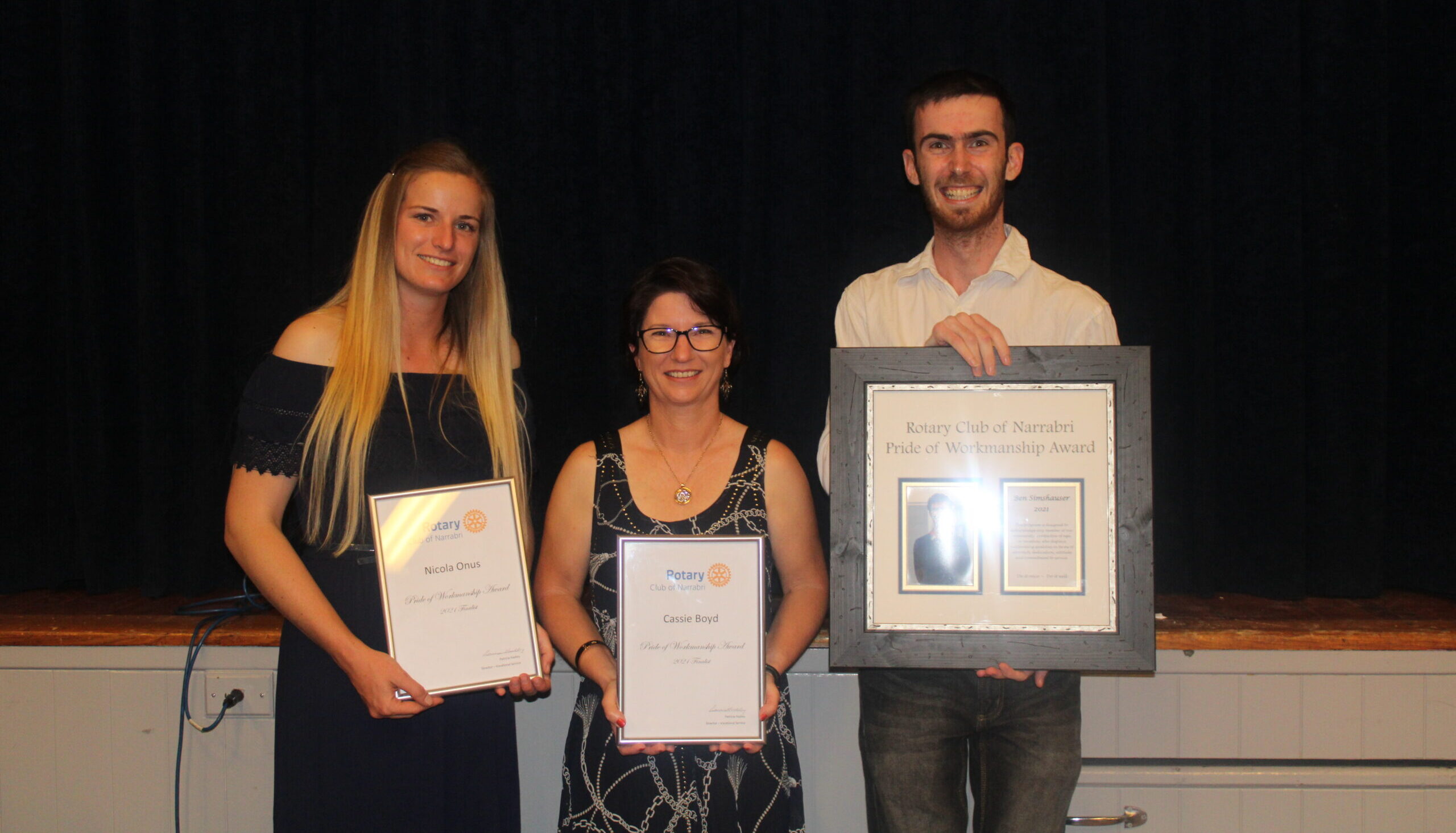 On Thursday, November 18, locals gathered at the Narrabri RSL to celebrate the finalists of the 2021 Pride of Workmanship Awards.

Ben Simshauser, web developer at Tiemens Creative, was crowned the winner for his outstanding work ethic.

“I’m honoured to have been nominated and I’m very surprised and proud to have won the award this year,” Mr Simshauser told The Courier.

“It was great to hear all the amazing work the nominees have been doing around our local community.

“I’d like to say a big thank you to our local Rotary Club for running this amazing award every year.”

His fellow finalists were Cassie Boyd, station manager of 2MaxFM, and Nicola Onus, technical officer at the University of Sydney’s Plant Breeding Institute.

Rotarians, the finalists and their loved ones were present on the night.

The celebratory event comes after massive delays due to COVID-19, with the winner traditionally announced in winter at Rotary’s annual changeover dinner.

For that reason, outgoing president at the time Grahame Herbert presented the winners and finalists with their accolades.

Mr Herbert said it was a relief to finally be able to host the event.

“It was a very successful evening in the end, after a few false starts due to the pandemic,” he said.

“But we all had a great night.

“Numbers were down on previous events, again due to COVID, but we were still able to invite each finalist and their loved ones to attend.”

Mr Herbert, who sat on the independent judging panel, said picking a winner was difficult.

He, along with two other Rotarians and one member of the local community, were tasked with the tough decision of picking just one nominee to win.

“I only wish we could’ve given them each the title, because they were all very deserving,” he said.

“And we had a decent number of nominees this year, so narrowing it down to just one winner was such a tough job.

“But we’re pleased to offer Ben the award, he’s a very hard worker and active member of the community.

“He does plenty in the local area, and isn’t afraid to get in and have a go where needed.”

Darrell Tiemens also spoke highly of Mr Simshauser, who he’s employed for the last four and a half years.

“Ben has great drive and some very entrepreneurial ambitions, I’m just so proud of him,” Mr Tiemens said.

“I’ve seen him develop so much since he started work at Tiemens Creative, and I look forward to watching him continue to grow.

“He’s a diligent, hard worker and – while I was just as shocked as he was to learn he’d won – I feel he is very deserving of the title.”

The Rotary Club of Narrabri encourages locals to begin thinking about candidates for 2022, ahead of next year’s nominations opening around March.

“And that’s not just a message to employers – anyone can enter a nomination form.

“Rotary’s Pride of Workmanship Award is a very important measure in setting the standard, so we encourage you to highlight those going above and beyond in their day-to-day lives.”